Knee Deep in Promises is a story of love and loss. Written by Deborah Morgan and directed by Paul Goetzee, it opens with the death of Dean’s Mum, Sadie, and his attempts to deal with it, while keeping his promise to her to give her a truly unique send off.

First things first, Dean (Lewis Bray), has built his Mum a one of a kind coffin made from Weetabix boxes, much to the disgust of neighbour, Trish (Sharon Byatt). It quickly becomes clear that Dean is not handling things very well and that there are some issues in his past that he has never dealt with which aren’t helping. He starts telling Trish about his relationship with Hayley (Debbie Brannan), a girl from school who went from best friend, to unrequited first love, to bully, and everything in between.

Something terrible happened, and it looks like Sadie’s death may just be the catalyst which leads to Dean talking it through at last. 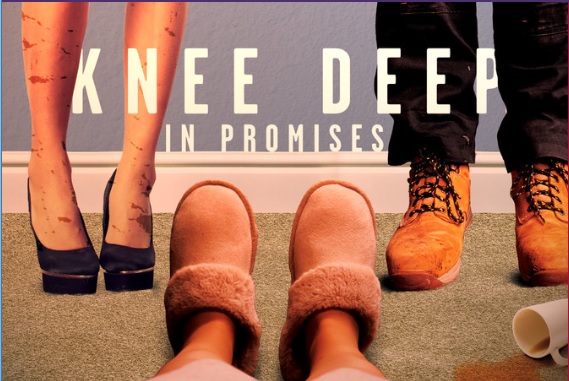 The set is an old-fashioned living room, complete with garish floral wallpaper. The Weetabix box coffin is a permanent reminder of the mood of the play, and the bright yellow cardbox clashes well with the meaning behind it. A painted window doubles up as a projection screen where Dean’s schoolwork and handwritten notes are shown.

The play utilises surreal dark humour which prevents the tone of the play dropping too low. It does however, on occasion, go off on such a tangent that any realism in the play is lost and it is difficult to know whether or not this is deliberate.

The consideration of whether promises are iron-clad vows which must be kept no matter what, even when the person promised has passed on, is an interesting idea. Unfortunately the play seems to lack any real pace which explores this idea to its full effect. While there are some thought-provoking moments, at times it just feels far too slow. The asides where Byatt defines words which have been used in conversation particularly drop the pace, and feel like an attempt to inject an element of originality into the script with no other real purpose.

Brannan’s performance as Hayley is extremely special. Combining some lovely comedy with painfully sad tragedy, her portrayal is captivating and very natural. Fully developed characterisation together with beautiful acting create a character which the audience can fully empathise with and see as a real person with a life outside of the play.

This is a dark play which uses black comedy to explore all of the facets of loss and what happens to the people left behind. Overall, it is a well-performed piece which will make you smile.

Knee Deep in Promises is being performed at the Royal Court until 19th October 2019. Tickets are available here https://liverpoolsroyalcourt.com/whats-on/knee-deep-in-promises/