L’elisir d’amore (the elixir of love or love potions) is a comic opera in two acts by Italian composer Gaetano Donizetti with libretto by Felice Romani. Written in 1832, today it is one of the most frequently performed of all Donizetti’s operas. Since its first showing in 2007, Annabel Arden’s staging of this heart-warming romantic comedy has become a staple in the Glyndebourne repertoire and was a great way to mark their return to Liverpool after a forty-year absence.

We open to Lez Brotherston’s exquisite village square complete with a working water pump and backed by an imposing manor house. As the harvesters take a well-deserved midday break from the sweltering heat, lovesick peasant Nemorino (Sehoon Moon) admires from afar the object of his affection: Adina (Benedetta Torre) – the original trouser-wearing girl who won’t be told and whose stubbornness is implicit in her name, that of a flower that clings to the rocks. As she reads about Tristan and Isolde, she mockingly relates how the legendary lovers were enchanted by a magical love potion. 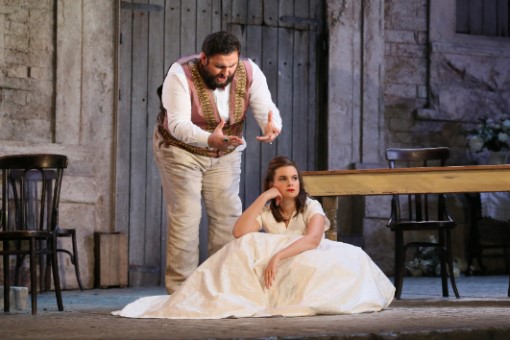 The parochial life of the villagers is thrown into disarray by the arrival first of a troop of soldiers led by dashing Sergeant Belcore (Matthew Durkan) and then by travelling quack Dulcamara (Misha Kiria) accompanied by a tattooed mime artist (Maxime Nourissat) who on arrival hacks into the electricity supply to power a somewhat surreal video advert for Dulcamara.

Belcore boldly proposes marriage to Adina who plays her usual hard to get; in turn she warns Nemorino that her capricious nature means she will never settle down. In his desperation, Nemorino turns to Dulcamara for a love potion and suitably emboldened he assures Adina she will be his in just 24 hours, although to spite him she agrees to marry Belcore in six days. But when the soldiers receive an order to leave town the next morning, everyone’s plans are thrown up in the air, further compounded a rumour spread by Adana’s friend Giannetta (Carrie-Ann Williams) that Nemorino’s uncle has died making Nemorino the most eligible of bachelors around. Now who will win the day?

Comic drama abounds in this feel-good production with a lively performance of Donizetti’s charming score from the orchestra, a cast that can act, dance, sing, and deliver comic timing, and Arden excelling in bringing a gentleness and warmth to the piece overall.

Torre’s Adina is suitably beguiling whilst Moon’s Nemorino is full of boyish bashfulness with Durkan in perfect contrast as the swaggering and confident Belcore. Despite being sat centrally I did struggle to hear these three at times and although Moon and Torre delivered their respective solos to some aplomb in the second act, I couldn’t help but feel there was a certain chemistry lacking between them.

In contrast Kiria’s charismatic showman was full of exuberance and flair as he perfectly orchestrated with Nourissat’s delightful mime routines and they delivered some wonderfully raunchy scenes that once seen will not be forgotten in a hurry. The Glyndebourne Chorus under the direction of Aidan Oliver were tightly choreographed with everyone always having a role to fulfil on stage.

A special mention must go to Carrie-Ann Williams whose transformation from close friend of Adina to fortune-hunting rival was perfectly delivered with her expressive acting and delightful voice a joy to behold. One to watch.

This was a matinee performance intended to bring opera to a younger audience and in that it succeeded judging by the number of school children attending, and I think the concept of the humorous and thoughtful introduction should be rolled out to all productions irrespective of audience age.