The Importance of Being Earnest - Omnibus Theatre

The Omnibus Theatre presents a belly aching witty and wild immersive theatre experience fit for the brave. With a contemporary take on Oscar Wildes ‘The Importance of being Earnest’, performed by seven fantastic actors; Alex Phelps (Playing Simon Slough), Ben Mann (Josh), Guido Garcia Lueches (Algernon), Louise Goodfield (Cecily), Rhys Tees (Lane), Susan Hoffman (Lady Bracknell) and Trynity Silk (Gwendolen), an impressive consistency of charisma and performance energy throughout this play was displayed, keeping the audience on the edge of their seats (or in some cases, out) for the entire duration. Bearing in mind the quantity of improvisation required from the actors and knowing that anything could happen at any given moment, it was a fantastic piece of theatre that showed excellent skill from the actors. Hats off to Josh King the writer of the show, who clearly knows his craft well and Director/Producer, Simon Paris, for lifting his work off the page. 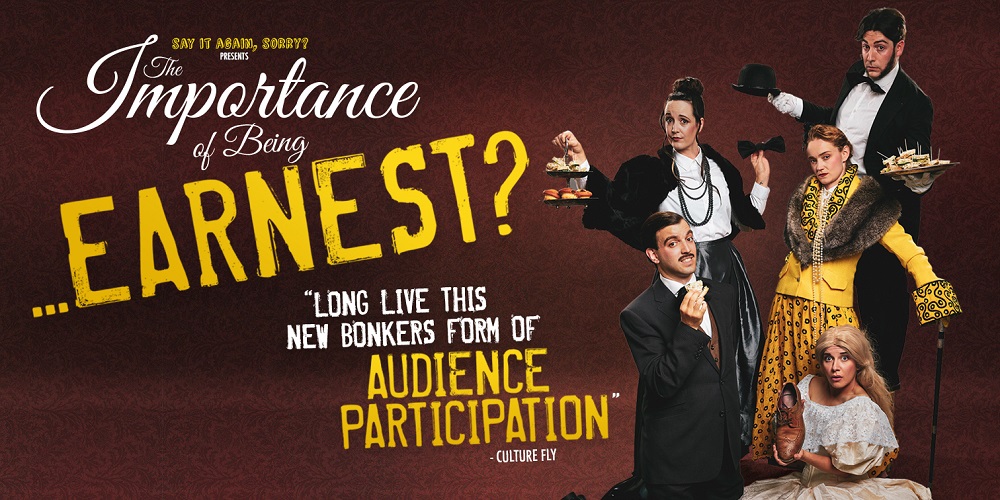 My greatest compliments however go out to the cast, it was undeniably evident that the audience were enthralled by this comedy and left gasping for more. A special shout out to Guido Garcia Lueches, who slipped into the role of ‘Algernon’ superbly. From the very first step into the theatre down the last line, the audience were in stiches at his classy and diligent approach to this hilariously written part, so much so you could feel the audience just waiting for his next line. The play mixed 2020 with an 1895 drama almost effortlessly, and whilst being consumed in the comedy, the story was still clear and crisp.

On the production side, the costumes were fun and flamboyant designed by Silk, one of the fabulous actresses, needing no more and no less. The set was minimalistic, with nothing extravagant involved however the simplicity worked perfectly for the play. As it was driven by the acting, the production elements were not overly impressive or outrageous, but it was a suitable fit for a small studio and intimate play in a regional theatre. If you’re looking for a production spectacle this show perhaps would not be suited, however if you want something up close that gets your brains flowing and the giggles going, it’s the perfect evening for you.

Overall, this show was totally original, cleverly written and like nothing else on at the moment. I would urgently recommend this to all actors as it is a masterclass in comedic theatre, for couples who love to laugh and anyone who fancies a fantastic night at the theatre. An absolute MUST see!