This year’s Christmas pantomime at St Helens Theatre Royal is Aladdin. Aladdin tells the story of a poor son of a laundrette and how he becomes rich enough to marry the princess. It’s a very typical panto story and this is a brilliant, traditional family pantomime.

Si Foster writes the show and his script is brilliant. It keeps the story at the focus of the show whilst putting in plenty gags that you expect in a pantomime. Jane Joseph directs and she does a great job of making the most of a small space. Nazene Langfield’s choreography is fantastic and the music, under the direction of Jordan Alexander, sounds brilliant despite their being only himself and drummer Will Brown is the band. The set and costumes from Regal Entertainments Ltd are perfect for the show. A bit more gold and spectacle wouldn’t have gone amiss from the Act 1 finale but on the whole the design was full of colour and fit the panto genre very well. I was also disappointed by the flying carpet scene. I expect to see a carpet fly on stage when I see Aladdin but instead this scene was replaced by a 3D sequence. 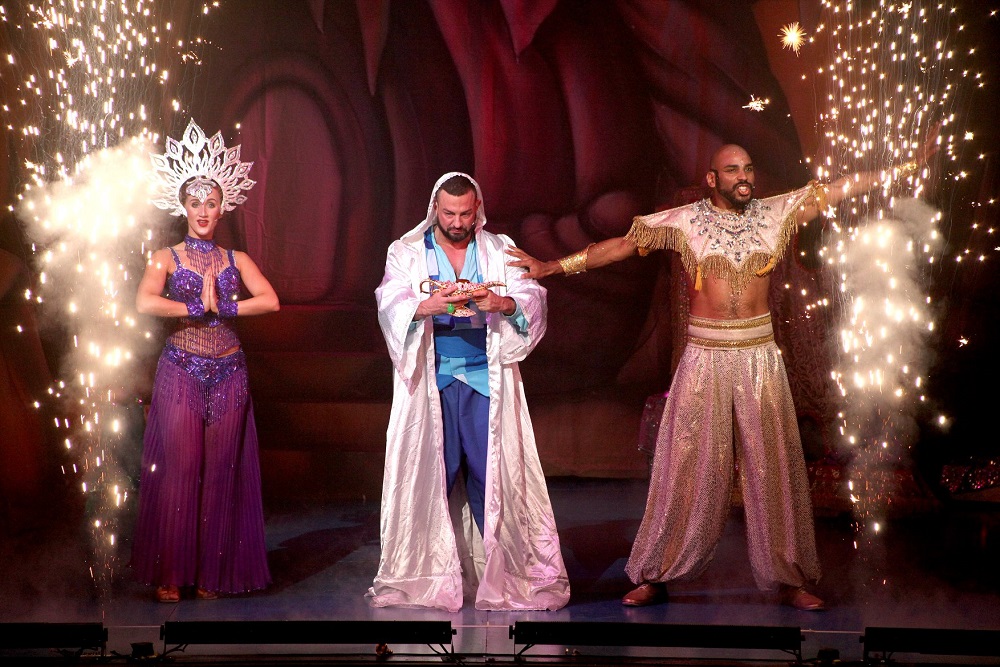 Strictly Come Dancing’s Robin Windsor headlines the production as Aladdin. He is fantastic in the role. He has a great rapport with the audience, he surprises with his lovely singing voice (even though he doesn’t sing a lot) and he gets plenty of opportunities to show off his phenomenal dance ability. Scott Gallagher plays Wishee Washee and he is one of the best panto comics I’ve seen. He is consistently funny, he has the audience on his side immediately and he delivers one of the funniest song sheets ever (which is also thanks to the sound team and musical director being so on the ball). I did find the song sheet didn’t work so well without an actual song though as it meant the audience couldn’t join in properly. Si Foster, the venue’s regular dame, plays Widow Twankey and he is great. He doesn’t have such a big personality as some dames do but he is great in the show.

Olivia Sloyan is the perfect Princess Jazmine. Her vocals are very strong and she brings the character to life brilliantly. It is a shame there aren’t more moments between her and Windsor to show the romance between Aladdin and Jazmine developing but she still manages to shine in the role. The lack of Emperor in this production gives Jazmine more chance to speak for herself and it also gives more for PC Noodle, Timothy Lucas, to do. Lucas gives one of the best comic performances in a pantomime I’ve seen. He is just hilarious and he also gets the opportunity to showcase his very strong singing voice. There does seem to be a lack of conflict for Jazmine with no Emperor though and there is no urgency for her to be married.

Phillip McGuinness gives a very strong performance as Abanazer. He’s not the greatest singer but he plays the part superbly. He is perfectly terrifying and evil and he consistently gets the boos from the audience he wants. Kai Jolley plays the Genie of the Lamp and he does a good job. He characterises the role fairly well although I would have liked him to be a bit bigger and OTT. His singing voice isn’t the greatest and he often gets drowned out by the rest of the cast. Jenna Sian O’Hara as the Slave of the Ring is spot on. She has a brilliant stage presence, brings the character to life perfectly and her vocals are lovely.

Aladdin is a fantastic family pantomime that keeps story, tradition and comedy at the heart of it. If this is your local pantomime, be sure to catch it before it closes on 12th January. http://www.sthelenstheatreroyal.com/show/?show_id=873602866