I have to admit to being somewhat surprised (in a good way) at Tom – The Tom Jones Musical at the Lowry tonight. I was expecting a romp through the back catalogue of Tom Jones’ greatest hits as his journey through the decades was played out on the stage. What I saw was a beautifully crafted story of the Welsh icons life in more of a musical play than a traditional full scale musical.

This is a show that follows Tom from his teenage years growing up in Pontypridd, Wales fighting to make his way in the industry they call “Pop”! Following a brief relationship with Linda (Elin Phillips) Tom (Kit Orton) marries his young sweetheart following her falling pregnant. The show depicts Tom’s dedication and love for his wife throughout and his passion for providing for her and his young son. Linda puts up with a lot from Tom, endless nights out performing and time away from home in his attempt to make it in the music industry. It is a relationship that stood the test of time and lasted for an incredible 59 years before she passed away earlier this year. 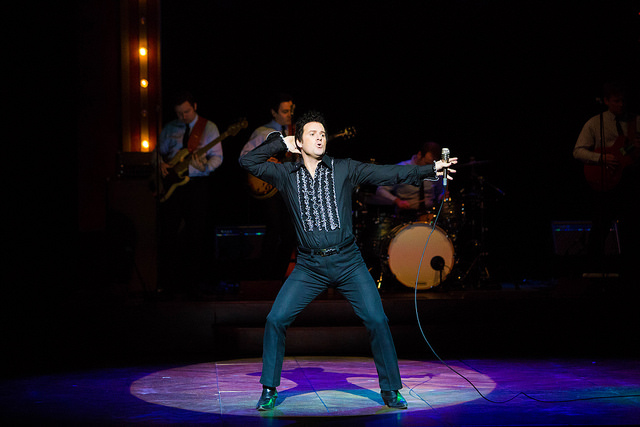 Phillips plays Linda with feeling and her support for her husband can only be admired. I very much doubt many relationships in this modern day would stand the test of time as theirs did. Orton as Tom is superb in every way, he looks like him, acts like him and most importantly sounds like him. They are fewer songs in this show than you’d expect, in fact it is 20 minutes before a line is sung, but each one is delivered with passion and feeling and also your fair share of hip shakes and pelvic thrusts.

The show is narrated confidently by Phylip Harries taking us through the aspiring pop stars life from teenage years through to his first hit ‘It’s Not Unusual’ which is where the show ends the narrative and for me where it should have ended full stop. Sadly the need was seen, and maybe demanded by the audience to then launch into a mini concert with songs such as ‘Delilah’, ‘Pussycat’ and ‘Sex Bomb’ and as spectacular as this was it just felt they were shoe horned into the evening to please the audience. ‘Sex Bomb’ was released some 34 years after the narrative of the show ended.

There are some solid supporting performances throughout this show, most notably Richard Corgan as manager Gordon Mills who despite promising to search the world for a hit song for Tom has to be told by Tom the perfect one is right under his nose and ready to be offered to Sandie Shaw! 7 of the cast as well as playing supporting roles during the night also double up as band members under the supervision of musical director Greg Palmer.

Sean Crowley has designed a simple yet effective set using a number of gauzes flown in and out projected upon to give realistic backdrops. Jason Taylor’s lighting design complements the projected set perfectly and sound from Mike Beer is well balanced.

Tom is more of a musical play than a musical and that is what makes it special. With fantastic performances from everyone on the stage. Llongyfarchiadau mawr i bawb.