What an utterly HUGE disappointment! Totally underwhelming, this 'show' failed on almost every level!

First - allow me to conduct you to the advertising for this show on The Lowry's own website; "Get closer to the action than ever before as this interactive and explosive family show takes you behind the scenes of your favourite films to discover the science and secrets of creating movie magic."

The words which are important in this are 'get closer', 'interactive', 'family'. And 'behind the scenes'. If by 'get closer' they mean remain in your theatre seat and watch it on stage - the same distance or even further than you would be in a cinema or at home; if by 'interactive' they mean asking for a volunteer to come up on to the stage to help like they do in pantomime; if by 'family' they mean only those old enough to be able to keep up with the incessant pace, the language, and the films chosen; and if by 'behind the scenes' they mean demonstrating an effect in lab conditions, then perhaps they can get away with this!

Also on the Lowry's own website there is a trailer for the show. I have just watched this trailer now and not only were the effects shown on the trailer completely different from what we saw last night - the people doing them were not the same either.

I am not blaming The Lowry for any of this, please let me make this clear. The Lowry only print such things in good faith, having been given this information from the production companies themselves. I am merely pointing out, that the first port of call for majority of the audience when thinking of visiting a show, is to see what the show is about and that information is on the theatres' own websites. 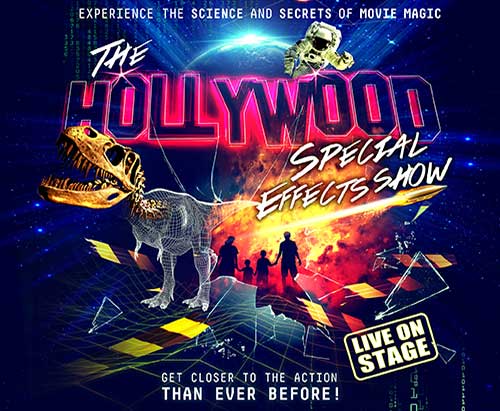 The audience tonight consisted of a rather interesting mix of families with some very young children, a few with early teens, and some older 'children' like myself who thought they might learn something. I learned nothing, and I would say the vast majority of the youngsters came away disappointed and not understanding. Of course they all liked it when they produced big flames and big bangs on stage, and fired an air-cannon into the audience at the end; but the build-up to these things and the way they were explained (or in some cases not explained at all) went over the young ones' heads.

Some of the effects also simply did not work. On one occasion they attached a squib to the inside of a lab coat for one of the team to wear whilst a young volunteer from the audience was given a banana - yes a banana!! - to shoot him with. But the explosion didn't go off. It wasn't the only failure.

There was some very interesting information imparted last night that the young members of the audience would have been a lot more interested in and wowed by if the cast had slowed down, shown them properly and in a language and way that young children can relate to, and indeed made it interactive, but sadly of course they didn't.

For example, they told us what the original stage blood was when films were black and white, and told us what they use now, and even told us how to make it, but unless you already knew these things, you would have had no chance of remembering them from last night. 1) Chocolate syrup 2) cocoa, water and food colouring!

They talked about the famous Wilhelm Scream and how this particular scream has so far been used by Foley artists in over 200 films, and some directors use it in every film they make as a kind of ‘joke’, including George Lucas, Tim Burton and Quentin Tarrantino. But again, all of this would have gone completely above the target audiences' heads.

Basically everything went far too quickly and glossed over, trying to fit too much into the time. All the silly jokes they did - for example playing 'Unchained Melody' whilst the girl helped the man to stir something in a bucket was understood by only a small percentage of the audience. [It was a Mickey-take of a famous scene in the film ‘Ghost’].

Act one ended with lots of smoke and bright lights glaring straight into the audience; and if you were lucky enough, for it only appeared for a second at the most, you might have been able to see the head of a dinosaur appear behind the smoke before the lights went to blackout and the curtain came down. I expected Act 2 to start with an explanation of how they were able to create that effect, but nothing like - they continued as if nothing had happened. Fortunately I already knew, but this 'secret' remained unexplained.

The information provided in the programme - which in reality isn't a programme but a huge wall poster of the show - has more pieces of interesting film trivia than were provided on stage.

Thank you RIP Productions Ltd, and Nick Brooke Ltd, for what was a great premise, and what should have been a huge success, but fell down right from the start, and never got up again.