It’s always exciting to see new companies performing original work. However, I was left scratching my head after witnessing R Kid’s production of ‘Angels with Dirty Accents’. The main problem is the plot, it is incredibly hard to follow.

This was the company’s first performance of this production and at times their lack of experience was evident. The show started 15 minutes later than advertised, with no explanation. The stage manager could be heard cueing lights and there was a very awkward moment at the end of Act One as no one knew whether it was an interval or not.

I was impressed with the set, upon entering the theatre it was clear we were being transported to the streets of a city where a group of homeless people have set up home. There were also some hilarious props in the show. 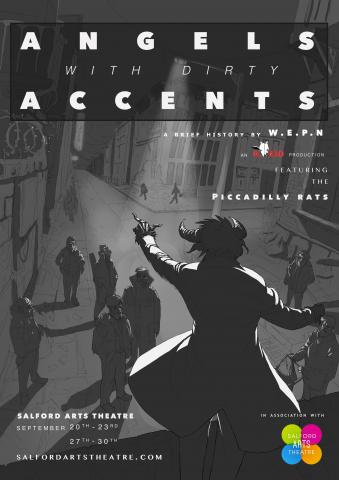 As the show progresses it becomes clear that these people are not homeless people as we know it, however they are in fact people who have died and are stuck between heaven and hell. All of them are desperate to get into heaven. However, an illegal substance is stopping them from getting in.

The acting was solid throughout. It was evident the cast had put a lot of work into their characters, all of them remained in character even when they weren’t speaking. It’s just a shame they were let down by a bizarre plot.

For me the problem with the plot is that it takes too long to understand what is actually happening and by the time I did get it I didn’t care anymore. This production can be trimmed significantly by shorting scenes and cutting characters.

Another issue for me was that there were far too many characters in the show. The plot didn’t seem to have a protagonist, so instead of becoming emotionally invested in one character’s journey I was following ten different characters.

This venue seemed to struggle with some lighting issues. At times characters were speaking and they weren’t being lit, or the spotlights fell short of their intended targets. Perhaps the show would benefit from an additional technical rehearsal.

While I admire a new company bringing original writing to our attention I simply struggled to grasp Angels with Dirty Accents. The production was well acted, but sadly not even the best actors could save the show.