Our Town is the opening production of The Pendleton Season of Shows for 2018/2019 which was in performed in the extremely versatile Ben Kingsley Theatre in the heart of Pendleton Sixth Form College.

This timeless drama piece of life in the mythical village of Grover’s Corners, New Hampshire by Thornton Wilder showcases how precious life is and how we forget to enjoy every single moment as we go through the struggles and rhythm of everyday life and daily routines. Originally performed on Broadway in 1938 this 80year old classic seems just as poignant now in the 21st century as it was almost a decade ago, the only difference is the clothes we wear and the advances in technology but the message remains the same.

Joseph Meighan the Associate Theatre Director has a fabulous reputation in the North West for delivering shows of a professional status with his fantastic eye to detail and his interpretation on the numerous shows he has had his name to, described as the Cameron Mackintosh of Manchester I was intrigued to witness how he could pull this out of the bag with an extremely wordy play delivered in 3 parts. 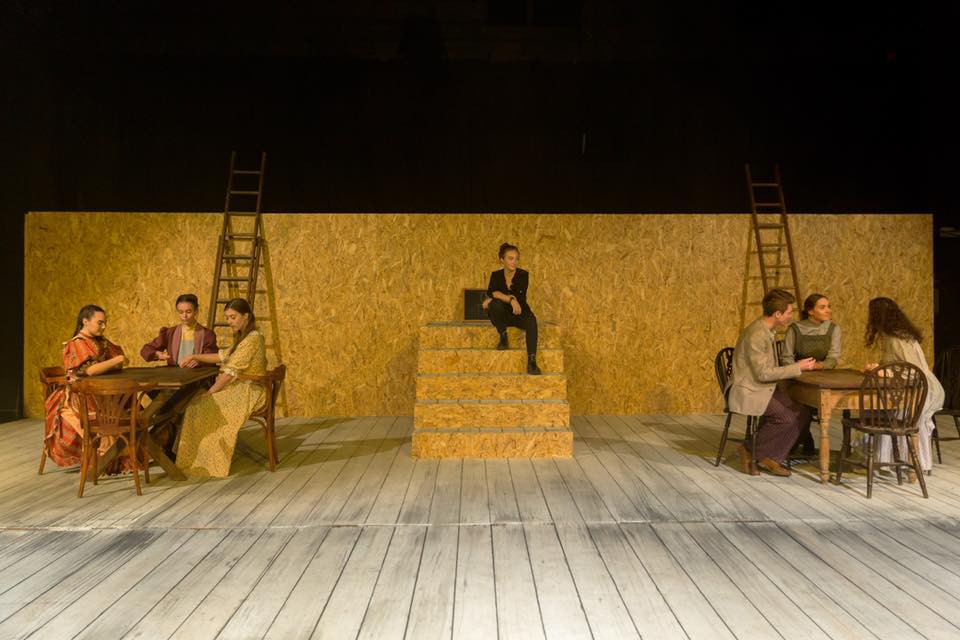 However true to form with his colleague producer Neil Bennett and his strong cast of teenage guys and gals Mr M and his team have created yet another golden nugget that would be worthy of any professional play in any of the North West Theatres, what I witnessed this evening was the highest class of acting delivered by these wonderfully talented individuals.

The Production Team created the perfect set design for the cast to utilise throughout the play and the lighting design created the ultimate atmospheric ambience for the storytelling, huge credit to the Production Team as no show could go on without this fantastic behind the scene crew, special mention must go to the fantastic costumes as they were exquisite throughout the show adding a visual elegance of authenticity of the early 1900’s.

Eve Rowan plays the Stage Manager a kind of narrator and tour guide through Grover’s Corner who invites you to eavesdrop on this tightly wound community selecting what the audience get to see, by using her power to ask characters to leave the stage, to enter the scene and to pose questions that help us interpret the play. As the play and events unfold it ultimately tells the story of Emily (Annie Welsh) and George (Tommy Seymour) two unremarkable teenagers growing up in the small town throughout the cycle of life. Eve not only delivered her extensive lines timely and perfectly but put her formidable unique interpretation on the character, this young ladies stage presence is of the highest quality as she enchanted the audience with her every word throughout. I do believe this young lady could read the telephone book and have you enthralled with her silky soft tone and fabulous expressions which is a remarkable talent for an actress whom is just beginning her career as this standard of delivery would be worthy of any accomplished thespian.

The play encompass two families the Gibbs and Webb’s played by 8 perfectly casted members Dr Gibbs was played by Teddy Jones, Mrs Gibbs by Lizzie Lomas, Rebecca by Imogen Ogden, George by Tommy Seymour, Mr Webb by Chris Wagstaff, Mrs Webb by Olivia Brindley, Wendy by Holly Gibson and Emily by Annie Welsh all of which are gifted and skilful performers that delivered the highest calibre of acting throughout the evening.

The rest of the crew also enhanced this amazing masterpiece of Our Town that left me feeling quite reflective on the powerful message it conveyed through the script, it’s very rare you leave an auditorium with food for thought and has you thinking about you own journey in life as it certainly makes you think how we can all be caught up in the conveyor belt of and never really stop to appreciate the here and now, mindfulness at its finest living in that moment and loving life.

Colossal congratulations to all involved in this incredible gem of a production of Our Town, and I cannot wait for the upcoming creations of this season at Pendleton.