Return To 1421: The Olde Towne and Medieval Manchester

As the title of the tour suggests, it takes you back to Medieval Manchester, and to one of the largest extant complexes from that period in the north of England. Under the expert, but rather rushed guidance of historian and writer Jonathan Schofield, we first visited the beautiful old building of Chetham's School of Music. 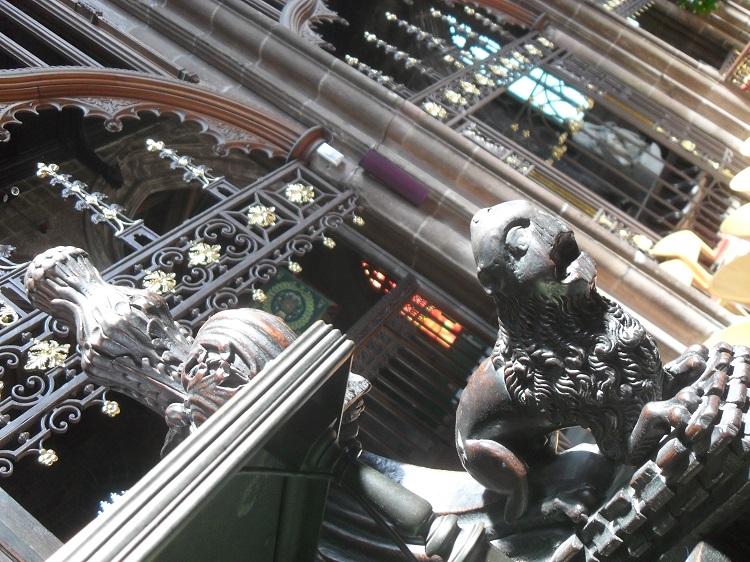 Built on a rocky bluff on the banks of the river Irk, this land originally had a small castle built on it, and then a fortified manor house, and then, in 1421, the building that we see today. This particular building was originally for housing the priests of the newly established Collegiate Church (now Manchester Cathedral), and indeed this building has remained very much unchanged over the centuries. Walking inside is like stepping back into history, with dark corridors and dark oak Tudor doors, high vaulted ceilings and cubby-holes and secret passages galore! It is a two-story building, but the tour doesn't take you upstairs. That is where the head of Chetham's School lives; but we were given a tour of majority of the rest of the building, built of local 'Manchester' sandstone which gives it its rather lovely and unique pink hue. We were taken into the Medieval kitchen (now The Association Room), The Baronial Hall, a small 'cloister', and The Audit Room, before being taken into the main attraction of the tour, the Library.

Schofield spoke very quickly cramming as many facts as possible into the hour we spent inside Chetham's. It all felt very rushed and I was unable to simply take everything in. There were some lovely little anecdotes, and a few attempts at humour, which with the group I was with went down like a lead balloon, however, the history side was extremely interesting. For example, during the Civil War, Manchester was Parliamentarian, whilst all around, especially just over the river in Salford, they were Royalist, and the building was quite badly damaged during this war. He spoke about Humphrey Chetham, and his rather interesting coat of arms bearing the image of a griffin; he spoke about the legend of the eagle and child; he told us of John Dee, and how Dee was not only the inspiration for Shakespeare's The Tempest, but how also he would sign himself as 007. And so, the joke goes that in the early 1600s 007 sent a letter to M (the sign of the reigning monarch).

Inside the Audit room there was also a very rare and priceless love-seat with the Chetham's coat of Arms of the Queen Anne period, as well as Humphrey Chetham's own chair too.

The library though really was the piece-de-resistance. Wood-panelled and crammed with ancient tomes, this is the world's first public library and still very much in use today! Originally the books were chained to the shelves (to stop thieving since the books would have been worth more than a man's wage), but then gates were added to the ends of aisles and they were locked when someone went down the aisle and only opened once the reader had finished and had returned the book to the shelf. Adjoining the library is The Reading Room, and we sat where many famous and illustrious names have sat before us, including Winston Churchill, Karl Marx and Friedrich Engels.

Before going to the Cathedral, we made a very short stop at the bottom of Hanging Ditch (so called because it hung above the river - nothing to do with the killing of criminals!). We were shown the original bridge over what would have been the river Irwell - still very much evident today although now no water flows under it and it is built up with buildings all around. 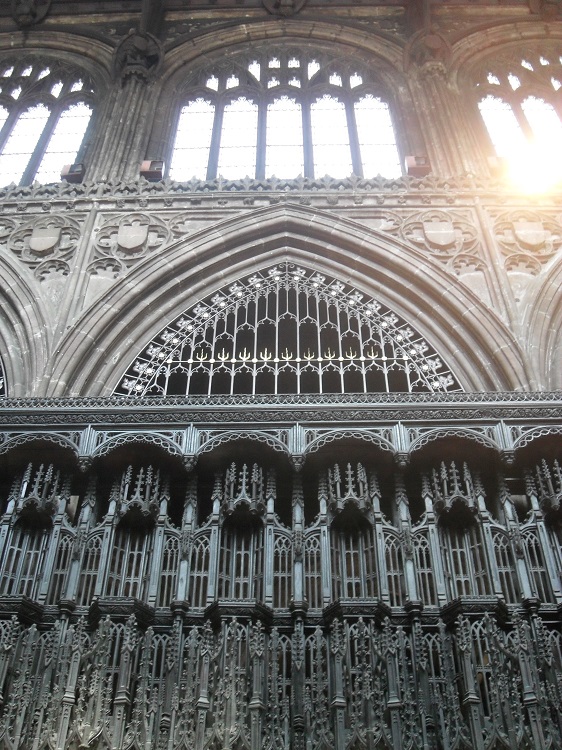 We then went into the cathedral for the second and final part of the tour. This part was even more rushed as we were herded from place to place in order to finish before 5:15pm. We stood in the central part of the church between the main front door and the medieval screen, and were told that we were standing in the largest nave in Great Britain. The side aisles in other churches were not normally part of the main central aisle (or nave) as they are here. We were shown the three windows dedicated to the three saints of the cathedral. St. George, St. Mary and St. Denis, and then taken to the side of the church that was damaged by a bomb in 1940. Here the windows are plain and we were shown the war damage on the statue of Humphrey Chetham. The most beautiful part of the cathedral though is undoubtedly the quire. Intricately and beautifully carved dark oak and incredibly detailed. Not without humour though, as Schofield was more than keen to show us the humorous and rather sarcastic side to the jocular and secular carvings underneath the heavenly ones above.

At 5:15pm we were then invited to stay in the cathedral to hear the choristers sing evensong. They made a truly beautiful and 'heavenly' sound. However, if you didn't wish to stay then you were absolutely free to leave at that point as the tour was over. Both Jonathan Schofield and Dympna Gould (Cathedral Visitor Services Manager) did stay behind though in case any had any questions. For once there was absolutely no rush and they were happy to spend time chatting once it was all over.

An extremely interesting and informative tour, but it could really have been a little longer and we should have been given a little more time in each room to explore things for ourselves. However, I can still highly recommend this. I have been living in Manchester for over twenty years and I have seen things and learnt things today that I had no idea about previously.

For more information on this and other events run by Manchester Cathedral then either pop in to their visitor centre, or visit www.manchestercathedral.org