The Roundabout Theatre is self-contained, in-the-round theatre with state of the art LED lighting that will be outside Theatre Clwyd for two months.

Sticks and Stones is written by BAFTA nominated Vinay Patel and directed by Stef O’Driscoll and tells the story of how using the wrong words can have a huge impact on everything in your life.

The three actors, Charlotte O’Leary, Katherine Pearce and Jack Wilkinson are incredible in this extremely physical piece. From the get go they are constantly moving, certain words having certain movements, using lighting and movement to move around the space and take you from one scene to another. Wilkinson is brilliant, changing from one character to another with such ease and a change of accent. 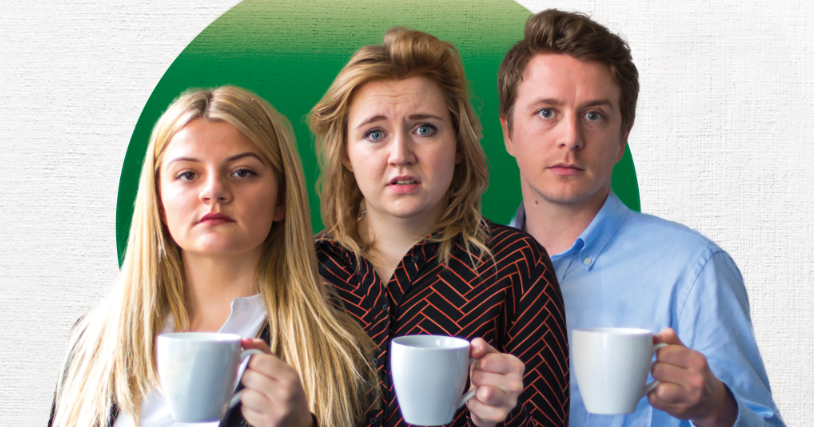 O’Leary is hilarious with her characters, from daughter to exercise crazy manager to office worker, pulling the funniest faces and literally crawling with awkwardness. Pearce stays as the same character and is hilarious. You see so many different emotions and situations with Pearce, it’s a wonder she knows where she is up to. As this is played in the round, sometimes you can feel a bit left out at points, but they make sure you are included, just make sure you are looking in the right place. There were a few times certain movements didn’t happen were they should have but the actor just added it in when they could which added to the humour and shows live theatre at its best.

Lighting plays a huge part in Sticks and Stones and how they manage to create such effects is just brilliant, especially when from the outside it looks like a big blow up tent. Peter Small has created great lighting that really helps break the space up and create atmosphere.

Jennifer Jackson and Simon Carroll-Jones have put in so much work with the movement in this play and it’s the amount of movement and different styles that help create an incredible piece of theatre.

If you get chance to get along to see Sticks and Stones you will not be disappointed. It is a different experience that will leave you thinking about what you say and the effects it can have but will also have you laughing and feeling exhausted from the amount of physicality. https://www.theatrclwyd.com/en/whats-on/sticks-and-stones/