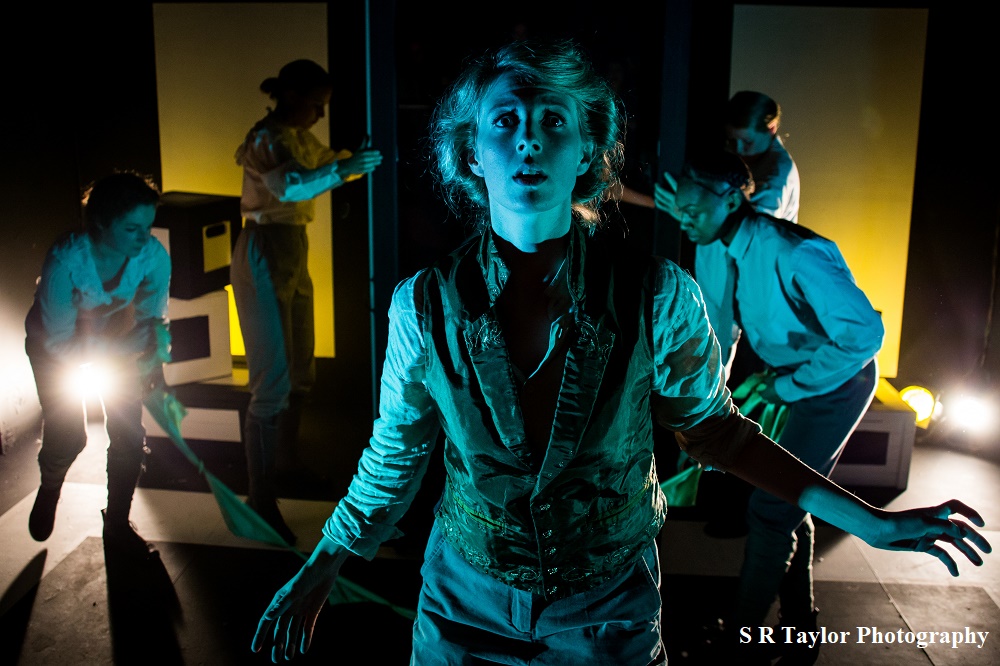 The Finborough Theatre are not shy of producing plays that are challenging with tonight’s play being no exception. It was last staged in 1992 at the National Theatre with a much larger cast and received mixed reviews. The question was will it work in a small theatre with a significantly paired down cast?

The set is simply staged with black and white a theme that is repeated throughout the play which appears to be symbolic and connected to the conscious decisions made by the inventors. At the centre of the stage is a ‘water closet’ which starts its life as a banner for peace and this is used both for comedic effect (due to lots of toilet noises including flatulence), and to provide a link to other parts of the play.

Directed by the lauded Tatty Hennessy, his production and indeed the entire tour aims to bring the art and practice of theatre right back to its earthy, ethereal, roots by bringing Shakespeare into the square again.

Setting a show within a show can be a very dangerous game and we have all seen many such plays fall at the first hurdle along the way. However, even 70 years after it first played in New York City, Cole Porter’s “Kiss Me, Kate” still has all the wit and punch it needs to draw in a jam packed theatre and deliver a rip roaring ride of clever gags and a fabulous story.

With the modern climate of social media and immediate fame, Pressure’s story of the unsung heroes of the D-Day landings is a truly enthralling tale that reminds you of how different the past was, when your morals and a strong handshake were enough to seal someone’s trust.

Don’t Cha Wish Your Scouser Was Boss Like Me - King's Head Theatre, London

After its acclaimed run up north in Manchester’s 53Two theatre, Manchester Actors Platform’s production of their work “Don’t Cha Wish Your Scouser Was Boss Like Me” has gone on the road and transferred to The Kings Head Theatre in Islington, London.

Tom and Bunny Save The World - Greenwich Theatre, London

With ratings for shows such as The Walking Dead declining and having been over a decade now since Shaun of the Dead and its horror comedy kin came out, you would be forgiven for thinking that the zombie genre was in decline.

When a show arrives in the West End with so much hyperbole around it; when you bought the tickets for over a year ago; when the OST has been your constant companion in the car for 18 months, it is difficult not to be apprehensive it will live up to sky high expectations. Don’t worry, Hamilton delivers everything you’d hope for and more.

It has been 40 years since Rocky Horror hit the big screen in 1975 but the film still has a major cult following today - even for fans like myself who weren’t even born when the movie was released, let alone legally able to watch it until well over a decade since its release. Why is it such a successful movie? Maybe it’s because in the day it was seen as slightly forbidden & somewhat bizarre, and invited the audience to give themselves over to absolute pleasure.