We take for granted in our modern age the concept of premieres and how quickly new shows then appear around the world. In the 19th century this was, for obvious technological and logistical reasons, far from the norm. But Iolanthe, Gilbert and Sullivan’s seventh comic operetta in their series of fourteen, was a first in this and so many other aspects.

They rehearsed two companies so that it could open in New York on the same night, it was the first production to premiere at the newly built Savoy theatre and in turn, The Savoy was the first theatre in the world to be powered by electric light. This allowed the production to delve into a whole new world of technical effects, hitherto never attempted.

The status of G&S in the British psyche is as enduring as their catalogue and this piece in particular is a fine example of both. The fact that Iolanthe continually toured with the D’Oyly Carte Opera Company from 1892 to 1981 is a testament to that. And although their works do not have the popular theatre going attraction they may once have had, the operettas still retain a status as national treasures which means that they do not need to rely on the die-hard G&S aficionados to keep this part of our heritage alive AND regularly performed.

Alright, in the current age it might for some be the equivalent of theatrical Marmite and be loved and hated in equal measure. But you simply cannot help to admire the quality and intelligence of the writing which still has the power to entertain and draw the audiences in.

And it is perhaps the subject matter of Iolanthe which provides the greatest historical fascination as it satirically attacks the politics and class system of the 19th century; systems that in many ways remain unaltered. This is of course reinforced by the humour which in a quintessentially British way, gently lambasts and is just as relevant today, as it was when first written some 135 years ago. Not many libretti can claim such enduring qualities.

So, does it still work in this retelling?

Well, in many respects it does and in others it could have achieved more.

The studio setting within a simple black box and with minimal setting did beg the question as to whether it could work without a traditional set. But it worked – and surprisingly, very well – aided in no small measure by a well-executed lighting plot which added texture and enhanced the character of the playing. There was a good use of colours, zoning of the lights to draw attention and focus to the action and effective and well timed cross-fades.

The costumes were very good and interestingly, the Fairy outfits lit exceptionally well and looked stunning. This was enhanced by their character makeup which really added to the visual effect. The ‘specials’ in the guise of the Lord Chancellor and Private Willis were dead right, but what was at odds was the modern dinner suits worn by the Peers, aggravated by the fact that the approach for all the other characters was ‘traditional’ and period wise, correct.

Iolanthe is a parody and with parody, an element of the success lies in the size of the playing and then intelligently, treading a fine line so that character does not become caricature.

The success of the evening (again, in the main) lay with the ladies and in particular the chorus and principal Fairy roles, led expertly and in very detailed fashion by Janice Rendel (Fairy Queen). She placed just enough weight on the humour to keep it real and within the tolerances of what works for G&S, whilst still being true to the piece. She was more than ably supported and in similar standards and style by Liz Betts, (Fleta), Caroline Meek (Celia) and Lesley Stockley-Roberts (Leila). All treated the humour with a light touch and therein lay the success as the direction for them, complimented the piece and the performances; it was traditional but with a nod to a modern twist on the humour. They were all good examples of what woven-in and original ‘business’ can do in freshening up a piece such as this but without altering the intent and the traditions of the genre. Consequently, they engaged the audience so much so that the dated language and references, hit home and were attended to. The ladies chorus in particular never stopped working or suffered a loss of character which is essential with a style of piece which (needs?) to follow a format of standard company groupings. In contrast, the same could not entirely be said for the men, and especially in the early part of act 1. More on that later.

Helen Fieldsend (Phyllis) gave a very traditional and strong portrayal which worked well in the context of this production and similarly, the honest and uncomplicated delivery of Louise Rayner (Iolanthe) was captivating and came over well in act 2, especially in her scene with the Lord Chancellor. 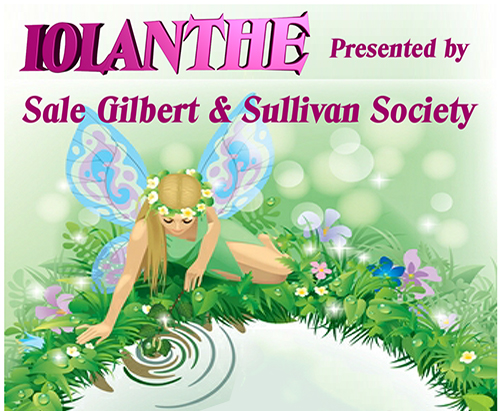 The direction kept the whole piece moving and there were very few occasions apart from the odd pick-ups where it lost impetus. Whilst on that point, there were a few dropped cues and missed lines and sometimes, it gave the impression that a number of the company were not that confident with the lyrics. Musically, the two keyboards and violin worked well and was more than adequate in this venue. But the payback is that it is a very exposed accompaniment and on occasion, the mistakes in the playing meant there was no hiding place!

Moving on, the company sound was, on the whole, well balanced with good tuning. But it just felt a little underpowered at times, especially when considering the reasonable size of the company and the compactness of the venue; simply being aware of the need to project was all that was missing.

The male chorus was a little underwhelming for such a big entrance in act 1. Portraying men of little character and depth takes some doing! On this occasion, their characters did not travel sufficiently to engage the audience as much as they should have. But they later got into their stride and were delivering the size and animation/detail of performance that was necessary.

The male principal performances all gave a good account of themselves, particularly Michael Evans (Strephon) who had just the right amount of animation and engagement to bring such a straight role off the page - and with a very pleasant voice. Indeed, all the male roles were sung well, particularly the resonant tones of Tony Noden (shouldn’t it be spelt Mountararat?) and the light and articulate Stephen Othen (Tolloller). Bobby Greatorex (Lord Chancellor) and Ken Brook (Private Willis) were traditionally portrayed and hit home with the humour provided by the script. But it just felt (only at certain times) that the men, not just the company, just needed a little more depth and character about them. The reason appeared to be that there had been so much attention to detail in directing the women, the men stood out that bit more. And it did appear a directorial issue and not one of simply performance/performers. The Nightmare Song for instance came across as a rendition, an account of the clever patter song lyrics and not a performance of an engaging, fanciful, eccentric aspect of storytelling which would allow the personality of the character to capture the audience attention and take them on his journey. And the addition of the female chorus just didn’t add anything to it.

But minor points as it was all well-conceived and competently delivered and nothing didn’t work or was ‘wrong’ per se. It just needed a greater consistency in that Gilbert-esque, Bab Ballads character, flamboyance, eccentricity and the detail to support it. And to temper that, the male company really became far more animated and characterful in act 2. So, perhaps part of the mix was it simply being opening night?

The story of Gilbert and Sullivan, their collaborations and their relationship is absolutely fascinating and every work is a back-catalogue of facts and trivia. To adapt an old adage, if you see the show, make sure you read the book and watch the film!

On all counts, you won’t be disappointed, but particularly with the former.

It plays until the 25th May.