Into The Woods - Bolton Little Theatre

Into The Woods is a musical by Stephen Sondheim which made its Broadway debut in 1987. Since then it has been performed by both professional and amateur theatre and was made into a critically acclaimed film in 2014, starring Meryl Streep, Emily Blunt and many other well-known Hollywood A-listers. This performance is the 2016 production of Horwich Amateur Theatre Society, directed by Jason Crompton, who has some ninety productions under his belt both as an actor and a director.

The story focusses on a baker (Paul Kerrigan) and his wife (Vicky Armstrong) who are desperate for a child. They learn from their neighbour, a witch (Natalie Crompton), that she placed a curse on the baker’s home many years ago when she discovered the baker’s father had stolen some magic beans from her garden. The punishment for this was that no child would ever be born into the home again. The witch (Crompton) tells the desperate couple that she will remove the curse if they can bring her four important items, a white cow, a red cloak, hair as yellow as corn and a slipper as pure as gold. Cue the classic fairytale characters of Jack (Matthew Gavin), Little Red Riding Hood (Jenny Roberts), Rapunzel (Millie Kenworthy) and Cinderella (Rebecca Lake) who all encounter the baker in his journey through the woods, on his mission to make his dream of becoming a father come true. 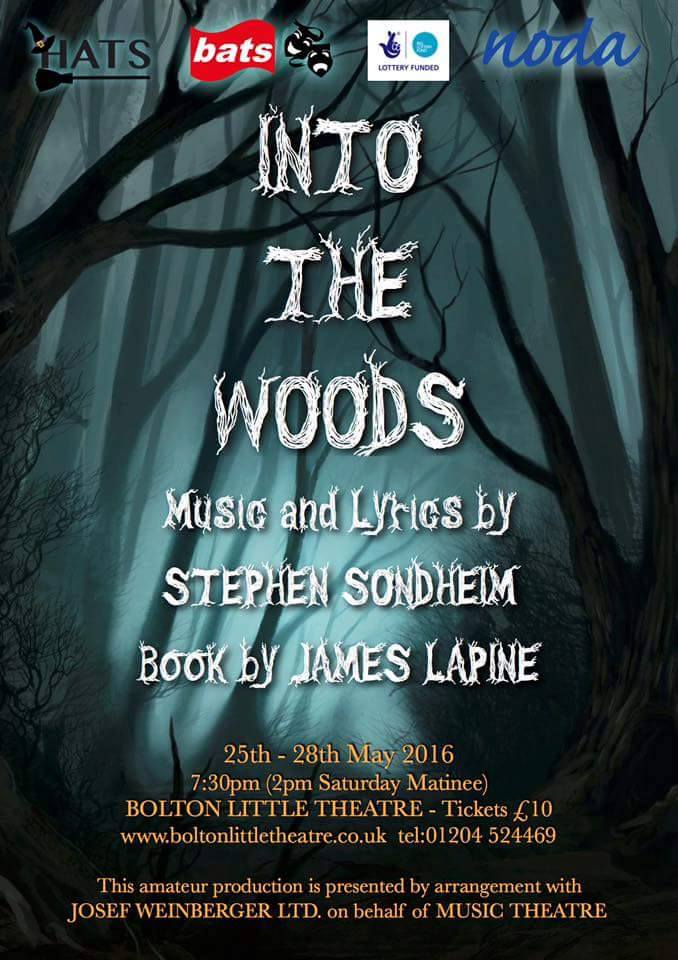 The first Act was acted brilliantly with some stunning vocals, especially from Jenny Roberts and Matthew Gavin. Both played childlike characters so believably that I was shocked at how powerful their voices actually were when they sang solo. I loved Jamie Fletcher and Joel Cheetham who played the part of the princes to Rapunzel (Kenworthy) and Cinderella (Lake) who were most definitely the comedy characters of the evening and really made the first Act seem light hearted and fun. The only thing that spoiled the first Act for me was the sounding. The music (directed by Paul Stanley) was beautiful but sometimes it was much louder than the voices of the actors and this made it difficult to hear. Although it did not really disturb the flow of the story, there were a few occasions where I could not hear properly and felt that I had to catch up to understand what was happening.

Act two took the story on to a much darker path. It showed the audience that all wishes and desires come at a price and that although there was a happy ending for some, that was not the case for everyone and the mixture of fairytale ending and sadness was quite refreshing. Most stories have one ending or the other and I feel that Into The Woods is a good reflection on reality. Thankfully, following the interval, the music and sounding seemed to have been addressed making the second part of the show much more enjoyable.

A huge well done to all of the cast. It was a bit of a family affair with the narrator being ten year old Adam Crompton, the son of director Jason, and Natalie, who played the Witch. They both should be bursting with pride. As the only child in the show, Adam showed his maturity and talent and I hope that he takes his acting to the next level because he shone like the star he is tonight and he truly deserved the loudest applause of the evening. Horwich Amateur Theatre Society have produced an excellent musical and the hard work and commitment was evident from every single member of the team. Bolton Little Theatre seats around two hundred and fifty people. I have never seen a full house on the opening night of an amateur production before and I think the fact that it was a full house is testament to the talent on stage. Well done to all involved and I look forward to the next one.