Everybody knows the story of Ghost (and if you don't, where have you been?!) which gave Patrick Swayze one of the two best known roles of his career.   It's the bittersweet story of Sam and Molly who are parted too soon but reunited briefly via a psychic medium, Oda Mae Brown. It also has the satisfaction factor in that the bad people get what's coming to them.

I saw Ghost in Manchester a few years ago on its first outing, prior to the West End.   It wouldn't have been my first choice of a film transfer to a musical but it was entertaining. The MYT production tonight carried itself just as well as the professional production, with stunningly imaginative visual effects and very strong performances from the lead characters.

The show opens with Sam (Chris Wagstaff) and Molly (Hannah Lawson) singing "Here Right Now". There is very good chemistry between the two of them and they are totally convincing as a couple and they also have amazing voices.   The scene develops into a love scene which is sensitively done with the sofa being wheeled off stage as things start to become a little hot and steamy...!

The enthusiastic ensemble take part in the next song, supporting Carl (Sam Cain) singing "More".   The projection of the New York hustle and bustle throughout the song is visually stunning and really brought the song to life, as did Sam Cain's voice which is extremely strong and compelling.   His transition later in the show from supportive friend to sinister accomplice is quite chilling.

Sam's death scene is extremely moving and I did have some tears in my eyes...it is very well done indeed.

Chris Wagstaff expertly portrays the denial, anger and heart wrenching sadness of Sam. He captures every aspect of Sam's anguish and when Molly gives his shirt to Carl, it is really sad to see him standing there, absorbing what this means.   We really feel his pain and grief and his desperation to get his message through to Molly...which leads me very neatly to Oda Mae Brown, played so brilliantly by Emily Jones.   She stole the show with her earthy performance and excellent comic timing. Whoopi Goldberg is a hard act to follow but she did her proud tonight, delivering the killer lines with considerable ease and aplomb. The scene where she is first possessed by a ghost is hilarious and she plays it perfectly.

The lighting throughout this production is flawless and used to great effect.   I particularly liked the effect of the subway train which seemed simple but could actually have you believe you were in a subway, watching a train speed past.

The door illusion was executed brilliantly...I still don't know how it was done and I'm glad as I'd like to keep the illusion!

This show has romance, murder, anger, revenge and also comedy - one of the biggest laughs going to the nun who expletes when Oda Mae Brown very reluctantly makes her charitable donation...

There was imaginative use of the auditorium, with cast members descending the stairs from the back - and in Sam's case, ascending at the end.

There were a few sound gremlins due to occasional microphone crackles but nothing serious and the cast were consummate professionals throughout.   An observation I would make is that at times, the band are a little too loud during speaking parts and it was a strain to hear what was being said but I'm sure that can be easily rectified.

Special mention should go to the following:   Lorna Shakespeare-Smyth who plays a Hospital Ghost and also Mrs Santiago. She is extremely funny and also a very talented singer; David Beeby as the Subway Ghost who played it as a white hot ball of anger and rage at his untimely demise; Caroline Blair and Joshua Kime as Clara and Louis, Oda Mae Brown's assistants who play it for all their comic worth and finally, Rhys Nuttall who executed a stunning back flip during "I'm outta here". Breathtaking!

Ghost will not be here forever, so get down to Sale Waterside and start believing. 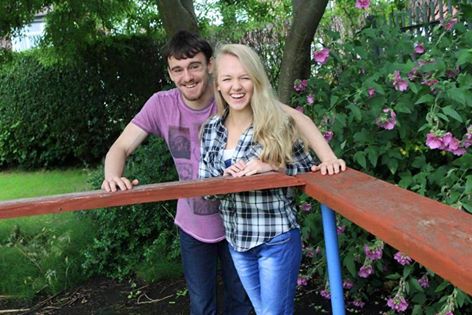