Reach For The Stars: The Nicholson Academy Of Performing Arts - RNCM, Manchester

Based in Droylsden, this was The Nicholson Academy Of Performing Arts' end of year showcase on the main theatre stage at The RNCM. With approx 140 performers, some as young as 2 years old and one of the adult dancers in her 70s, this must quite simply have been one logistical nightmare, as over the course of the show we were given 30 different 'numbers', from all styles of dance from Classical Ballet to modern Hop-Hop and each one costumed brilliantly.

The dances were actually of a very high quality and were all most sensibly and imaginatively choreographed. I loved the use of space and the pictures created, especially for the ends of each piece. The choreographers had made certain that whatever they were asking their charges to do was within the bounds of their abilities and using them to their best advantages. Of course there will always be in situations such as this individuals who will shine brighter and display more talent and ability than others, but this is a private academy where all are welcomed and it is fully-inclusive, which seemed here to work to your advantage as a couple of times I saw the more advanced students helping others.

Sadly the programme does not credit solo dancers, nor does it tell me which group performed which piece, nor what particular style that piece was in, nor the ages of the participants in that particular piece, not even the choreographer for each particular piece and so I am left now with being able only to make generalisations and no specific credits. - Perhaps an idea to think a bout for future presentations would be to have a Compere / MC. Someone to introduce each section and smooth the transitions between them. This was the biggest downfall of the showcase - long pauses and talking backstage between each set. Also the lights came to blackout too soon at the end of every piece. Holding the lights there for just a couple of seconds more would have made all the difference. 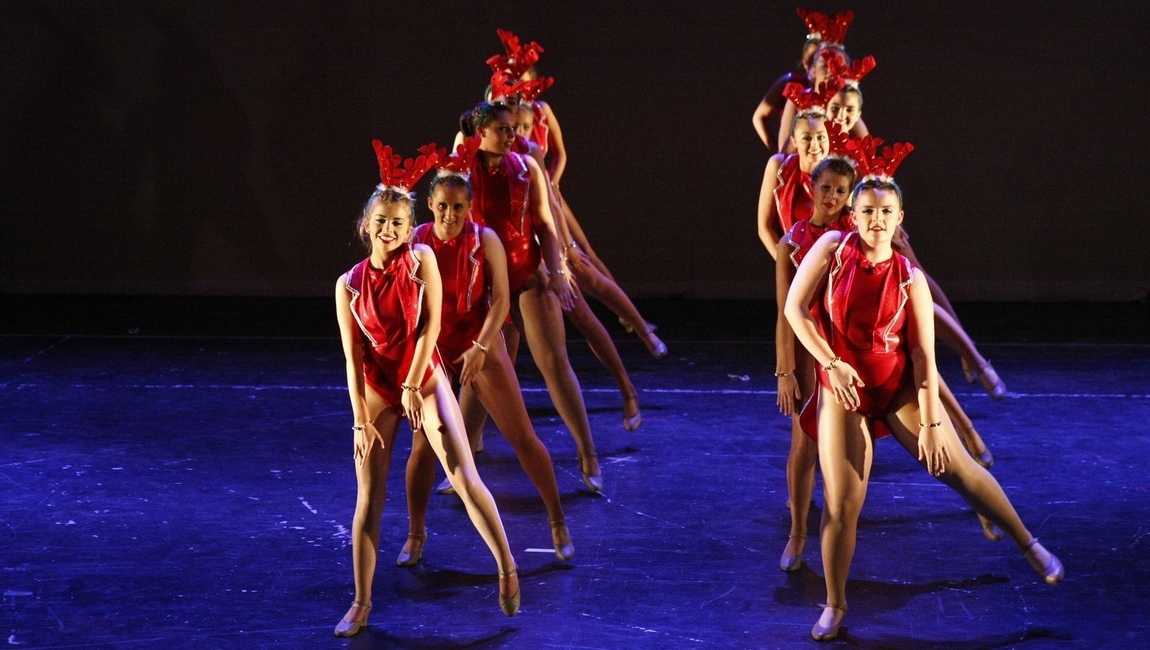 I will not mention all 30 pieces - I would be here forever - but here are the ones which impressed me the most.

In the first half my favourites were the opening number Dancing Fool, Juicy, Viva La Fiesta, The Can-Can, and the very modern up-beat finale to the first half which saw at least three different groups combine in a number called The Nicholson Academy Crew.

In the second half The Sleeping Beauty was really quite beautifully done; the adults made a really nice job of Nowadays; and the Lion King finale was very good indeed, especially I Just Can't Wait To Be King. With my favourite piece from the whole show being the number which started this sequence, They Live In You.

There were also a couple of acting / singing numbers in the showcase which were most unfortunately the weakest links. This was down to, more than anything, technical issues with mics. Such a pity but I could not hear most of the dialogue and when I did it was over-amplified and gave feedback. The acting pieces were done by some of the younger students too and so I felt awfully sorry for them. Absolutely not their fault.

The whole thing was, despite this, a huge success, and a massive well done to all the performers who have put so much of their time, dedication, passion and indeed talent in to making this a worthy showcase of a dancing school that, until a few days ago, I had never heard of. However, I shall be looking out for them in the future. Droylsden's got talent!!

However. There was one other thing which I actually do find the need to mention here. It is not the students, it is not the staff, nor is it the RNCM, but in fact, the audience. This year alone I have seen almost 170 productions, and yet, this afternoon's audience was possibly the most disrespectful and annoying audience I have ever encountered. Not only were many of the parents photographing and videoing the show (despite constant reminders not to and staff coming into the auditorium during the show to tell them) it still continued throughout; but there was a lot of talking during the set pieces, sweet wrappers being unwrapped, using the torches on their phones, continually walking in and out disturbing everyone, and even one lady in front of me waving her arms frantically towards the stage every time her child appeared!! Further, there were a few babies and toddlers in the audience too which cried and made noises. I also find this unfair. Even for a show such as this, if you cannot leave your baby with a babysitter or relative, then don't bring them to the theatre, please!