Arriving at The Studio, Widnes I was almost refused admittance by the bouncer on the door but pulling rank with 'Do you Know Who I Am?' I had these four bouncers trembling! In a nice touch prior to the start of the play the four mingle with the audience with a nod here and there and 'I'm watching you' glares and the odd search of the handbags. Luckily no one was ejected from this small but enthusiastic audience tonight.

The play written by John Godber in 1977 is as topical now as it was then with four young girls planning a Friday night out and similarly four 'hope to get lucky' lads and observations being made by the bouncers. A few other characters including a typical cheesy DJ, hairdressers and suspect movie stars. What makes this play remarkable is that the four bouncers perform as all the characters in full black attire and what should be absurd to see four grown men acting as giggling girls works extremely well. I would have liked to have seen the bouncers dressed a little more smartly for their roles as they looked more like lads on a night out than their position. 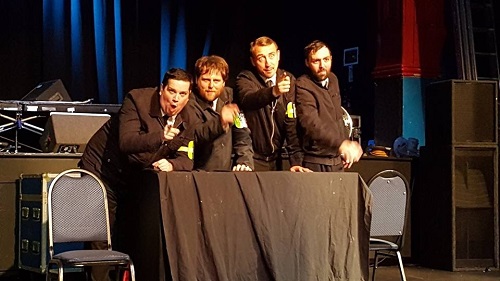 Tonight's performers represent the Real Thing Theatre Company a recently formed group based in Halton and Bouncers is their debut show. If first night nerves were a problem they were certainly not in evidence as each took up their positions in typical bouncer stance in front of the audience. To see them transform into the excited girls at the hairdressers planning Rosie's birthday night out and using little props throughout other than the odd wig, handbag and can of lager is brilliantly portrayed.

Switching swiftly back to bouncers and then to the barbers with the lads discussing their plans for a night out on the razzle, the script is littered with old jokes and crude comments but is extremely amusing.

Rosie (Michael Pirks), Maureen (Mike Ridd), Elaine (Simon Choat) and Sexy Susie (Danny Shaw) arrive at the club and the audience are entertained to a very funny routine of dancing around the handbags. Pirks and Shaw in particular giving hilarious performances. Later we are treated to the heartbreak of a new romance ending with tears and condolences' given by the others which again is hilarious, capturing mannerisms and sayings of the Scouse girls perfectly. Even the hapless Elaine (Choat) gets an unfortunate dance partner whilst Sexy Susie makes out.

Returning to the lads, the comedy continues with the lads leering and making comments to and about the audience (we became club members) which were all taken in good humour. Scenes follow from reading graffiti off the loo walls to downing pints and exploiting typical laddish behaviour. 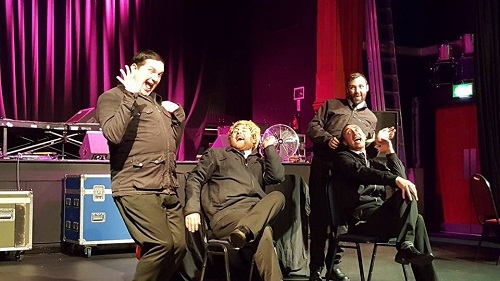 To the theme from ' The Good, The Bad and The Ugly' the four become bouncers again, (I’ll leave you to decide who is who and who was omitted!) Staring intimidatingly at the audience you almost feel guilty for some misdemeanour. Audience reaction to this was brilliant as they moved onto the first of four speeches given by Lucky Eric (Ridd). These are a sharp contrast to the humour of the rest of the play with their content and delivered with passion as he philosophises upon life. During the play there are several heated moments between bouncers Judd and Lucky Eric, calmed down by Les and Ralph.

The showing of a' bluey' film acted out by Ridd and Shaw brought the house down, it was the highlight of the evening and such was the laughter from the audience some of the dialogue was lost but the visual was enough especially with the 'film reel' jamming and the performance 'rewinding'.

The whole play with binge drinking, casual sex and violence hardly sounds a comedy and was demanding of the actors who worked well together as a team who all gave good portrayals of the various characters throughout with good comedic timing. The lighting was ok but better use could have been given to enhance the different scene changes, at times a little slow with keeping up with the changes. When the play ended there was some confusion as to whether it actually had as the four took up the same Bouncer stance as they had throughout, maybe a change to be made there?

Yes it was amateur and slapstick and in need of a little tidying up here and there, but overall for a first ever performance the cast coped well with this production which was directed by Louise Rayner. It was an enjoyable night out and the audience interaction made it more so. I look forward to seeing future productions from the company.

This reviewer would like it to be known she was in no way influenced in her review by the blatant fixed winning of the Jelly Babies in the raffle....... next time make it chocolate!!!