This was my first visit to The Theatre Royal. Indeed it was even the first time I had ever put foot on St. Helens' ground. In fact if it hadn't have been for the wonderful kindness of fellow reviewer Lorna Weekes taking me by car I wouldn't have got their at all. So why, I hear you ask, did I go to all this trouble for 'just another dancing school showcase'?! Precisely because this was not just any dancing school, this was the end of year showcase from Danceworks Ballet And Theatre School, Eccles.

I first came across students from this private academy last Christmastime when they were dancers in a pantomime at The Dancehouse Theatre in Manchester. I praised them then, and have subsequently seen students from this school popping up in various places and performances ever since and have always had praise and respect for their abilities and discipline. I was therefore more than keen to experience the entire school to see what they really could do when left to their own devises, and let me tell you, I was absolutely not disappointed. They delivered over and above my expectations! (Which were already very high!).

With over 200 participants in the event, most of them children and youths from aged 3 upwards, this was one logistical nightmare which I would not have wanted! The organisation of this was very smooth, and although it must surely have been total chaos backstage, no-one had the slightest inkling of this from where I was sitting. I was made aware however, that many of the younger dancers were seated in the gallery and disturbed patrons there when they were shunted in and out. I would also suggest that the show was somewhat overlong. When the evening performance started at 6:30pm and wasn't over until 9:45pm, this is a very long time for some of the youngest to keep controlled and disciplined. And for an audience, two intervals extends the evening and makes it all feel longer and consequently, you are starting to feel tired and restless in the third act. [Mind you, it is the first theatre I have ever been to where they have been selling alcoholic ice-cream - so maybe that is what keeps people going!]

So, with over 2 and a half hours worth of items - not just dancing, but singing and acting too - I couldn't possibly write about them all. That would be an impossible task! I shall simply write a few words about those items in the programme which for me were stand-out numbers {in an evening full of stand-out numbers!}. I am in no way qualified to criticise the technical aspects of the dancing - I hung up my jazz shoes long ago - but I am a Musical theatre trained actor and am still active in the profession and so I guess I do tend to lean towards items from the Musical Theatre repertoire; however, I shall try to be as unbiased as possible and comment on those items which for me, contained that 'wow factor'. This is difficult of course for two reasons. One, all the items in the programme contained it!, and two, this is not a professional training academy. Danceworks take pupils who want to act, sing and dance as a hobby and for fun as well as pushing and training further those who would like to enter the profession or go on to further training. The one thing I would say here is that it was completely impossible for me to distinguish between the two. All were highly professional and displayed enormous talent and dedication to their chosen craft. However, in the order they appeared, here goes...... 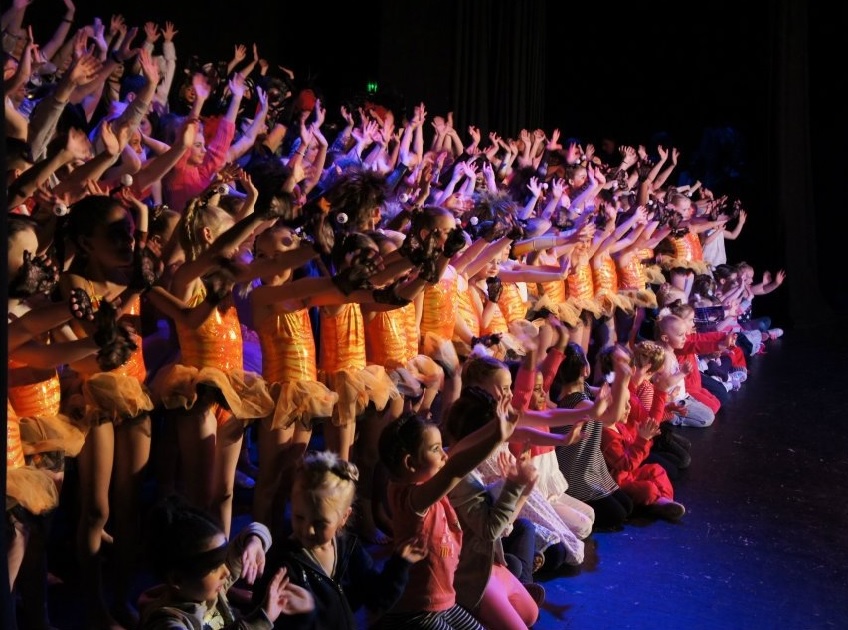 The opening Starlight Express sequence was brilliant. I loved the use of acrobatics and balancing here, and appreciated the roller skates. A brilliant and effective start.

When watching the dance routines I look for effective use of the space; interesting groupings; great pictures, especially endings; and to see if the choreography is both exciting and within the dancers' capabilities. This opening dance ticked all the boxes. Great.

The next one to impress was the section from La Corsaire. The whole idea behind dancing traditional ballet is that is should look both elegant and effortless. This was both and excellently danced. I am not really a huge fan of Classical Ballet, but I appreciate the craftsmanship and understand that even if dancers don't ever perform as ballet dancers, the techniques learnt stand them in excellent stead for many other dance forms. One of these is obviously Contemporary Ballet / Dance, which leads me very nicely on to my next highlight, Furious Angel. Danced by the older girls, the timing was wonderful. Absolutely together when they should have been together and the pictures created were lovely. I especially liked the feather-plucking at the end. Very effective.

The last piece in the first act which grabbed my attention was a solo contemporary dance by Alex Hetherington called Over You. If I had been asked this time a couple of years ago if I liked and appreciated contemporary ballet, I would more than probably have answered that I didn't really know what it was except perhaps I was aware of Ballet Rambert and not much else, and would have undoubtedly have said that it wasn't my thing. However, over the course of my reviewing, I have seen many contemporary dances / ballets and I am now becoming more and more interested in this dance-form and beginning to appreciate the artistry and skill of the dancers so much more.

Note; I don't know the difference between the terms Contemporary Ballet and Contemporary Dance. They might even for all I know be interchangeable. My only rationale for using either term would be that with Ballet there is a story to tell. The dance needs to have a narrative or through-line which has a gradual progression from start to conclusion. Dance would be more abstract and internalised. It may not be so clear to the audience what the dance represents but the ideas and images it does represent can be more abstract. This is only my own personal thinking which of course could be completely wrong. Maybe someone who is in the know can comment below.

The first piece after the first interval was very interesting. Was this Contemporary Ballet since it told a very clear story? It was an extremely brave story to tell too. Was this piece self-devised I wonder? The programme credits individual dancers for this piece and so I shall do the same. It was very touching and even perhaps quite unique. I certainly have never seen the story of the mother of a family having cancer danced before. Those responsible for this were Jolie Crompton, Jasmine Payne, Evan Reah, Izzy Cross, Lola Gray, Mia McFarland, Yasmin Mitchell, Sophie Searle, and Nicole Mitchell.

Freya Kelly was the next to impress. Dressed in a white satin dress she sang a solo called Nights In White Satin! A lovely voice and well interpreted. All I would say is that some more tuition on knowing how to use a mic would have been preferable. Take the mic away from the mouth when singing louder and going for the belt voice in the top register.

Then came four young girls to dance a piece of Classical ballet which was truly excellent. Called La Pavilion D'Armide it was one of the dances that Danceworks entered into The Dance World Cup Competition in Jersey earlier this year, and this dance won the Bronze Medal; in other words being placed the third best dance in this category in the world! Quite an achievement, but it was well deserved. The dancers were Yasmin Mitchell, Nicole Mitchell, Aleksandra Duda and Sophie Searle.

Immediately following this was another solo contemporary piece called Listen, this time danced expertly with exciting choreography by Jessica Langshaw.

After the second interval and we came back to be treated to yet another beautifully choreographed piece of ballet; La Esmeralda. Very graceful and elegant.

And now something which I have never seen any dancing / theatre school showcase before. This is something I would classify under the banner 'Circus Skills' and the two young girls who put their trust in the two strong boys standing on a plank on a single tube was either utter madness or total insanity I'm not sure which; but either way they managed to perform some difficult and breath-taking balancing acts which was both very unusual for a school to offer such tuition and brilliantly showcased! The two 'strong men' were Joe Taylor and Joe Gallogly, and the two young acrobats were Nicole Mitchell and Amelia Cramant.

The whole event finished with something which again, I knew nothing about. I mentioned earlier that ballet needed to tell a story. This was a story I had never seen before, and was quite fantastical and seemed to me like it belonged more in a comic book than on the stage. Called simply Spirited Away, this didn't give me any clue either as to what I was witnessing. Danced by The Competition Team, it was visually stunning and very entertaining but it was only after looking up the title on the internet did I understand what the dance was all about! [It is a Japanese Anime Fantasy film, and broke all Japanese box office records!]

Of course these are only a selection of all the items showcased. There were a couple of acted scenes, some more songs and of course many more dances - but I couldn't credit all of them! However, there are just one or two general comments I should like to make about the overall presentation.

The costuming of all the items was absolutely fabulous. Different costumes for every number and all worked perfectly. Very impressive. The lighting design was mostly very good. Some lovely effects were created in many of the routines. However the star curtain was overused, and the strobe effect only created the desired effect on one occasion. - The red lit sequence in the Spirited Away. Other times it didn't work sadly. The smoke was used well, and at the right moments, but every time we were given too much. The smoke totally engulfed the performers rather than enshrouding them in a light mist, and was around for too long. Dry ice would have worked better for some of these times. I really liked the pyrotechnical ending to the Starlight Express sequence. Perhaps some other firework at the end of the Spirited Away or for the curtain calls might have been better than simply repeating the effect during one of the staff's speeches. As I have already intimated, the microphone levels were generally too high. The sound was at times ear-piercingly loud. I think perhaps sometimes it can be forgotten that despite the music being normally played in a nightclub, we are now in a theatre.

Finally my only other criticism is that some of the sequences went on too long. The old adage of ‘less is more' applies here very nicely. Some of the Musical Theatre items in this evening's showcase could have been shortened and would have benefited from so doing.

Of course these are all only personal opinions and suggestions. Over all, the showcase was absolutely wonderful, and the amount of talent undeniable. Presided over by Genene Bowers, this school has now outgrown its current premises and in September will be moving to a new building on Chadwick Street in Eccles. This school is certainly going from strength to strength and if you are local to Eccles and are interested then why not pop along on the 3rd September for their Open Day.