RENT is an award winning rock musical written wholly by Jonathan Larson who sadly did not live to see the opening on off-Broadway in 1996. It has won numerous awards and adapted into a musical film in 2005. Twenty years later The York Orchard Theatre Company is performing RENT as an amateur production.

RENT, in similar vein to Puccini’s La Bohème and which the story is based on, explores a group of ambitious artists in poverty who are struggling to survive in New York City’s Bohemian East Village. It primarily focuses on the daily hardships of two roommates, Mark and Roger.

Mark (Sam Lightfoot-Loftus), the key narrator, chronically films, records and captures lives of those around him.   Josh (Roger Eldridge-Smith), however, struggles to take things in his stride and this eventually has an impact on the relationship between him and Mimi (Beth Stevens). They and their friends honestly share their life journeys of love, hope (as in Santa Fe), disappointment and loss. 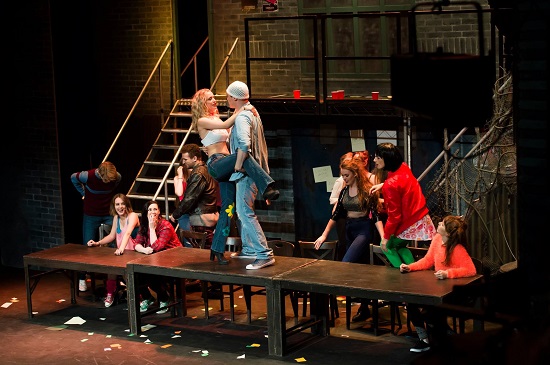 All performed with varied musical dialogues with voice mail interludes from concerned loved ones. Crucial numbers are sung harmoniously that confirm their struggles ranging from Tune Up, Rent, Christmas Bells and Take Me. There are reprisals of the some songs and some catchy numbers which engage and evoke the audience, with Tango Maureen and Over The Moon.   There are Mimi’s emotive Light My Candle and the convincing Today For You and the determining I’ll Cover You which demonstrates the desperate times.

With Rachel Dennison’s strong choreography, the cast performs excellently throughout particularly in the collective musical numbers such as in the honest Santa Fe, their shrewd identify in La Vie Bohème and their summative Seasons of Love where they evaluate how much has happened in 525,600 minutes. This is all under the direction of both Justine Hughes and, musically, Ryan Durkan, with clever staging that captures life in and out of Mark and Roger’s industrial like abode.

Shown in Act Two’s finale, there is a creative use of visuals on a hung canvas, which captures the life, filmed by Mark over the past year (or 525, 600 minutes) which impressively contemplates the journeys of each individual. There is great use of lighting and spotlights, courtesy of Magnus Leslie, throughout the performance and the bright costumes reflecting the Bohemian lifestyle in the East Village.

The York Orchard Theatre Company consists of highly talented young performers and creators and they should be proud of their latest production. Following the success of Phantom of the Opera and Little Shop of Horrors this year, the company sadly announces that this production to be their last one. They however will finish RENT on a high and their production will certainly be remembered for a long time to come.

RENT reminds one of the stark realities today where many, particularly artists and young professionals, across the world, are struggling to make ends meet as well as optimistically pursuing their dreams. Many won’t give up and will continue fighting for their dreams to come true just like Mark, Roger and their group of friends.