York Stage Musicals present their latest production, 9 to 5: The Musical, at York’s Grand Opera House. It is a musical comedy based on the 1980 film of the same name. The book is written by Patricia Resnick and the music and lyrics by Dolly Parton. The story goes back to the 1970s when Violet (Julie Anne Smith), Doralee (Alicia Roberts) and Judy (Jo Theaker), three office workers, have had enough of Hart (Darren Roberts), their sexist boss, and are determined to do something about it. This is all set to Parton’s award nominated hits and musically directed by Sam Johnson.

Catchy 9 to 5 opens the show and Parton visually appears “live” during the musical number when she introduces the three women. It is set at a time where sexism and sexual harassment were commonplace and particularly in the workplace.

Hart, the company’s boss, is introduced with the crude Here For You which contains sexual innuendoes and his general attitude towards women. I Just Might and Doralee’s Backwoods Barbie analyses how bad things are and more so with the nasty gossip relating to Hart’s perverted attitude. 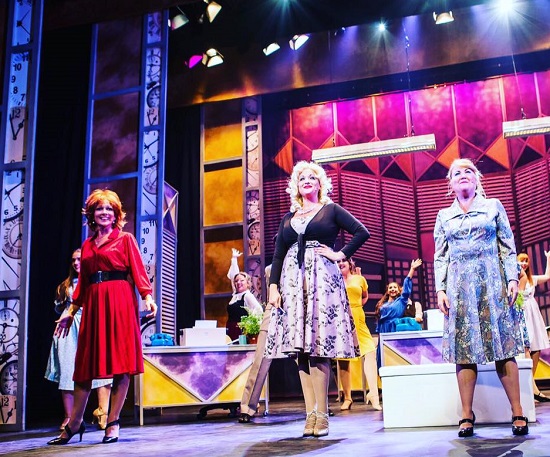 Violet, Doralee and Judy plan their revenge and prove to all that Hart is a “sexist, egotistical, lying, hypocritical bigot”. Their plans are creatively executed on stage with Judy’s slick cabaret style Dance O’Death; Doralee’s country and barn dance Cowgirl’s Revenge (One thinks of Dolly Parton); and Fairy tale themed Violet’s Potion Notion. Those three musical numbers are executed well and combined with the ensemble’s singing and dancing, choreographed by AJ Powell. A festive rendition of Joy to the Girls celebrates womanhood and liberty and Shine Like the Sun evaluates the unexpected events concerning Hart.

Act 2 sees Violet what it is like to be One of the Boys and the three women’s determination to give their office a makeover dream in Change It. After exposing Hart in hilarious and outrageous circumstances it ends in a sing and clap along Finale: 9 to 5 with Parton again appearing “live” and all ends well for the brave three women who against odds have changed the women’s role in the workplace and beyond.

9 to 5: The Musical is entertaining but crucially thought provoking. In comparison to the 1970s the society has progressed with time where there are more career opportunities for women; increasing rights in the work place; and policies ensuring equal opportunities are available for all. There are also mechanisms in place should discrimination and sexual harassment arise. Still issues remain however; it has been reported recently on the news that women are still earning less than men doing the same job and discussions of salaries among colleagues are still considered taboo today.   Violet, Doralee and Judy have believed that “success is out there for the taking” and many women across the world are achieving more now than what previous generations would have dreamt about.

This is certainly a feel good musical with Parton’s catchy tunes, which leaves one with a lot of food for thought. York Stages Musicals, under the direction of Nik Briggs, has put together an excellent production and performed by a talented cast and creative crew with its great staging reflecting the story’s era.