They say that 'train'ing is key to success but that isn't always the case. Mossley AODS' show tonight, at the George Lawton Hall, is just that - a success. They also say that the best actors are those who engage with the audience and act even before walking on stage. This bunch clearly are as each member seen by the audience before the show created director Michael Jones-McCaw's cleverly desired effect of us being in a real train station.

Edith Nesbit's family classic, adapted for the stage by Mike Kenny, The Railway Children is a poignant story following the adventures of the Waterbury Children - Bobbie (Roberta), Peter and Phyllis - who are forced to move, with their mother (Sarah Thewlis, who portrayed the same brilliantly British persona to that of her Anna in The King and I with Ashton earlier in the year), from a luxurious Edwardian villa in the London suburb to 'Three Chimneys' near the Yorkshire-Lancashire Railway. Their father (played stylishly with ease by Gary Jones-McCaw), who works for the foreign office, stays in London but the children are not aware of the reason why, despite cryptic clues in the first half. 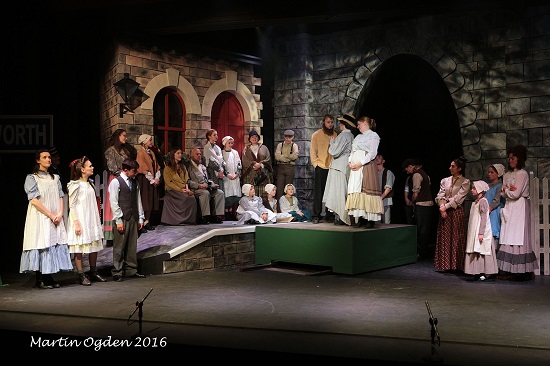 After the pre-show walking of characters through the auditorium to ease the audience into the environment, during which there are only three (different) children on the stage which displays a station platform and mouth of a railway tunnel, along with the contents of a house (and other well-concealed props), we meet the family and are introduced to the story in the form of narrative looks back by the children to the time when they were, as the final line of the show and title suggests 'The Railway Children'.

Every element of the show, including accents and the evident dynamics between 'pride' and distress, is authentic and real with other aspects demanding your imagination, even before we are told to use it later in the script - building in the inclusiveness of the audience being drawn in - how can you not be? This enhances the fact that "things do happen in real life that happen in books".

After relocating, the children spend their days watching the trains and waving to the 'Old Gentleman' (Brian Ganderton, who also doubles as the family butler in the opening scene) on the 9.15am train, who features helpfully throughout the plot. They also show their heroic sides by rescuing a Russian dissident (also played brilliantly by Gary Jones-McCaw) and helping him find his family, as well as nursing Jim (the well-played cameo of Tom Kehoe) who we discover is the grandson of the Old Gentleman, and gathering gifts from around the town for the birthday of poor yet proud 'Perks' (Ben Drane, whose on-stage wife is played equally well by Sophie Howard) - the Yorkshire rail guard who cycles and develops compassion towards the children and family who he is the first contact for when they arrive at the station ("and that darling little place were called Oakworth"). 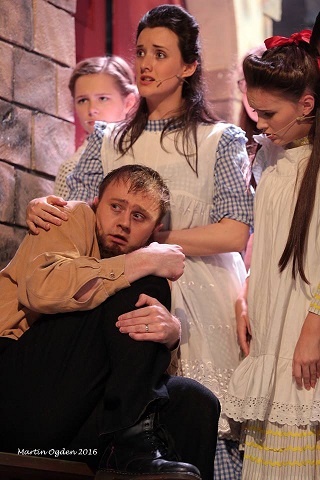 This is before finding the home of Mrs Viney (Georgia Richardson) - and, the first of a few rather touching parts, the breaktaking end of the first act, preventing a 'train' from disaster by alerting those on-board to the (well-executed) landslide! This was quite rightly met with well-deserved stunned applause and it is then clear that one of the morals is "there is always hope". You are really made to feel like part of the action.

The amazing cast of incredibly talented performers, all of varying experience, made the piece just stunning to watch. Mentioning cast, the three children (Katherine Farrow, Zach Atkinson and Kira Richardson) did themselves extremely proud and should be so as they reflected such maturity whilst looking back over their life. From my knowledge, Katherine is a triple-threat often in musicals, Zach played Michael in Billy Elliot in the West End, Stephanie Morris who played Cook has been in Coronation Street and many others have excelled in their trainings and hobby.

The set is stunning, with elements having dual functions, and the lighting, music and transitions were very clever in creating ambience and building up emotive parts - although the more modern One Republic 'Secrets' would not have suited the wartime period, the lovely instrumental version did provide the intended inspirational and exhilarating vibes.

The end of the show topped a truly brilliant night and the reunions of Mr Szezcpansky, the Russian dissident, with his family and the other at the end were just perfectly executed and justified my leading clap-starting (a few people did stand but surprisingly there wasn't a full ovation). 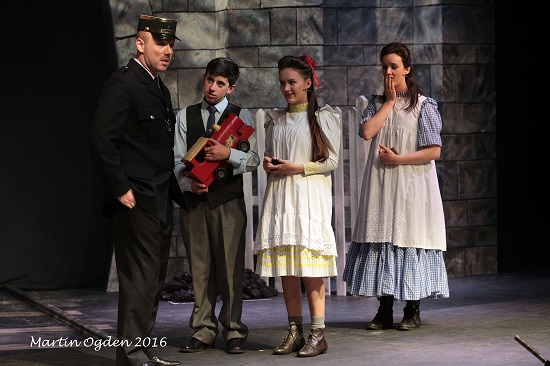 There was so much effort put in to detail and timing to make this what was a pleasure to witness, even the lovely set and curtain call positioning at the end that suggested a nod of appreciation to the unsung heroes behind the scenes and all involved. In another dual role, the wonderful director showed his multi-discipline and versatility as he played both the Doctor and Superintendent - whose speech drew laughs from the audience.

Despite a few obvious (to me) ad libs, that if intended would have been enhanced had they been consistent with each other, it is no wonder this play won the Olivier Award for Best Entertainment back in 2011. With this cast and team, I see no reason why awards cannot be won for this presentation.