Composer and lyricist Stephen Sondheim is very difficult to 'get in to'; he doesn't make it easy for either the listener or the singer; but if it's right it is extremely rewarding and a total joy. Sweeney Todd is one of the more difficult Sondheim scores, and therefore potentially one of the most rewarding too; and has become, since the recent film, one of his better known Musicals too.

It tells the gruesome and dark story of Benjamin Barker, a barber who was transported for life simply because he opposed a local Judge deciding to have his wicked way with his beautiful young wife, Lucy. Unbeknownst to Barker, Lucy falls pregnant and the child, christened Joanna is brought up by the Judge as his ward. 15 years pass since Benjamin Barker set foot in London but now arrives back with his First Mate, Anthony, and as he revisits the barber's shop he used to own, a plot hatches to wreak revenge on the Judge, and so under the assumed name of Sweeney Todd, enlists the help of Pie Shop owner, Mrs. Lovett, (or is it she who enlists him to give her business a boost....) and the rest, as they say, is history!

Altrincham Garrick brought this bloodthirsty legend to life assembling a 'dream team' of Paul Kerryson and Mark Goggins. Former Artistic Director of Altrincham's Garrick, Kerryson made a welcome return to direct what he does best, Musicals. Whilst Mark Goggins' strict and firm baton waving ensured that musically everything was completely sound. 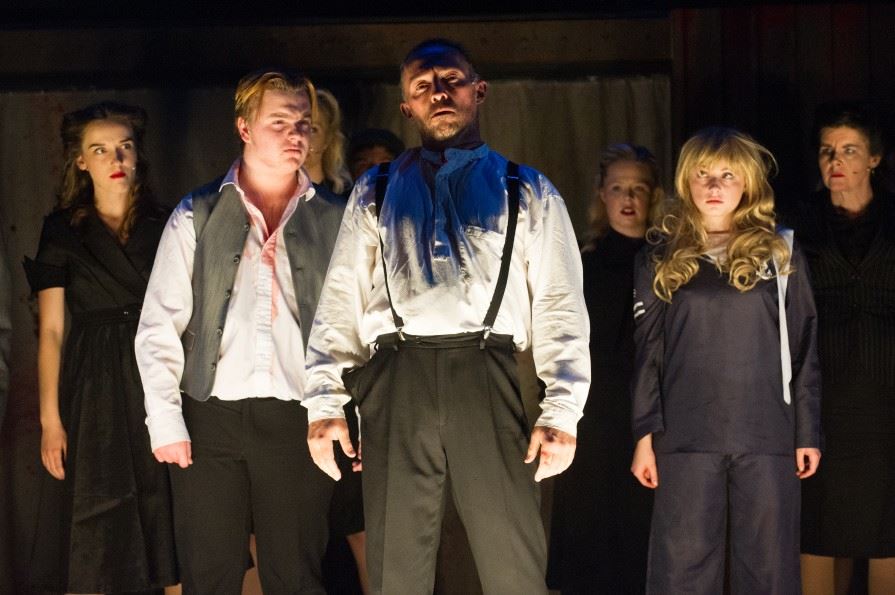 Wayne Holt gave a very dour and unsmiling interpretation of Todd, even in the lighter scenes (A Little Priest / By The Sea) he was still very broody and 'dangerous'. Not the conventional interpretation, but it certainly worked for him and his deep baritone voice and strong stance worked very much in his favour. Mrs. Lovett (Laura Chandler) and Beggar Woman (Charlie Welsh) were both excellent too, but both were sadly too young for these roles in comparison with Todd. Chris Wagstaff gave a plaintive and stolid performance as love-sick Anthony, and the object of his desires, Joanna was Sara Grace Nelson, who had the sweetest high soprano register I think I have ever heard.

The stand out performance for me though was undoubtedly Joseph Dillon, who aged only 16, {and reminding me of myself when I was his age a little too!}, gave a wonderful performance as Tobias Ragg.

With a strong supporting cast and even stronger chorus, this makes for a rather macabre but highly entertaining evening out. The show runs a little long, coming down at 10:20pm, but stick with it; Sondheim needs to be listened carefully to, otherwise you will miss many of the oh so clever lyrics and in this production Goggins has taken the songs just a tad slower to accommodate for this. It's worth it!

It has been quite a while since Manchester has been treated to Sweeney Todd's cold-blooded throat slitting, and it may well be a long time before the next; So catch it while you have the chance, by seeing it performed by one of Greater Manchester's premier amateur theatre companies.