The Drowsy Chaperone is a play about a Musical, a fictional Musical which we see played out on stage, interrupted by the play. It is a post-ironic, retro-modern satire on the Musical Theatre genre of the Broadway of the 1920s; and it uses an actor, in present day (the play), playing the audience a record of the Musical, which unfolds, hallucination-like, in front of our eyes in this man's own apartment; which he comments on throughout, interacting with - as much as one can interact with an apparition - well I think you get the idea!

It is hugely comedic, even self-depreciatingly so; and the show starts with the narrator, the protagonist without a name, the 'Man In The Chair' speaking to us in blackout. It takes a little for the audience to 'get it' - or at least it did this evening; but once they did, their laughter and appreciation was genuine and uncontrollable. The acting, singing, and dancing were of an extremely high standard, and the absolute highlight for me was to see not one, not two but three men tap dance their way through a brilliantly choreographed and executed Cold Feet. 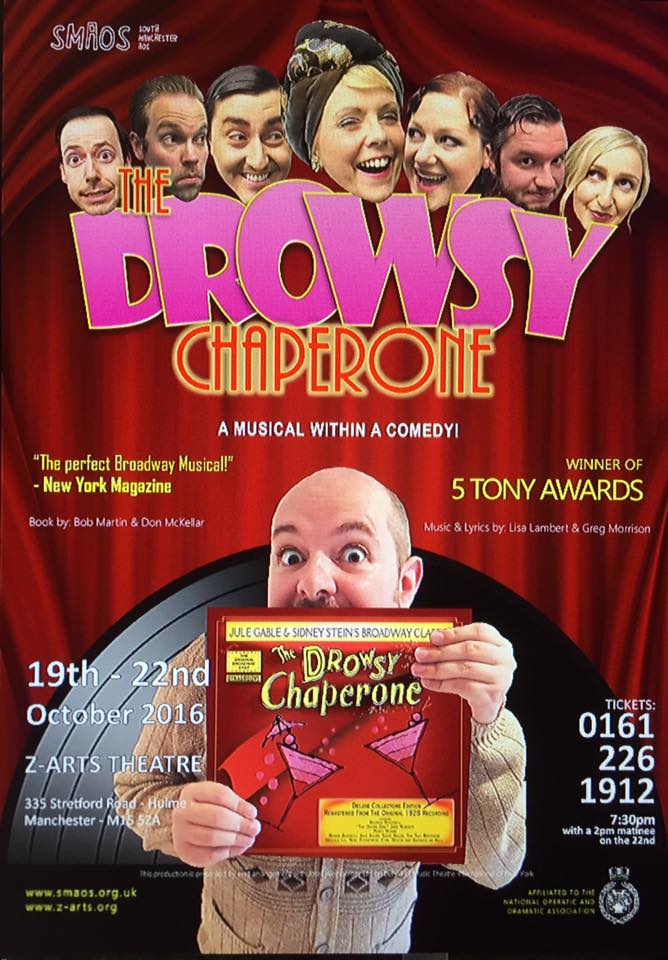 Kevin Proctor made the role of Man In Chair his own, and with his unique brand of cynicism and camp brought this character to life with aplomb. A highly entertaining and immensely watchable actor. The confusion starts with the rest of the cast, since they were throughout the show referred to variously by both the names of the characters they were playing in the fictional Musical of The Drowsy Chaperone, and by the names that these fictional characters were known by when not in the Musical - ie, their 'real' names. However, to try and simplify things here, I will credit them by their Drowsy Chaperone character names! The matinee idol figure in the show, was Robert Martin, played with panache by Andrew Ryder. A confident and all-round performance showing lots of eyes and teeth - lovely. The female 'love-interest' came in no less a performer as Kelly Harrington, playing Janet Van Der Graaff.

Vicki Clarkson made the absolute most of playing the lush and slightly unconventional chaperone of the title - drowsy we find out, because she falls in love (nothing to do with sleep!)- and her 'Anthem' solo was quite magnificent. Aldolpho, a mock Latin Lover character with false accent and comedic bravado but a huge personality, was played here by Sam McVaigh, whilst in absolute contrast, and proving that less is absolutely more, saw Mal Wallace steal the show for me with his incredibly well measured facial expressions and erect body language as 'Underling'.

All the principals were excellently cast, and the high quality of this production didn't stop there. The cameo roles were just as good seeing Chris Drayton and Oliver Pirk make a lovely gangster double-act, and Laura Sullivan shone at the end as Trix with her aeronautical final song. The chorus singing was excellent [John G. Barry] and the choreography and direction [Hannah Davis and Steph Niland respectively] was stylish, adventurous, and absolutely spot-on every time. There was only one thing in my opinion which let the whole thing down ever so slightly; and this was the set and LX plot.

The set, by Stephanie Niland, didn't really do it for me. What we were presented with was an Art Deco 'record' opening with the posters of Musicals flying from it. It was neither an extension of the Man's flat, nor was it a 1920's Broadway Musical stage set, and if I am honest it screamed 'budget'! I did like the smaller items of set brought on on the dolly though, and the aeroplane at the end was excellent. The LX plot (Julie Parker) was, for a Musical, really rather tame. It worked, but was not particularly adventurous. The central follow spot operated from the top of the auditorium staircase was somewhat shaky tonight too.

However, personal niggles aside, this is very much a humorous and feel-good comedy, and deserves full houses every night! Thank you SMAOS for introducing me to a Musical that I had hitherto never seen, and I look forward to seeing your next production in March.