In HOME's Theatre 2, a smaller studio theatre, Manchester School Of Theatre presented their first play this season with their third year students. The chosen play, David Hare's The Blue Room was a rather odd choice I thought, not least because it is one of Hare's lesser known and rarely performed works, but also because it is really a series of duologues which are connected only by one actor continuing into the next.

Each scene is a sexual liaison, whereby the stronger character controls the more submissive, and then the subsequent scene shows the submissive one from the previous scene take the upper hand and so on. It is an interesting concept but very 'samey' in the writing and the whole thing doesn't really go anywhere. 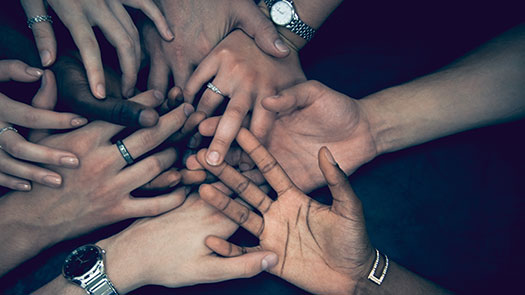 What this play needs therefore is a huge injection of life and energy to take this from the page and enthral an audience. I have seen several productions now by MST, and so I do know they are capable of this; and so I left the theatre this afternoon wondering why it did not happen on this occasion. The play is quite long, and director David Shirley chose to perform the piece straight through without an interval, meaning it lasted 125 minutes non-stop; the scene changes were long, laborious, and really quite unnecessary, and the actors never really were given the opportunity to get themselves out of first gear. All of this added and made up for the feeling of ennui which had started creeping in on me about half-way through.

As with all previous productions that I have seen by MST, the set was good. Here we were given an L-shaped space - completely blue - with 6 doors, and 2 large wooden boxes, again blue, which were used to make various shaped beds for each scene. I do feel that the play would have worked much better and swifter, and been a much rawer affair, had the set been left at that. The luxury of additional 'real' items to each scene seemed somehow to jar against the plainness and simplicity of what had already been created. I liked the costumes, but again, I would have preferred perhaps just a little less 'realism' in their detail, and perhaps they also could have been blue(?). Sound and lighting were excellent.

The cast of 10 were all good and strong actors, although despite it being only a studio theatre, I was struggling to hear many of the exchanges. Vocal projection seems to be something being very much neglected in actor training these days and that is such a pity. Since this is the beginning of their final year, I am very much looking forward to seeing how these performers grow over the next few months.

There were two stand-out performances in this play; and I choose them simply because they seemed to find another level in their characters. Hare's play is difficult and complex, despite seeming frivolous and simplistic on the surface; and his characters are all flawed and deep. Here Andie Morgan as The Married Woman and Xiolai Chen as The Model found a little more in their characters than just what is on the surface.