Set entirely in a pretty country garden, we meet Felix Humble (Toby Everett), an astrophysicist at Cambridge who is searching for and struggling to find a unified theory to explain the universe. He has returned home having received word of the death of his father, James Humble, a biology teacher and beekeeper. He is met by Mercy Lott (Eve Smith), the ditsy well-intentioned spinster who does the bidding of his mother, Flora Humble (Susan Reeve) whose appearance in her bug-like sunglasses and all round frenzy sets her out as the Queen Bee and provokes his regression and the return of a childhood stutter.

She blames Felix for embarrassing her at the funeral when it was his turn to deliver a eulogy. Felix, in the throes of grief about life, love and death, can’t forgive his mother for clearing out all his father’s things including the bees. And so starts the tale of a dysfunctional family, governed by a reversed social hierarchy and where humility errs more towards the classical lack of self-respect rather than the Christian virtue of a well-lived life. 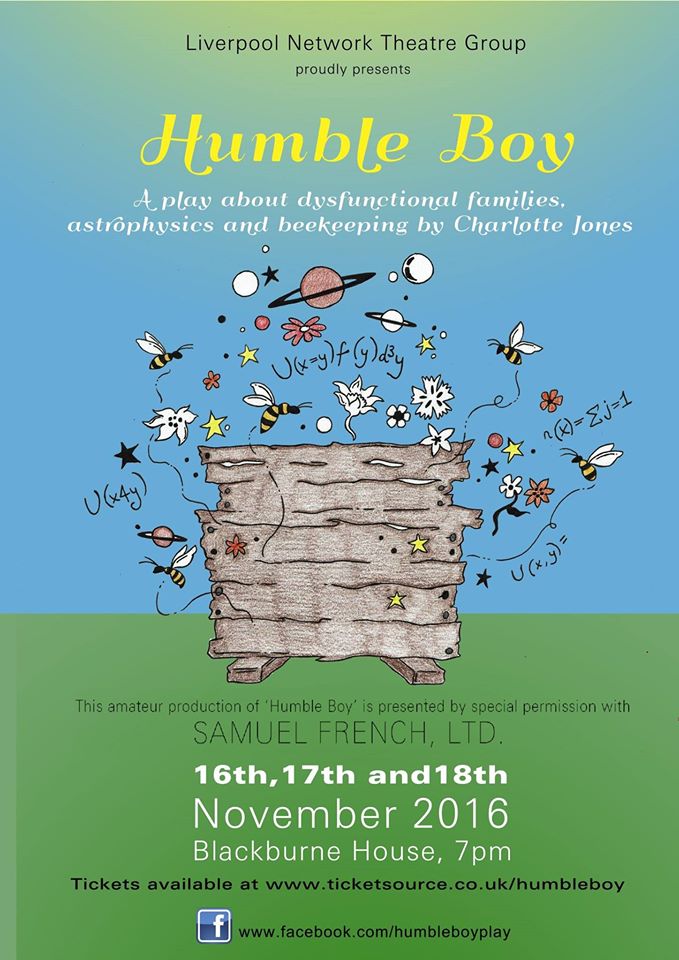 Added to this turmoil is Felix’ discovery that his mother plans to marry the earthy George Pye (Rob Steele), a semi-retired coach operator who is the complete opposite of his intellectual father and their exchanges are full of antagonism. The cause of the dislike is soon apparent when George’s daughter, Rosie Pye (Tahreen Kutub), arrives and we learn that she had once had an affair with Felix but he had deserted her. Rosie seems set on rescuing Felix and with a surprise or two in store. The most alarming is his discovery that his mother and George have been having an affair for many years and…ah well, no plot spoilers here! Thankfully for Felix he does have the likeable Jim the Gardener (Conor Burns) on hand to offer calming and wise words as he tries to come to terms with the loss of a father who it appears he didn’t know that well at all. In such circumstances and despite the green surroundings, confrontation is inevitable and all unfolds in the second half at the garden party held to celebrate Flora and George’s impending nuptials where amid a flurry of emotional outbursts and comic interludes, shocking revelations finally come to the fore.

This is a challenging play with strong overtures of Hamlet but also clearly influenced by the works of Ayckbourn and Stoppard. There are some overly explicit references to the finer aspects of theoretical physics which whilst demonstrating that the writer has done some detailed research, hardly complements the gentler Cotswolds antics on display. In a play that is often too rich in metaphor, this is an enjoyable and amusing production providing gentle laughs.

Everett, paunch and all, is dealt some very convoluted lines which to his credit he delivers with aplomb, stammers and all, in an accomplished performance where he captured perfectly the little boy lost. Reeve provides an effective and believable portrayal of the vain Flora and the interchanges between her character and Everett’s are powerful, probably benefitting from them having worked together recently, and there is good support from all the cast around them.

The Eleanor Rathbone Suite offered an opportunity to perform in the round which director Lauren Steele took full advantage of and the stage management team of Angela Millett and Mark Cooper have created a set which captures the summer garden scene perfectly and resplendent with trellis, flower beds, lawns and beehives, it even allows some natural irrigation to take place during the performance…!

There are two further performances on Thursday 17th and Friday 18th November, both starting at 7pm. Tickets are priced at £8 (Concessions £6.00) and are available from www.ticketsource.co.uk/humbleboy or on the door.

Blackburne House is a beautiful Grade II listed building, situated in Liverpool’s famous Hope Street quarter, close to the city centre. Attracting thousands of visitors each year, their facilities include a thriving café bar, a women’s health suite, excellent conference facilities and a 30-place nursery. The work they undertake enables individuals, organisations and businesses to positively impact on the local economy. For further details http://www.blackburnehouse.co.uk/