Guys and Dolls - The Council Chambers, The Students' Union, Manchester

Riding high off the success of their recent production of Godspell, UMMTS (University of Manchester Musical Theatre Society) have presented us with a very different type of show, with a totally different cast, and still come out of it smiling all the way to the bank!

The first thing to impress me this evening was the band, or should I actually call them an orchestra (?) It was an 18 strong 'ensemble' - a lot for such a small space - but they were utterly superb. Every nuance of this score was brought out in detail, and the balance of sounds created was exactly right every time. Here is a conductor and Musical Director who obviously knows his onions, and therefore he gets top billing in my review - Joe Hearson.

There was also one thing which did not impress last night, which unfortunately needs mentioning next, since it underpins everything that happened on stage. I found the directing, by Emily Oulton, really rather slapdash and messy. This was not true in her work on characterisations, but certainly it was when it came to that thing which we call 'blocking'. That is, the placing of the cast on the stage, where and when they move, and plotting their entrances and exits, and the placing of small set items, and their entrances and exits. I lost count of the number of times the same small item of set was brought in and out, and the small circular tables and wooden chairs were laboriously trundled across the entire stage to fit in the small aisles either side of the seating. All of this was very unnecessary, lengthening the show and slowing the pace. In general, the actors moved about far too much too. They needed to find a position and stay there. It was almost as if the floor was made of hot coals, the way some of the cast kept on moving around the stage. My stance (excuse the pun) on this is simple; if the move is justified, do it; if it isn't, stay put! The choice of staging didn't help either. Thrust format is a very difficult space to play, and the direction seemed at times to be at odds with the space.

Credit where credit is due though, and the characterisations and inter-relationships between them were all very well observed. The balance between realism and comedy nicely placed.

So, now to the acting. Once again, UMMTS seem to have chosen very well, and despite their youth and therefore perhaps also lack of experience, they all gave solid and believable performances, working well together and bringing this 'Golden Oldie' of a Musical very much to life. Eimear Crealey was the bible-bashing temperate Sarah Brown who finds her true life and love in the most unlikely, for her, of places - a well-known gambler, Sky Masterson, played here by Jack Hawkins. Rather suave and debonair with a hint of danger was the way he played it, and this suited him and the character very well. Jess Adams was the 'goyal' with a permanent cold due to the fact that she has been engaged for ever and seems that she will never get married, Miss Adelaide, the lead performer at The Hot Box Club. This is the role which, if not careful, can absolutely ruin the whole show. The character can become mono-dimensional, a Mickey-take, and the voice can irritate. Well thankfully none of that applied to Adams' interpretation. This was a very intelligent and cleverly measured study in how to make a singular, simple 'dumb-blonde' style character teeter on the edge of ridiculousness but stay firmly with both feet in the reality.

James Penniston was good old reliable Nathan Detroit, and seeing him fall from top dog at the beginning of the Musical through his frustrations and complications with love, the Law, and his fellow gamblers, to him almost spiralling out of control was again excellently measured; and he holds it all together and comes out of it all smiling - and married - in the final reel! A very personable performer with good charisma and stage presence.

However, despite all excellent efforts from the ensemble, the show was most definitely stolen this evening by a wonderful young actor / performer by the name of Josh Barnett. I have seen many productions of this perennial favourite, and I have never yet - until this evening that is - seen a Nicely Nicely Johnson who has been both absolutely real and believable, and yet also highly comedic at the same time. A high energy performance, with good singing and dancing skills too, which completely paid off.

The singing, in fact, was superb from all the cast. It is such a pity that the use of head mics diminishes the sound and quality of the voice. It would have been preferable to have heard them singing unamplified in such a small space, but of course when you have such a large band, that would have been impossible. Somehow though the balance had not been struck on the nose, and the sound levels were not quite right.

UMMTS have done it again - an amateur company comprised solely of students of Manchester University - and yet the high standard and quality of their shows is undeniable. A hugely enjoyable production, and I look forward to what the new year has is store for your society. 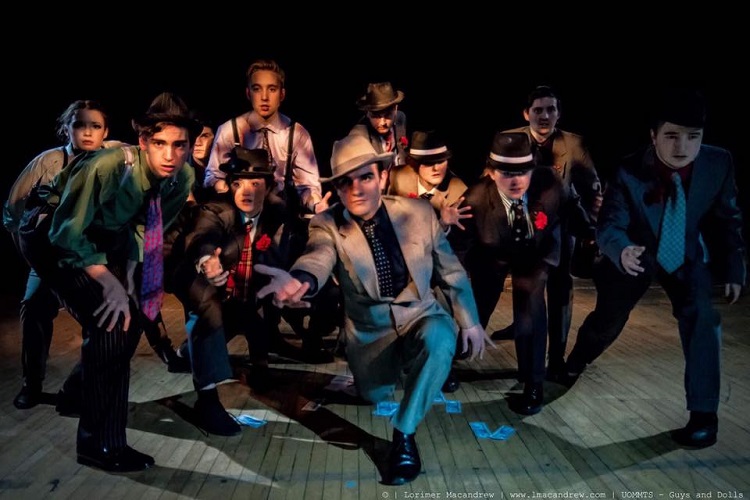