Sheffield based theatre group Splinters, formed in 1989 to bring the very best of Sheffield's young theatrical talent together, ranging from age 14-30.  The group recently celebrated their 25th Anniversary and decided to invite ex members to take part in their production of RENT, under the name of Splinters25, which was performed at the Crucible Theatre studio in Sheffield's city centre & was a major success. This gave the Company the urge to give older ex-members another chance to take part in another huge musical.  Fancying something with a bit more of an edge and not your normal run of the mill musical, they decided on the hit musical ROCK OF AGES.

To give the production the right sort of stage set up, suitable venues were discussed with the Octagon Centre, a performance venue which forms part of Sheffield University was agreed as the perfect set up for the large set, comprising of a full band on stage for the entire performance along a large bar (The Bourbon Room), being the main focus of the stage set for the duration of the show. 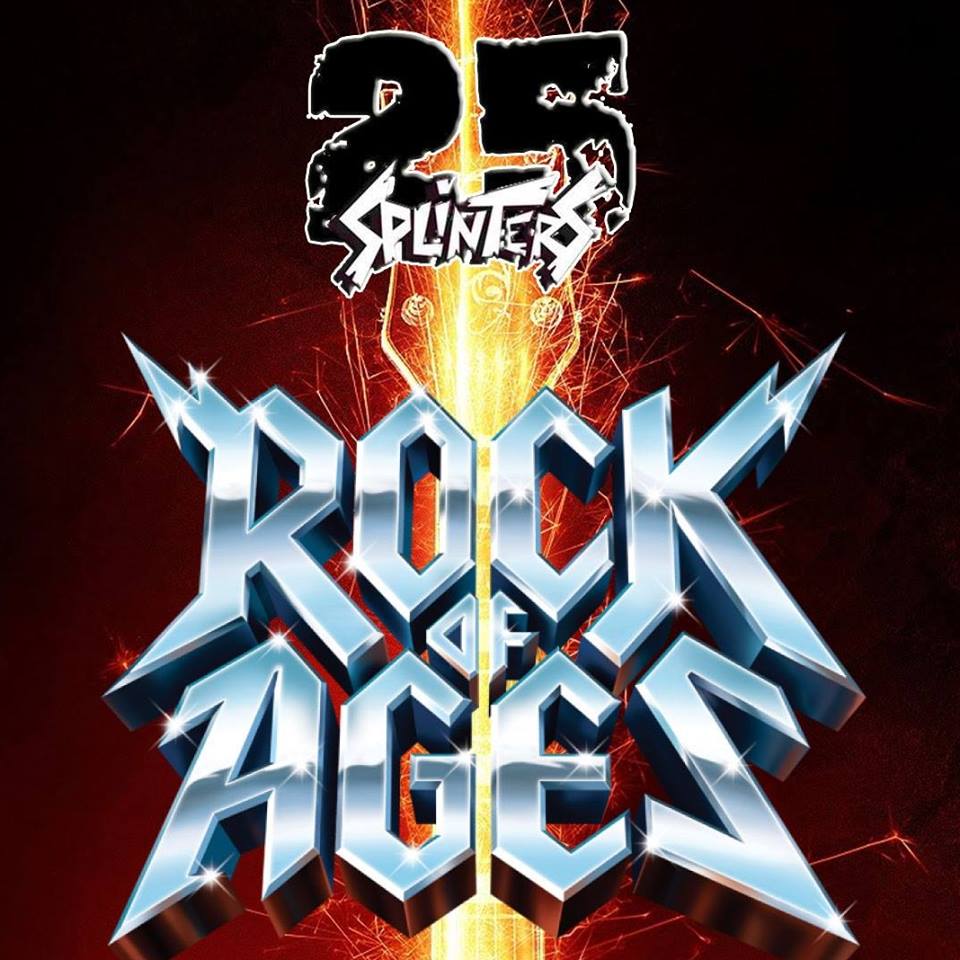 For anybody that lived through the 1970s (not me!) or the 1980s (me!), the shows songs will be somewhat familiar!  With hit power ballads including Journey's "Don't Stop Believing"', Pat Benetars "Hit Me With Your Best Shot" and Extremes sultry "More Than Words", the musical takes you on a nostalgic trip down memory lane with an uplifting feeling meaning you can't help but clap along and have the overwhelming urge to dance and sing along!

Rock of Ages is set in the mid to late eighties and is featured around the battle to save bar and music venue The Bourbon Room from impending doom.  The story opens with bar worker Lonny Barnett, who serves as the shows narrator, setting the scene for the story; it's the mid to late 1980s, where Drew Boley, an aspiring young rocker works as a busboy in the Hollywood bar/club, The Bourbon Room, owned by Dennis Dupree and assisted by Lonny.   Meanwhile Sherrie, a small-town girl, leaves her parents’ home in Paola, Kansas to head to Hollywood to follow her dreams to make it big as a Hollywood actress.  Drew and Sherrie meet on the streets of Hollywood where Drew (who introduces himself to her as his stage name, Wolfgang Von Colt) and Drew is instantly smitten.   He then convinces Dennis to give her a waitressing job at the Bourbon. The story follows the plans to demolish the Sunset Strip, including the proposed demolition of the beloved Bourbon room, and Drew’s mission to bag the girl of his dreams and become a rock star and is focused around several well-known soft rock songs of the 1980s era.

The stage is low set with a band set in full view at the back, with the Bourbon Room set up around them as this is the main feature throughout the storyline.  The cast made use of the floor space surrounding the stage which added to the feel of the show.  My only issue was that at times the band was often much louder than cast member vocals, particularly that of Danni B Hibbert who gave an otherwise outstanding performance as hippy protester Regina, meaning at times we totally missed lines of her sung performances.

My overall favorites of the night were Lonny and Franz (Mark Holmes & Matthew Bevan retrospectively).  Matthew portrayed Franz utter campiness with perfection! However, the whole cast gave an absolute stellar of a performance. I cannot recommended this production enough!