It is always a pleasure to attend a production performed by aspirational young people who will one day seek to progress through the industry. It is an equal honour to be invited to preview a show with such strong story as #YOLO by Matthew Bulgo, with a well-recognised group such as CYGNETS, as part of the National Theatre's Connections Festival 2017.

The first of two performances at Macclesfield’s Fallibroome Academy, before being transferred to the acclaimed Quays Theatre within The Lowry on Sunday 2nd April (7.30pm), for the festival. A further 28 local festivals are taking place across the country. This plot had undertones of Curious Incident of the Dog in The Night-Time.

Following the story of 17-year old Jack (Sam Pearson), from A-level results day (introduced, as with all of the scenes, through the song ‘Mr Brightside’) to a doctor’s appointment (Katherine Rushworth) to discover the reason for his ‘headaches’. The reason is shocking but unsurprising (well for the character, but not the audience) in the sense that many perceive that young people don’t get those kind of illnesses. Jack’s reaction is to ask whether it is a joke and seek to disclose the discovery to those close to him. Both his sister Josie (Charlotte English) and girlfriend Lucy (Kirsty Turpin) jump to conclusions when faced with “I have something to tell you” and their annoying ignorance is sadly that of real-life. 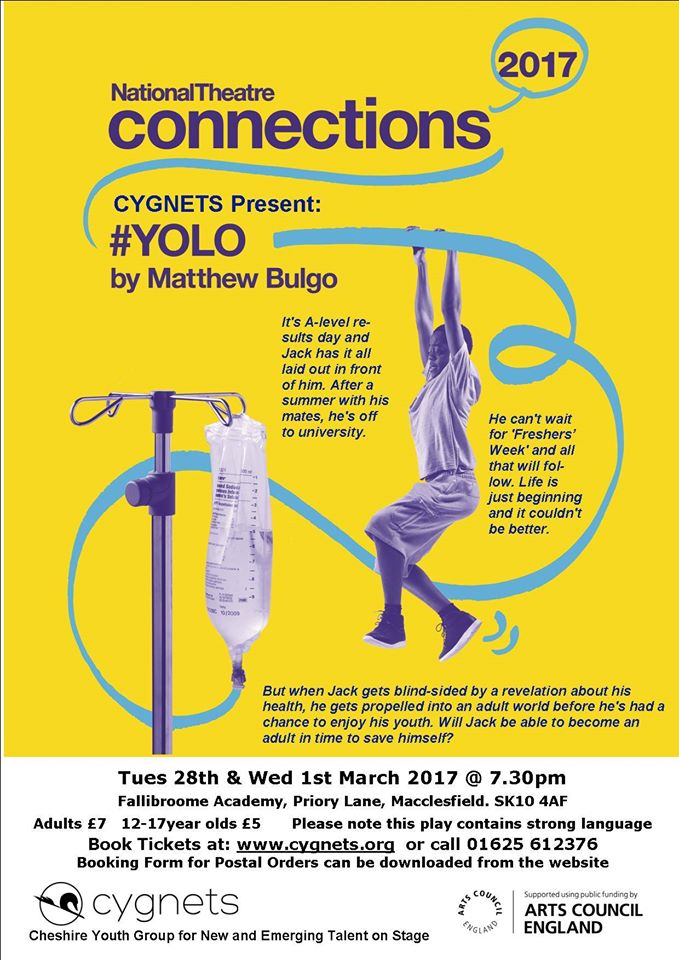 Most scenes lacked momentum, especially those of confrontation as this was either portrayed as a monologue (in the break-up scene, Lucy did most of the talking about how she thought Jack must be seeing someone else, he didn’t defend himself, regardless of whether he wanted to remain a ‘coward’ and not tell her the real reason) or, in the case of his losing his friend Johnno (Kieran Odedra), where it just wasn’t passionate enough to build up to ‘blows’. The problem then being that the piece wouldn’t be long enough for the hour required for the festival and it was almost as though scenes like the drinking scene on ‘a beach’ (For the lead and director, ‘the throwing’ needs work as it was not concealed) where Jack got drunk very quickly, without even drinking from the single bottle, went on forever. Other than having to deal with the disclosure of his condition, I struggled to see at what point Jack becomes an adult (synopsis asks “will he be able to become an adult in time to save himself?”) other than blocking out his denial through his headphones…

As mentioned the scenes were set with songs of relevance (The Fray’s How to Save A Life: “Where Did I Go Wrong, I Lost A Friend”, Green Day’s Boulevard Of Broken Dreams: “I Walk A Lonely Road” and Imagine Dragons’ “Radioactive”, for example) which was well-done, as well as projections behind. I was somewhat confused at times where some scenes were taking place because of the vagueness of the backdrop - a students’ union, a pub or a house party? More confusion came due to the placement of the microphones at the front of the stage, making speech quiet and hard to decipher in the beautiful theatre space.

Although I can’t argue with the hard-hitting story within the script, my points are based on how it could be delivered and how it could be portrayed more naturally. We all know someone who has been affected by an illness. How would we feel if they started to become distant, lonely, upset and had something to tell us? What about once they had told us? Would you support them, be sympathetic or shocked? These are the things that make a show more hard-hitting and relatable.

That said and proving the point, the doctor’s scene, the second scene with Josie (omitting the inconsistency that she offers him food and a chat when he has already announced that he needs to go to the hospital on that day) and the end where Jack’s friends attend the hospital (news travels fast!) before his operation (of which we never find out the result) are the most poignant.

The lighting improved after the odd settings at the start but possibly due to the quick scene changing from straight line to clumps, etc. and the blocking was well thought out by director Kalini Kent. With attendance by National Theatre directors tomorrow night (Wednesday), I am sure a few minor improvements will be made before we have the pleasure to witness it during the festival. Congratulations once again on being chosen to take part, amidst stiff competition.

For details of the National Theatre Connections 217 at The Lowry, visit: www.thelowry.com/event/the-lowry-nt-connections-festival-20172