The rarely performed but incredibly hauntingly beautiful Musical, The Secret Garden, based on the Frances Hodgson Barnett novel of the same name, is the latest offering from those talented folk over at Altrincham Garrick.

I bet I am perhaps only one of a handful of audience members to have had any previous encounter with this Musical; having seen the pre-Broadway try-out and being the proud owner of the Original Cast Recording CD. However, even that did not prepare me for the open-plan composite set designed for this production by Barry Purves. I have to admit that upon entering the auditorium I immediately hated it; however, I do also have to admit that it was both appropriate and it worked. I am unsure of the significance or need for the dolls' house on the floor by stage left, but the clever use of curtains across the main raised playing area, and some inventive silhouettes (some working better than others), and the Musical had an apt 'bit of earth' to work on.

In mentioning the design, I must also mention the excellent idea of using suitcases and valises to create furniture, images, walls, and even the garden itself. It was a lovely visual allegory which worked very well. 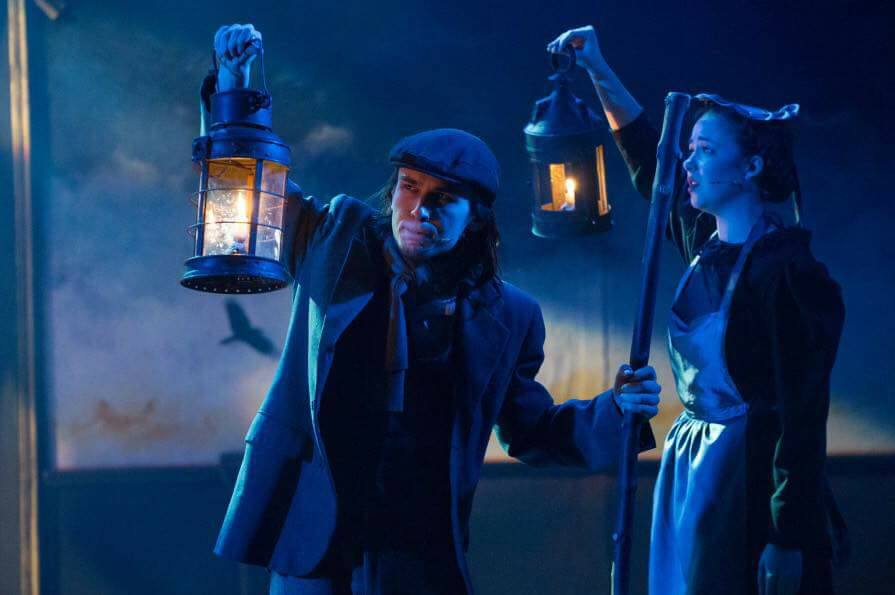 The only slight negative - yes, let's get this out the way first - was the lack of pace. The Musical did drag, especially the first half. I think one of the things which made it feel longer was that the direction (Joseph Meighan) never altered; everything was so predictable and happened always at the same pace. The only real change - and even then, it was a visual rather than a change in mood or pace - was the garden's transformation. The other thing which hinders this is the story itself. It is a Victorian melodrama, telling the story of a young girl who becomes orphaned due to an outbreak of cholera in the India of the Raj, and so is sent to live with her only living relative, her uncle Craven in a large, rambling and haunted mansion house on the moors of Yorkshire. Once there she changes everyone's lives around, and brings joy and happiness back to the house, by daring to enter the closed Secret Garden which was locked after the unfortunate death of Lily.

But let's look at the acting and singing, which was actually really superb. A better Mary Lennox could not have been found. The young Alice Cross (8 years old in real life) played this role with arrogant petulance at the start, warming slowly and becoming more mellow as the play progressed, exactly as the role demanded; and her lovely duet with Dickon in Act 2, 'Wick' was definitely a highlight.

Joshua Lloyd (with a singing voice reminiscent of Colm Wilkinson) made the absolute most of his character as her uncle Archibald Craven. A fine interpretation. However, I did find it extremely odd that he needed a stick to help him walk at the beginning and towards the end, however he abandoned this for the most of his entrances. His brother, friend, doctor, and permanent house guest, Neville Craven was played with style (and some rather fitting long hair!), by Chris Wagstaff, and the housekeeper Mrs. Medlock was played with a genuine honesty and a true Yorkshire accent by Ros Greenwood.

Supporting these protagonists were an array of smaller roles, most notably Sasha Carillo De Albornoz abandoning her black Morticia costume from the last time I saw her on stage for a white ghostly frock, and singing purely and beautifully. Dave Richardson as head gardener Ben Weatherstaff was the only other cast member to speak in Yorkshire brogue throughout, and his personable, affable deference made him instantly likeable. The impressive young actor David Beeby brought a new lease of life and a lovely interpretation to the character of Dickon; an older boy who is more at home outdoors and speaks to animals and birds and understand nature better than he does humans; whilst the very young boy, Theo Hill played the bed-ridden son of Archie and Lily Craven, Colin with accomplished ease.

With the Music under the firm and talented hands of Mark Goggins, the songs and incidental music were brought to stunning life, although I doubt anyone will leave humming the tunes as they leave, they are not the toe-tapping catchy type, but more in keeping with the sweeping and dramatic wuthering landscape of the Yorkshire Moors.