Based on the 1970s TV series (by Eric Chappell) of the same name, Rising Damp is a comedy based on the lives of tenants in seedy landlord Mr. Rigsby’s run down bedsits within a Victorian townhouse, in Leeds, West Yorkshire.

In the opening scene, we meet young Medical student Alan, a naive and innocent teen.  Unknowingly to poor Alan, Mr Rigsby has failed to inform Alan that he will no longer have sole use of the bedsit as originally promised to Alan’s father who originally organised the accommodation on behalf of son Alan. Instead he is to share with planning student Philip Smith, who claims to be the son of an African Chief and to have ten wives!  The pair soon become accustomed to each other and have fun winding Rigsby up, with both students catching the eye of fellow neighbour Ruth Jones. 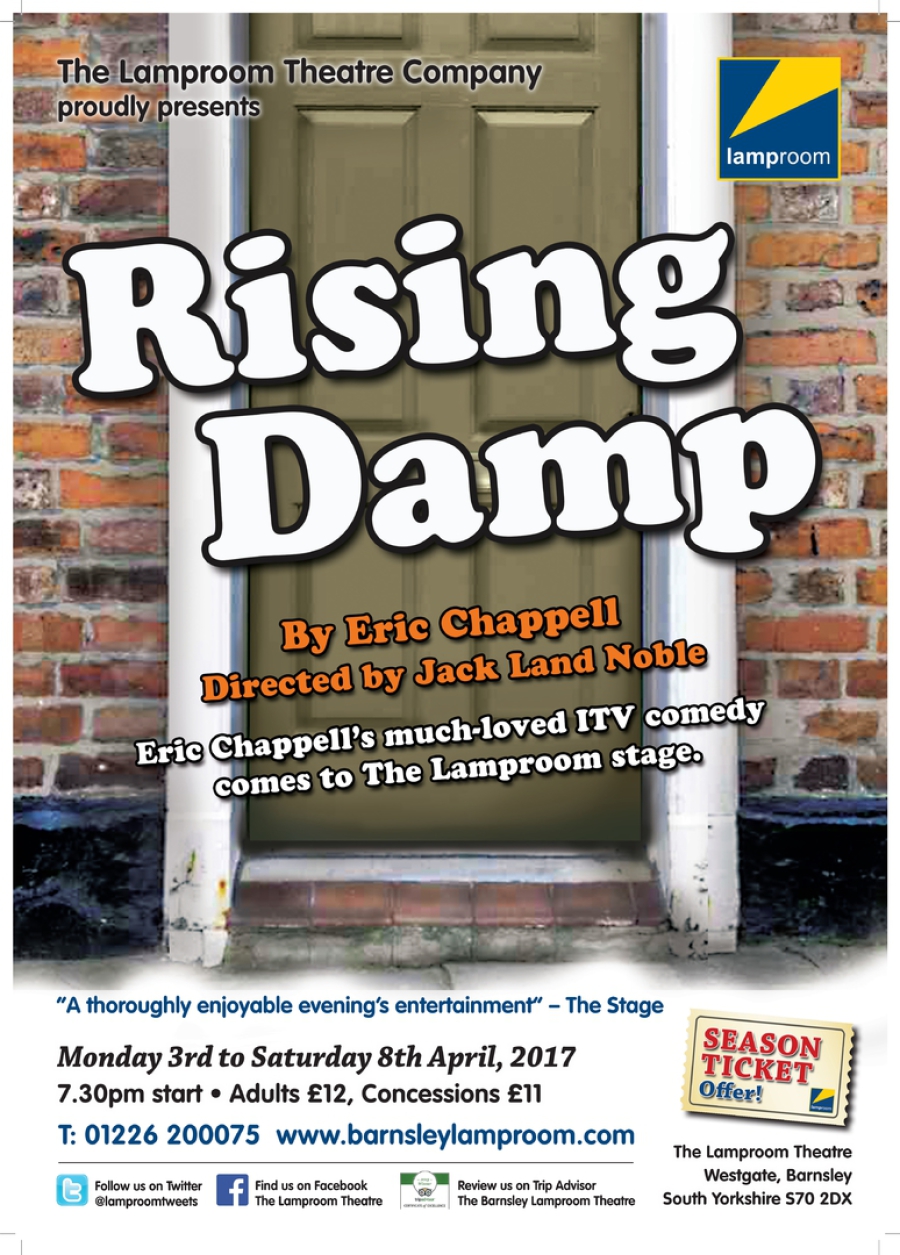 The bedsit is run down to say the least – on the day he moves in, Alan questions Rigsby about the water running down the walls, to which Rigsby retorts, “Well what did you except? Champagne?!”  In fact when anything about the maintenance or condition of the property is raised with Rigsby, he is both rude and unhelpful and the pair continue to tolerate the poor excuse of a home.  From burnt and peeling wallpaper, to a hole in the floor (hidden by a rug which they have to manoeuvre round carefully to avoid the inevitable happening.  As the story progresses we learn about the characters past love lives and discover the truth about Philip’s background.

The play is filled with witty one-liners, political incorrectness and plenty of laugh-out-loud moments.  Until this evening I had no idea what the play was going to be about, as the TV series was well before my time.  Not wanting to spoil the element of surprise I purposely avoided reading up on it or even glancing at the theatre programme, but during the interval I heard fellow theatre goers say just how much like the TV characters the cast were.  It wasn’t until I got home and logged onto YouTube that I was able to agree with them.  In fact, the more I watched on YouTube the more I stopped seeing the original cast but was seeing the Lamproom cast instead!

The cast of four each gave an outstandingly accurate portrayal of their original characters.  From Richard Caile as the dour and tight fisted Rigsby, to Ryan Howe, as young and naïve medical student Alan, to Robin Reid as ladies man Philip Smith, who woos women with his claim to being an African Prince.  However, the real stand out performance of the evening came from Sally Moxon as middle class love interest to all three guys, Ruth Jones.  It was Moxons’ performance that really brought the whole thing together.

Overall Rising Damp makes for a light-hearted evening’s entertainment and is definitely worth a watch, especially if you were a fan of the original television series.

Although a couple of performances are sold out as per the Box Office, there is still a good availability for other evenings.  The Box Office can be contacted on 01226 200075.

I was excited to see that The Lamproom Theatre are bringing another TV classic to the stage later this year, and this time one I have fond memories of watching reruns with my parents as a child – Steptoe and Son!  I most certainly plan to take my family along to that one!