Having seen the professional version of this classic show, famously known from the film starring Bing Crosby and Danny Kaye back in 1954, at West Yorkshire Playhouse during the festive period last year, I had an open mind about Dukinfield Amateur Operatic and Dramatic Society's production of White Christmas, especially considering - what others have been concerned about - it is only October!

Nonetheless, the show - which starts at 7.15pm, at George Lawton Hall - opens with a setting of 1944’s Christmas Eve where two World War II US Army soldiers; Broadway entertainer Captain Bob Wallace (David Noble) and aspiring entertainer Private Phil Davis (Ben Drane) perform for the 151st Division. Word has spread that their beloved commanding officer, Major General Thomas F. Waverly (Peter Bowler), is being relieved of command and as he arrives for the end of the show and delivers an emotional farewell, the troops give him a rousing send-off with "The Old Man".

After the war, Bob and Phil make it big, eventually becoming successful producers. They mount their newest hit musical titled Playing Around and the same day receive a letter from "Freckle-Faced Haynes, the dog-faced boy," their mess sergeant from the war, asking them to look at an act which his two sisters are doing.

Upon meeting the Hynes daughters, Phil falls instantly for Judy (Amy Turner) whilst Bob is reluctant to do so with Betty (Carolynne Jones Crowder) with her expressing the same feelings. Determined to get them together Phil and Judy plot to get them on the girls’ train to Vermont to see their act, which they later perform to attract visitors to the guesthouse that retired General Waverly now runs, with concierge Martha Wilson (Rosemarie Wood).

In a presentation of spectacular ensemble numbers like “Snow” and “Blue Skies”, Jean Johnson’s stunning choreography is executed with such synchronisation, particularly in “Sisters”, “The Best Things Happen While You’re Dancing”, “I Love a Piano” and “White Christmas”. The outstandingly powerful and pitch-perfect band are brilliant under the baton of Dave Chapman.

Vocally the show is very strong and hard to know that it is not a professional production, with David Noble and Rosemarie Wood’s tones taking top prizes in the vocal highlights, everyone else’s songs were excellent also, despite a few slightly off notes. As well as “Sisters”, highlights for me are “Let Me Sing and I’m Happy” and the beautiful “Count Your Blessings”.

It is lovely to see cameos from Scott Lees’ Ezekiel and Olivia Mulvey’s ‘granddaughter of the General’ Susan show off their vocal talents no matter how brief. Other cameos also stood out but there are too many to mention.

In a similar style to Cole Porter’s High Society, Irving Berlin’s classic songs make for a grand night’s entertainment, along with the amazing costumes and dedication and focus of the cast (shown when a cue was missed and a pause was awkwardly present on stage, being very well-recovered). Poignancy is often found in musicals and this show starts and ends with it, both relating to the General’s retirement and return to/from his position. With the commemoration of the centenary of WWI and 70 years since the end of WWII, it is even more poignant and makes one wonder whether that was a reason to choose this show, aside from the readiness of audience members for Christmas before being able to indulge in Halloween and Guy Fawkes’.

Aside from some lighting errors towards the end of the show, this really is a close-to-professional production and I extend commendation to all involved. After my first visit to the George Lawton Hall, I am eager to return for Dukinfield’s offering of The Producers, if not to view another local group before that. 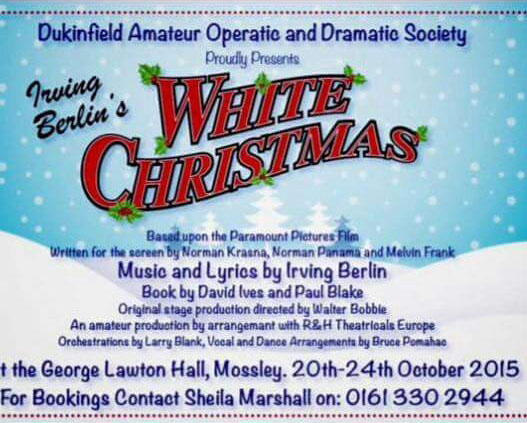