Take a group of young Liverpudlian decorators, a half-finished presidential palace, and an illicit nightclub. Throw in an Iraqi dictator and the (first) Gulf War in 1990, and you wouldn’t believe it was possible until you discover it is based on the real-life experiences of Dave Thelwell and you are set up for an engaging evening of theatre.

David (Andrew Games), Jimmy (Emmett Meehan), and Norman (Daryl Blackburn), three comically-characterised Scousers, are down on their luck and desperate for work so the opportunity to go to Baghdad, which is most definitely not in Wales, is grabbed by all hands and allows for much humour in Mike Howl’s funny and fast moving script, further enhanced by cast contributions, as we are treated to some high-energy slapstick performances before all too quickly they find themselves embroiled in the international crisis that followed Iraq’s invasion of Kuwait.

Denied the opportunity to leave, they are subsequently informed by their boss, Mike (Murphy Rhodes), that they are no longer going to be paid and are at risk of becoming hostages. Before we can get too worried however, their response – to help themselves to items from the palace and build a nightclub in true Liverpool-style - cues laughs all round. 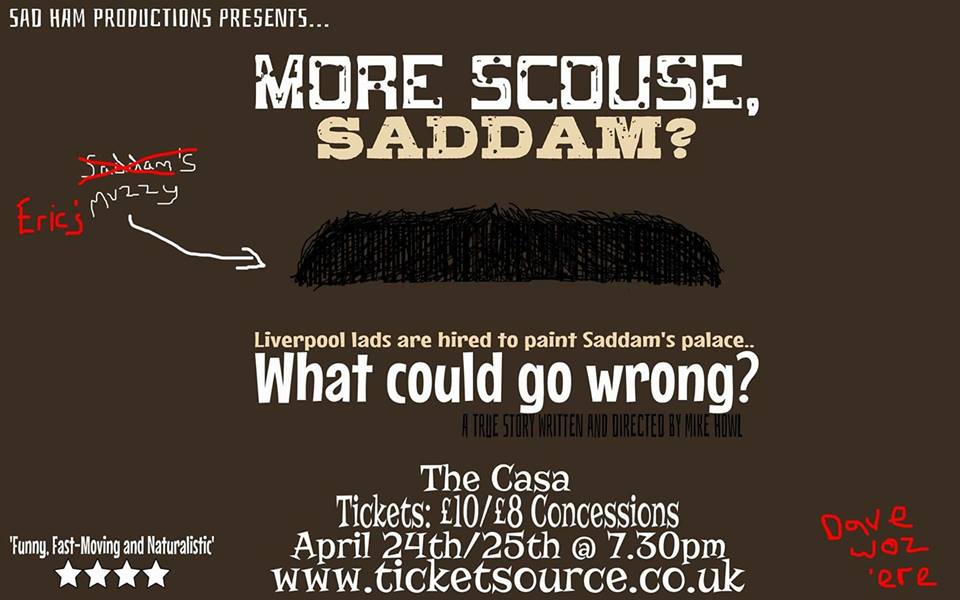 It’s not all about the boys though as the left behind wives, Jackie (Ciara O’Neill) and Joan (Jazz Jago), allow us to see the girls at play whilst the boys are away in scenes played for full comedy value yet which cleverly give us a glimpse into the emotional needs of all the characters, notably through their long-distance phone calls with Dave and Jimmy respectively. Nothing will get them, or us, down however, and in their hour of need they hook up with a television reporter (Rosie O’Neill) who takes them to Baghdad to try and bring their men home, with some interesting use of multimedia to keep the laughs flowing.

Whilst the tragic elements are generally suppressed in favour of the comedy, there’s no getting away from what must have been a very challenging time which is perfectly captured in one heart-breaking scene when the boys meet the wife (Faye Draper) of a hostage – the silence in the audience at that point was deafening.

It’s an entertaining production, very much played for laughs, and with all the cast performing strongly, the audience were in stitches throughout so it certainly succeeds on that score. I would like to see the deeper aspects being explored further and the structure of the play is certainly flexible enough to allow a slightly different approach which may increase its appeal outside of Liverpool. So that leaves only one question: who’s playing Eric? You’ll have to come and see the show for the answer to that one…

The show will also be appearing as part of the Liverpool Fringe with performances scheduled at 81 Renshaw Street on 17th, 18th, and 19th June. Further details available at http://liverpoolfringe.co.uk/index.html