Birkenhead Operatic Society Trust (BOST) brought their latest production of 'Anything Goes' to the stage this evening and there followed one of the most colourful, bright, funny and highly entertaining shows I have seen for a while. This wonderful musical with music of Cole Porter is the perfect platform to flaunt the excellent talents of this company.

Supported by a fabulous orchestra who started off the show before the curtain rose with the obvious 'Anything Goes' had the audience head bobbing along but then followed with another tune which made the intro just that little too long. Anyway, on with the show and apart from a couple of lighting issues at the start leaving the cast in shadows which I will put down to first night technicalities, what a treat was in store for us all. 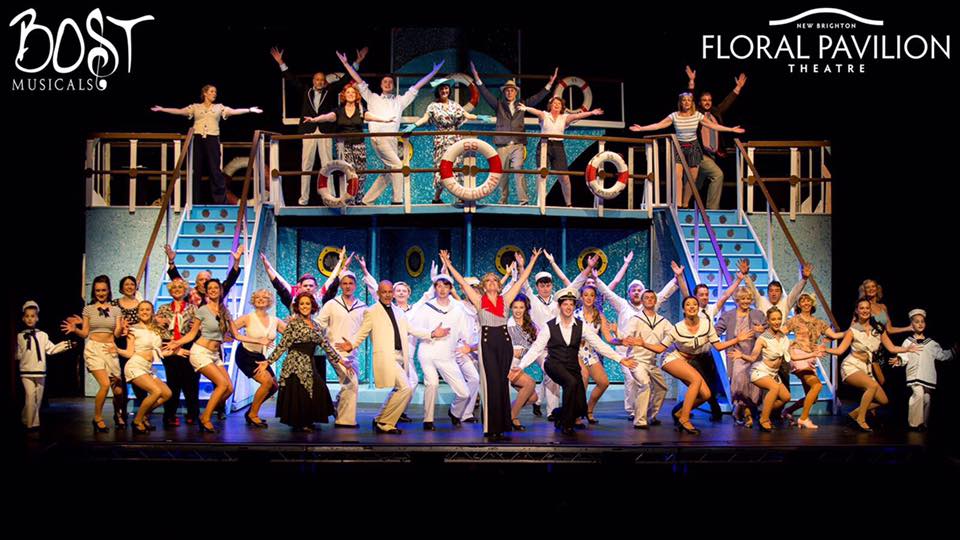 Set aboard the S. S. American on a voyage from New York to London it's basically a love story of boy, Billy Crocker, (John Tetlow) meets girl, Hope Harcourt (Sarah Chidlow) the love of his life from an unforgettable night, who is about to be married to the wealthy Englishman, Lord Evelyn Oakleigh (Wesley Wharton) to the delight of her mother Evangeline Harcourt (Diane Dale) who sees an end to their 'poverty' with him. No true love story runs smoothly and this is no exception. Billy is only aboard the vessel looking for his boss who has forgotten his passport but upon seeing Hope he desperately seeks a ticket to stay on board and try to woo her back. With a twist of fate also aboard the ship is Moonface Martin (Tony Prince), a man wanted by the FBI and much to his disgust is currently listed as their number 13 most wanted, will he make it to the number one spot? Disguised as a Bishop the ambling gangster has a spare ticket as his accomplice Snake Eyes has been warned not to travel. Unknowingly Billy directs the FBI in the direction of a real Bishop on board, Henry T Dobson (Jimmy McLoughlin) and in gratitude Moonface hands the spare ticket to Billy.

There follows a brilliantly scripted musical with exceptional talent from many of its cast, in particular the part of Reno Sweeney a night club singer portrayed by Linzi Stefanov who not only has amazing vocals but also a relaxed and easy manner with her acting skills, born for the part. The drunken Elisha Whitney (Eddie Bentley) makes one wonder just how much was consumed in the research of this part so convincingly is it performed!  Scene stealer is the Purser, (Andrew Heath) who with his overly camp style has the audience in stitches with his every appearance. Tetlow is likeable from the start as his character and also shows a great talent in singing. There were some real comedic moments with Wharton too.

Throughout the show there is perfect comedy timing with not just one or two performers but with each and everyone, whether at front of stage or background, all worked extremely hard to put on this musical and it shows with the incredible ease the song and dance routines appear, everything just flowed. The costumes added glamour and colour and the scenery mainly set upon the deck of the ship was changed quickly and smoothly.

Space does not permit me to mention everyone individually but all principal parts were perfectly cast and I cannot imagine anyone performing them better than they did. For an amateur group this is an extremely professional production and one that I urge people to go along to. Not to be missed!