First produced on Broadway in 1995, the musical revue, Smokey Joe’s Cafe celebrates the legendary musical partnership of Jerry Leiber and Mike Stoller, who amongst others wrote hits for Elvis Presley, Ben E King and The Drifters. Leiber and Stoller’s list of musical credits include some of the very best songs written in the 1950s and 60s including: “Jailhouse Rock,” “Yakety Yak,” “Poison Ivy,” “Spanish Harlem,” and of course the timeless classic, “Stand By Me.”

Smokey’ Joe’s Cafe features over 40 songs, each performed without any introduction. With no narrative to follow, the show relies heavily on the skill and the talent of the cast to sustain the audiences’ interest. Thanks to an energetic and spirited cast, this production, presented by the Hyde Musical Society is both entertaining and illuminating, featuring as it does an extensive back catalogue of songs written and performed in various musical styles. The revue like nature of the show enables Leiber and Stoller and their songs, to be fully appreciated on their own merits. What emerges after two hours plus is a fantastic tribute to two of the 20th Century’s most successful and influential song writers, who between them pretty much invented Rock and Roll.

Expertly directed and choreographed by Jean Ashworth, the hard working cast of 13 singers and dancers, put their heart and soul into the production. Just before the show started I was told that due to illness a member of the cast was unable to perform but so slick and polished was the production, that had I not been told this I would not have noticed that anything was out of place. In a Company of distinguished performers, special mention must go to both Pam Syme and Nick Ward, who effortlessly and stylishly perform a series of solo numbers with gusto and great musicality.

The production is presented simply on a black box set with the excellent six piece band, led by M.D. Simon Pickup, featured prominently on stage throughout. Sound designer John Ormerod does a great job ensuring a good balance between the performers and the band throughout.

Although I enjoyed watching Smokey Joe’s Cafe and would strongly recommend that others go and see it before it finishes on Saturday, the lack of a book did make the show feel a little bit repetitive in places and I did hear other members of the audience saying the same thing during the interval. I notice that Hyde Musical Society’s next production is Into The Woods. As a huge fan of Musical Theatre and especially Stephen Sondheim, I’m looking forward very much to seeing this talented group take on this show and I will be booking my ticket for this as soon as I can. 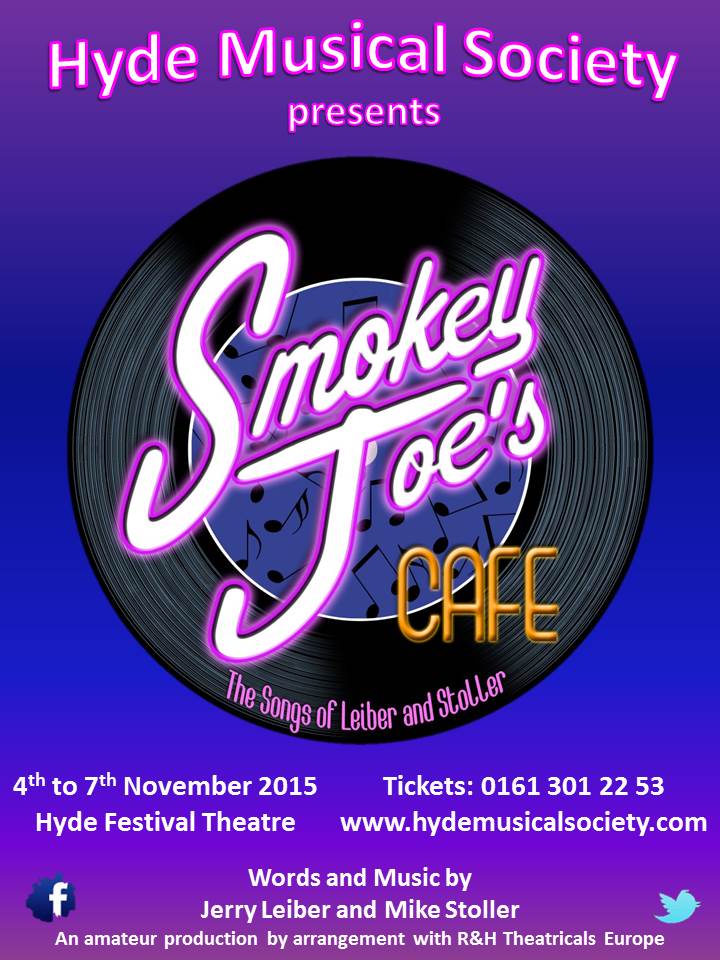