The City and The Value of Things - Everyman Theatre, Liverpool

If you live in some of the largest cities in the UK such as London, Birmingham or Liverpool then you’re probably programmed to ignore the hustle and bustle around us as we go about our busy schedules every day. We may see that local man who sits in the same spot, day in and day out with nothing but a sleeping bag for comfort. But, do we actually allow ourselves to see more than the dismal looking character in front of us?

I know I am not alone in saying that I have turned a blind eye to those in the past. Young Everyman Playhouse presents to use The City and The Value Of Things bringing what can only be described as a compelling piece of theatre, that provokes your deepest and darkest thoughts surrounding the issues that are in society today in these cities.

The phrase ‘Quality over quantity’ most certainly does not apply here. Especially, when you have 56 performers who bring passion, dedication and grit to their performances and roles tonight. It’s clear to see the diversity among the talented cast, heightened by their individual costumes but it’s their unity and appreciation of one another when on stage that I think creates a strong production of young aspiring performers.

Based around a ‘Hunger Games’ twist on the classic board game Monopoly we see YEP tackle issues in these cities today such as; love and relationships, feminism and equality, freedom of speech, the ever growing issues of homelessness and living on the breadline to name a few. Focusing on how those with higher financial status have power and cleverly disguising them, into the game as the well-known figurines from Monopoly. 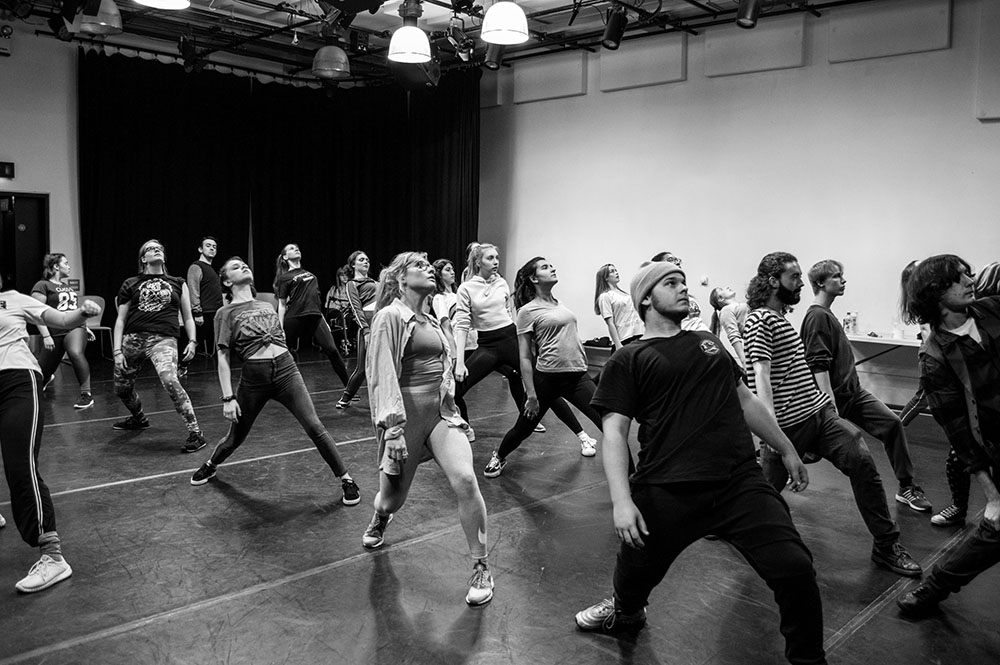 It’s a modern concept that works brilliantly and to see that it was devised by Young Everyman Playhouse themselves shows that the talent isn’t just in their acting and the use of realism and humour is perfectly balanced. The portrayal of the ever growing ‘Student Accommodation’ that is flooding our cities and the ‘Housing Issues’ (supported by the good use of set) where two highlights for me in this production and it really strikes a chord when you can relate with the storyline - as I am sure many of us in the audience did tonight, seeing the daily struggle of our issues falling on deaf ears. It wasn’t only the concept that impressed tonight it was the professionalism that the performers took on, it’s not easy to portray such mature stories at young ages but the delivery of the issues raised was done so realistic and that’s because it’s happening to all of us and we have all been affected one way or another by issues raised in this production. Chloe Nall-Smith and Keeley Ray took on the roles of G & T tonight and their dynamic comedy duo stood out, as did Natalie Vaughan who portrayed Debbie and really grasped her role as a 21st century ‘breadline’ scouse mother well, performances you should all be proud of. But, every single member of YEP deserves a mention for their performances tonight so WELL DONE! If I had one constructive criticism it would be that the running in the ‘Ariana Grande’ scene was slightly distracting due to the noise of the feet, maybe some more running on the toes is needed to provide a quieter sound to avoid distraction from the ongoing scene.

Chris Tomlinson & Matt Rutter have directed something special with The City and The Value of Things and trust me I am not easily pleased when it comes to theatre. The use of a scaffolding structure to portray the housing units works perfectly from an audience perspective and adds visual levels and dynamics to the story, a clever design to support the performance. We are treated to sharp formations and patterns, dynamic use of the space and artistic characteristic of ‘Wii Characters’ by movement director Grace Goulding who shows that sometimes small, isolated moves can be visually effective if done correctly and in the right concept.

If this was a professional production I would not hesitate in giving this 5/5 stars in the review and I hope this could developed in the future because it’s a perfect portrayal of 21st century issues, cleverly portrayed by strong young performers. Please support local talent by seeing this wonderful production if you get the chance!

Image taken at reheaarsals for the production.