Priscilla - Queen of the Desert, follows the journey of Tick/Mitzi Mitosis (Rob Baldock), and his two friends, Bernadette, formerly Ralph (Neil Townsend) and Adam/Felicia (Reece Oliver) as they trek across Australia in a camper van they have lovingly named Priscilla.

Tick is a drag queen and has received a phone call from his estranged wife Marion (Danielle Wrench), who is desperately in need of an act to perform at her club and although he is reluctant at first, when she reveals their young son Benji (Freddie Howson) wants to meet his father, the deal is sealed. Not wishing to go alone Tick contacts a former 'Les Girl' dancer Bernadette, now an aging transsexual who informs him she is recently widowed from her 25 year old husband. Tick attends the funeral and persuades her to travel with him but she is less then pleased to learn that another young drag queen Felicia is joining them.

Opening the show are three glamorous soul and Motown style Divas, (Stephanie Goodridge, Danielle Jones and Cinzia Lanza), who appear in the circle box at the side of the stage. They give a fabulous and rousing 'It's Raining Men' and although it was a little distracting to what was happening on stage at that moment, I can understand the improvisation as the divas normally make an entrance being lowered onto the stage from above. They provide strong vocals during many of the numbers covered in the show. Miss Understanding (Neal Sandwell) performs well with 'What's Love Got To Do With It?' and at the funeral with 'I Say A Little Prayer' along with Tick and the Divas. 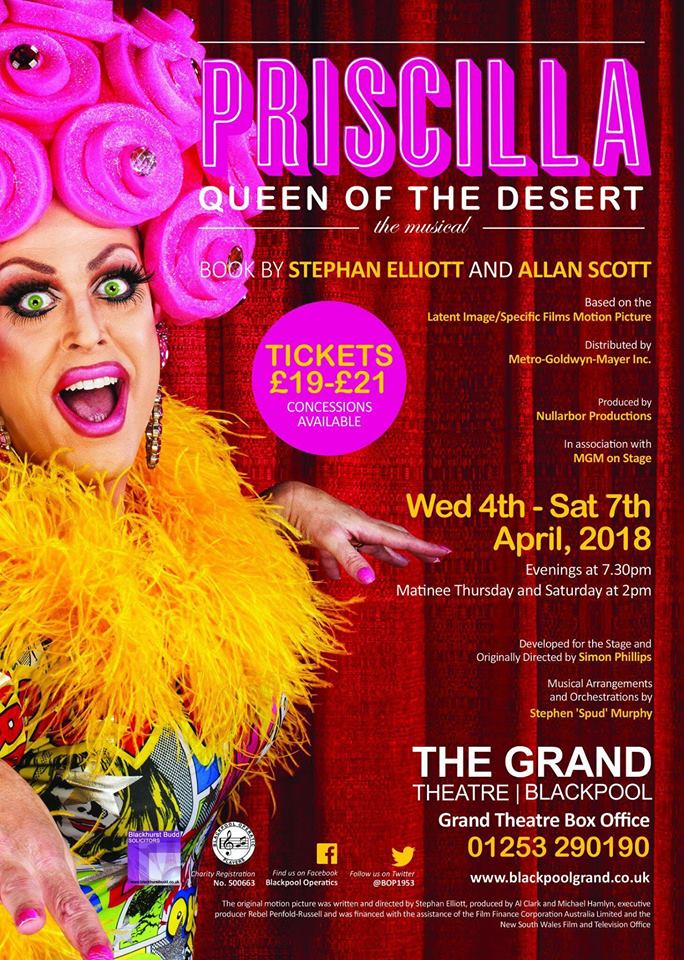 All three drag queens perform their roles superbly but particularly Oliver. Oh my, if anyone loves their character he does, totally embracing every part and performing delightfully with cockiness and flamboyance, whether singing or giving amazing high kicks, doing the splits and not even tottering on killer heels! Bernadette is always the lady, still looking for her ' One Romance', charming, dignified (in comparison to Felicia) and Townsend does this amazingly well. With no love lost between Bernadette and Felicia there are many bitchy moments and hilarious one liners, will they ever overcome their dislike of each other?

In full drag the three visit a bar and appear to be accepted and the other punters join in with a brilliant routine to 'I Love The Nightlife' with Shirley (Jo Shorten) giving a really laugh out loud performance. But all is not as seemed and Tick in particular is dismayed to find Priscilla (the camper van) covered in obscene homophobic graffiti and there are touching scenes as Bernadette and Adam comfort him performing 'True Colours'. With setbacks like this and then Priscilla breaking down 'I Will Survive' is a great ending to the first half.

Costumes courtesy of Charades of St Helens and BOS are colourful, outrageous, and totally over the top but wow they add so much to the show. Priscilla is quite magnificent on stage and set changes on the whole are smooth and slick. The show is supported with a full and talented band under the musical direction of Kevin Matthews.

In the second half we meet Bob the mechanic (Don Green) who has fond memories of Bernadette in her 'Les Girl' days but is married to Cynthia (Karen Gray-Thornton) Gray-Thornton gives an amazing memorable performance who should be commended for her bravery to perform wearing a basque in front of a packed theatre. When Tick finally reunites with his son there are lovely scenes as they duet with 'Always On My Mind' in which young Howson positively shines.

There is a tremendous supporting cast who deserve mention for their many song and dance routines and it really did look like fun to be on the stage.

This production from Blackpool Operatic Society is inspiring, filled with fun and laughter and amazing songs and not to be missed.

Hitch a ride with Priscilla and get your tickets now, you won't be disappointed! For Tickets and info: https://www.blackpoolgrand.co.uk/event/priscilla-queen-desert/