Being my favourite Sondheim masterpiece, I’ve eagerly awaited this particular production since last year’s Ellesmere MTC production when it was announced that this was their choice for their next production, so opening night couldn’t come quickly enough!

The story is set in London in the mid 1930’s and tells the chilling tale of Sweeney Todd’s return to Fleet Street where he meets Mrs Lovett at her pie shop, who recounts the tragic tale of his wife Lucy and daughter Johanna after falling into the hands of the evil Judge Turpin. 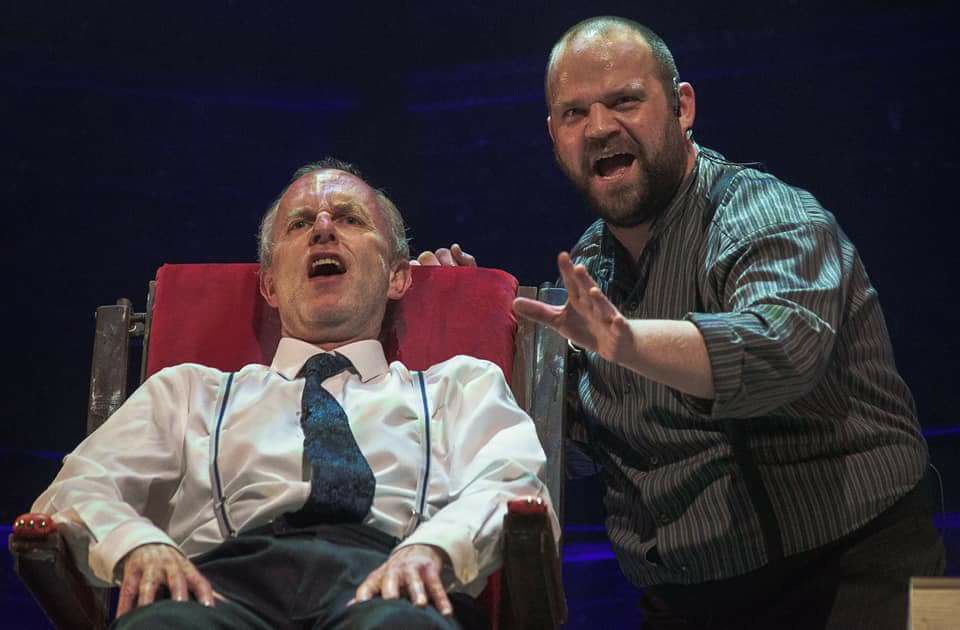 The stage set is featured mainly around the pie shop with the Barbers above it, and the filthy poverty stricken street that is Fleet Street. Being a huge fan of this particular musical, I’ve been lucky enough to see three different West End productions (Adelphi, Harrington’s Pie Shop and English National Opera), so have seen different set ups of the famous pie shop and Barbers, and tonight’s wasn’t too far from the Adelphi set up with the spectacular extra special salon chair, which aids Todd to hide the bodies of his latest victim with ease. The amount of detail that has gone into this production, particularly the complex stage set for anyone that’s seen any production of this musical before, sets it apart from other amateur productions of the musical I’ve seen (this is my third amateur production of this show, with the set being the best of the three!).

Phil Probert is every bit the demonic barber Sweeney Todd, from start to finish he delivers a chilling performance which has you gripping to the edge of your seat in fear. His vocals are amazingly powerful and where I’ve often found this particular venue hit and miss with the acoustics, I was able to hear every spoken and sung word from Phil without any issues. Whilst Louise Doody was equally enthralling as the eccentric Mrs Lovett, I particularly struggled with hearing her vocals in Act One, particularly on the opening to “The Worst Pies In London”, finding she was often drowned out by the orchestra. However by Act Two Doody’s vocals became stronger and clearer, giving a memorable performance for all the right reasons.

Regular Ellesmere MTC performer Sara Hibberd gave yet another vocally perfect performance as Johanna, but it was Ellesmere MTC newcomer Sam Widdowson that really blew me away as Johanna’s love interest, Anthony Hope. I knew as soon as I saw his face that he was a new member to the company and found something rather hypnotic and soothing about his flawless vocals. I hope Sam will be returning to perform with the Company again in future, whilst it’s great to see regular return members to the teams productions, nothing excites me more than seeing fresh new young talent.

Overall a tasty production from start to finish, by far my favourite production to date from Ellesmere Musical Theatre Company. Luckily there’s still a few remaining tickets available, so grab yours while you still can! https://www.ellesmeremtc.co.uk/current-production