The weather was awful, and I wasn't feeling particularly too well, and would have been more than content to stay home, warm and dry and to have watched a good film on the TV; but instead, I made the effort and braved the weather, and ended up at The Lyceum Theatre in Oldham. Oldham's premier Amateur Theatre Company, with their own small, but beautiful theatre in the centre of the town. I was extremely glad I did make the effort. It was definitely worth it.

The Beauty Queen Of Leenane is a very black comedy, written by Martin McDonagh and is set in the village of Leenane in Galway in the 1990s. It concerns two neighbouring families, and the entire play, bar one short scene in the second half is set in the house of Mag and Maureen Folan.

Mag is, we are given to believe, seventy years old, with several ailments including a bad back and a rather badly burnt hand, and spends most of her time sitting in her rocking chair, ordering her forty-year-old daughter Maureen about. Maureen makes her Complan, her porridge, turns the radio on and off for her, does the shopping for her, etc, etc... but receives nothing but grumbles about it from Mag. It is a relationship that is doomed (in comedic terms) from the start. Maureen, we are told is a spinster who has spent time in London, but has come back to care for her ailing mother, but longs for the time when she dies, thus freeing Maureen to live a proper life once again. However, what we are told about these characters and what the actual truth is, soon becomes very unclear. Has Maureen been discharged from an English Psychiatric hospital with a signed document to say that Mag is now her carer? Or did she simply suffer a small breakdown, unable to cope with the taunting of her English colleagues. [It is the '90s and there is very much an anti-Irish feeling in England.] What does become clear is that there is a lot of lies being told in order for the truths to be concealed, and quite early on in the play, we are given glimpses from both characters that all is not exactly what it appears to be.

The neighbouring house, at the bottom of the hill, is the Dooley's. We see the younger brother first, Ray, who is the messenger of the play, whilst the older brother Pato, becomes the love interest, and he admits that although he has spent much time away working on building sites in England, he has always had his eye on 'the Beauty Queen of Leenane', Maureen.

To say more of the plot would be unfair. The writing is undeniably superb and every sentence counts, and the twists are both comedic and tragic in equal measure just as any good black comedy should be. We laugh, and laugh out loud when in fact we really ought not to be at seeing such cruelty inflicted. And the best twist of all is left right until the very last few lines as Maureen is left alone on stage listening to her mum's favourite song on the radio.

Mag is played in this production by Maggie Blaszczok, and although we don't believe her being seventy, she does put in a really rather good performance. It just does, very occasionally border on the pantomimic or caricature, which given her character, is understandable, but I would've liked it if it'd been just that little bit more real. Her daughter Maureen is played by Ruth Blaszczok. {Could this be her real-life daughter too??} Her portrayal of this psychotic neurotic was very well placed indeed and although the clues to her true nature are given to us right at the beginning of the play, she so very rightly kept us guessing until it became obvious and there was no longer any need for guessing. Her love for, or at least need of, Pato was very believable, and her snap changes from her reality to acknowledging the truth, and back again, were delightfully real. Having some familiar knowledge of mental health issues, it was at times very close to home! 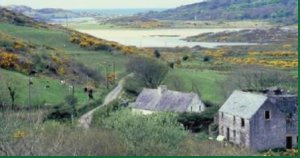 The interchanges between them both could have, for me at least, been more acerbic and cutting. Their arguments and shouting seemed a little tame, particularly when the denouement reveals the outcomes. But that being said, it might well have been the director's intention to make it more of a cosy atmosphere to lull everyone into a false sense of security.

Ray Dooley was played with a much needed burst of energy and dynamic change by Ed Taylor, and his brother, Pato was Steven Nathaniel. Both actors very convincing in their roles and I particularly liked Nathaniel's undeterred sincerity and dogged but respectful persistence.

All four had obviously worked hard at the Irish accent, since all four were near identical and sounded genuine.

Director, Ian Orry, found a nice balance between the real and the fantasy, the comedy and the tragedy, and the moments of heightened tension. The start was a little slow, and indeed the pace of the play could have been quickened a little throughout, especially by cutting down on the over-long scene changes. The red light used for Maureen's speech didn't work for me, and there was no change to the time of day behind the window. It was forever night there.

Both radio and television effects were very good. As was all the cooking and kettle boiling.

The absolute star of the show though was the set. For such a small stage, in such a small theatre, it was unbelievably good. The white-washed stone walls of a cottage with half the stage devoted to a very well designed kitchen, complete with oven, fridge, kettle, and well-stocked cupboards all with items of food from the 90's. I noticed the old style Smash tin! {A favourite from my childhood, and who could ever forget the TV advert...!} From the kitchen there was the exit through to the upstairs. On the opposite side of the stage we were shown the living room. Again, all exactly as it would be in such a bothy. A furnace, a rocking chair, lace on the occasional table, and net curtains at the window. Between the two rooms was the front entrance set back with a small porch. On the wall, just as all good Catholics would have, a large picture of Jesus. I was actually amazed by the attention to detail from the set and props designers. The programme lists a whole host of names for the set construction, but doesn't actually credit the designer which seems rather odd; and yet it credits Katie Barlow and Christine Collins for the props, but also credits Pat Lowe as the props source. (?). Oh well, whoever was responsible, then it was a damned fine set!

It has been a long time since I was last at The Lyceum theatre, and I really enjoyed my re-acquaintance with it last night. A great play and very well produced. Thank you. And finally, if anyone did notice me rushing off in rather a hurry last night, I apologise, but relying on public transport as I do, and having only one bus every hour serving my area, I needed to dash!

The Beauty Queen Of Leenane is playing at The Lyceum Theatre in Oldham until the 13th February, and it's definitely worth braving the rain for!