The Quays Theatre at the Lowry plays host for three evenings this week to dance groups from all over the city of Salford in a celebration of the city's young dancing talent.

I was there last night to see the first 10 groups perform. The first of three different evenings - there are so many groups wanting to participate in this event that every evening sees a completely different programme from 10 more Salford dance groups.

I really enjoy events like this. First, they promote youth and child talent. Second, they also promote a friendly and non-competitive atmosphere. Third, they give many youngsters an opportunity to perform on a large and professional stage. Fourth, they are all-inclusive. No dance group is barred from performing, no child not given the opportunity to perform. All are welcome in equal measure. And fifth, it's a massive and necessary learning curve for any of the dancers if they are wanting to make the transition from hobby to profession.

Of course there are negatives to events such as these too. The most major being that no matter how well-organised and coordinated it is, and no matter how it is managed, it still becomes a show for the families and friends, and somehow becomes too cosy. There was not enough room for all the dancers backstage and so half of them took seats in the auditorium, in costume, and were allowed to mingle with their parents and friends during the interval. It all takes the edge of what really ought to have been a professionally produced evening. {I do realise there was no alternative due to space restrictions and legal requirements backstage}. It's hard to describe, but despite performing on the Lowry's stage, it still seemed too familiar. They needed an outside audience, members of the general public. And for an event such as this I doubt many if any would attend, which is a real pity. I have been an adjudicator in the Musical Theatre Dance category at many National Dancing Competitions over the years, and the atmosphere is just the same. Well no, there is one difference. At competition level there is also that air of negativity, one school being better than another school etc - which thankfully was not present at all last night. Last night was a joyous occasion; a celebration; an explosion of dance! 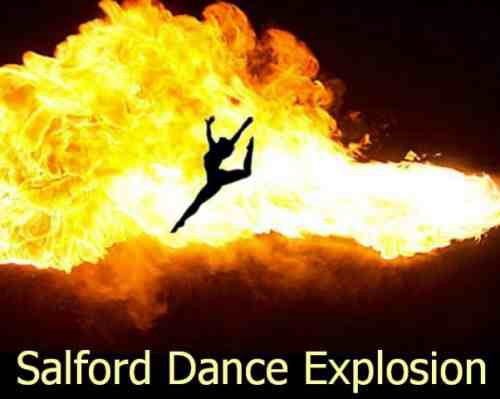 All three evenings are given over in equal measure to 5 private dancing schools and to 5 after-school dance clubs of mainstream primary and secondary schools. This too is a lovely idea and makes the events much more inclusive and fair.

It goes without saying that of course some dances and dancers were better than others, but I was not there to judge. Importantly neither was anyone else. We were all there to support and encourage, which we did equally to all groups. I was also struck last night by just exactly how much talent was on display. I am a Musical Theatre aficionado and so those numbers last night which had a bias to the stage obviously pleased me more, but being totally honest, I enjoyed every item on the programme and found the standard, especially in the second half, much better than I had anticipated.

The evening was compered by Carolyn May, who also sang 'I Am What I Am' from La Cage Aux Folles to open the second half. A lovely voice, but a rather odd choice of song. [The song having been quite rightly taken over by the Gay community as their 'anthem'. It was written to be sung by a homosexual, in a show about sexual diversity set in a Gay Night Club on the south coast of France.]

Ms. May did however provide us with some rather interesting snippets of information which were not included in the programme, and so I will endeavour to enlighten you here, but if the information is incorrect then please forgive me!

1. Eleven of the dancers from Danceworks have been chosen to perform at The Dance World Cup in Jersey in June. Massive congratulations and good luck!

2. As part of the Joanne Farnell presentation, one of the girls sang a solo whilst the other girls danced. The song was Mein Herr from Cabaret, and the singer with a beautiful voice, (I hope I get this right) Emily Snooke.

3. I am not sure what this means but it seemed important. The final group to perform from Walkden High School who danced a lovely jazz version of 'Fever' were 'Junior Gifted Enabled'. It doesn't make any sense to me but hopefully someone will understand that phrase!

Also part of the entertainment on offer each evening is music from a Salford duo who call themselves Radio Impulse. One plays the guitar and both sing. They performed cover versions of popular chart hits and sang a couple of original songs too. I remember one of these which I quite liked. I think it was called 'Take A Minute'. They sang at the start as the audience were arriving, again just before the interval, and then one song at the end with all the dance groups either on stage or standing in their seats.

Again, I hope I have written this down correctly, these two young men have recently made a record for Key 103 'Cash For Kids' and last October were awarded with a Community Heroes Award.

The whole event is organised and coordinated by Karen Acton. It is one massive undertaking and I'm not sure how she manages it, so a huge thank you to her for her efforts and success. I am looking forward already to next year, when maybe I will have time to make all the nights and not just one. Have fun tonight and tomorrow and thanks for showing us that Salford's Got Talent!!