Presented by the University Of Manchester Musical Theatre Society in yet another theatre space on Oxford Road in Manchester, and one I had until last night never been to; The Council Chambers in the Students' Union Building.

The room was not used as a conventional theatre though. For this production, the band were placed on the stage, with the auditorium split in half lengthways. One half given over to audience and the other to the performance space, making it a very long and narrow stage. The left part of this stage being set out with a couple of rows of chairs for the 'contestants', and the right side with a desk and a couple of chairs for the 'judges'. Central was a single mic. Behind, on the wall, pictures and artwork of Primary School children and an American flag. We were in a school hall somewhere in the States (Putnam County), and we were gathered to witness the county finals of that very American competition, a spelling test. (Bee).

The acting was first rate. A very talented and high-energy cast who all had clearly defined caricatures and personalities, and in the context of this Musical, they worked wonderfully. The singing was generally very good too. Some of you had a little difficulty though with even the simplest of dance steps! (That was a shame!)

For me the most sincere and instantly likeable character on stage last night was Mitch, played by Joe Dickens. With fully-tattooed arms, sunglasses and vodka-drinking, he proved that 'less is more' by just sitting on his chair and 'being'. And when it came time for him to shine in his wonderful solo, proved also that he had a lovely voice and great personality. Eimear Crealey as Olive and Jack Hawkins as Barfee were also extremely good. The most unlikely two people to be winner and runner-up and the most unlikely of people to fall in love. Both performances were well-measured and sung to perfection. 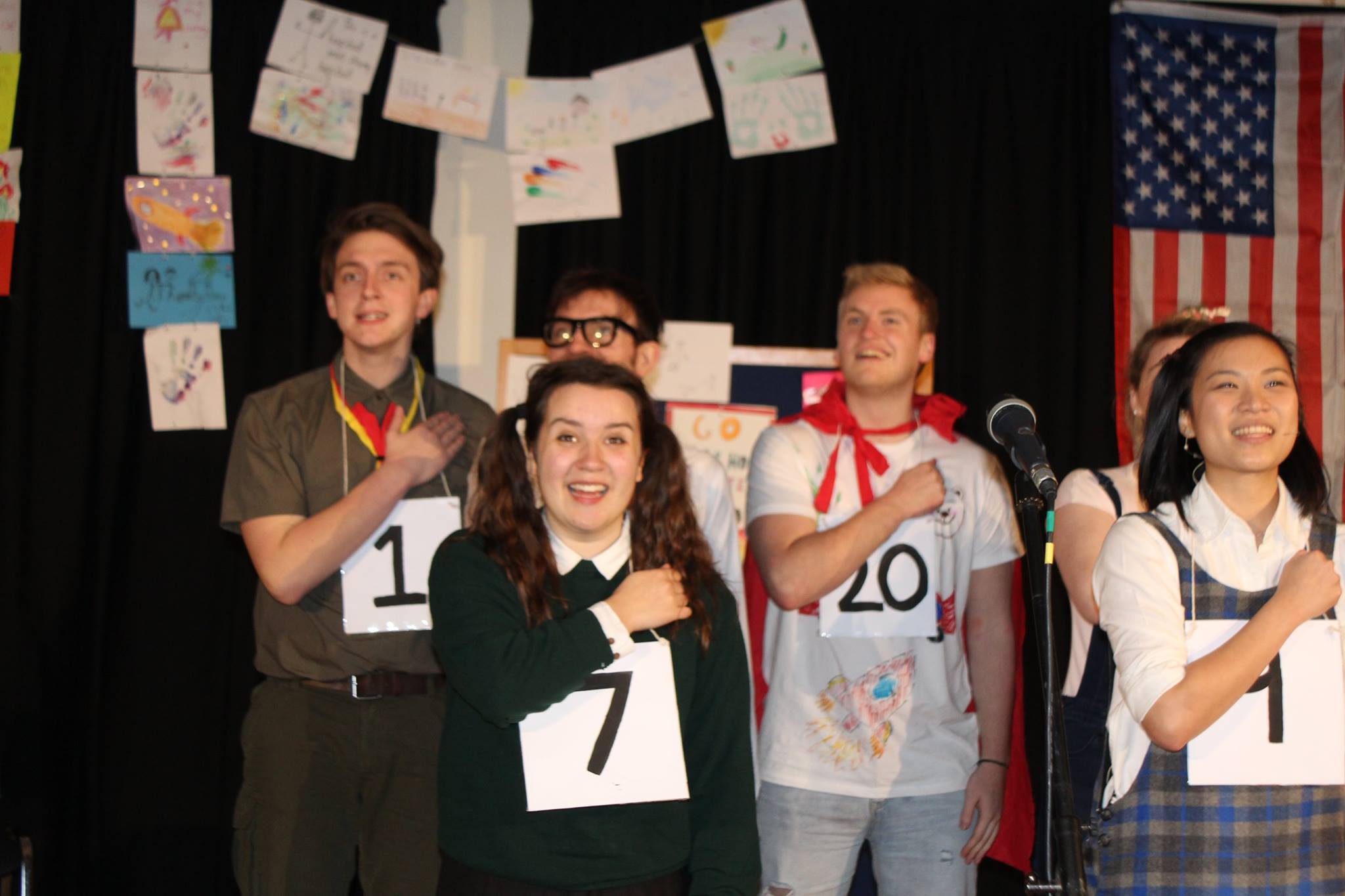 However, I had a couple of problems with the directing / producing of this performance sadly. First of all, none of the cast even attempted an American accent. It was all spoken in British accents, but using American dialogue and idioms! The humour in the text comes from Middle White America, and their xenophobic attitude towards anything that isn't like them! - Mexicans, Mormons, etc. [even the names of the spellers are deliberate and ‘jokes’]. This doesn't sit well with me, unless it is sent up and parodied. And you can only do that if you are American - not British!

The second issue I have was with the microphones and amplification in general. The room was quite small, and so we should have been able to hear everything the cast said without the need for mics. However, for some reason, that was not the case. Unless they were standing directly in front of me, I had great difficulty in hearing. Once the band started to play, and they were mic'd, and I was sitting very close to a speaker, so unless the singer was mic'd too, again, I was lost. Two of the cast were wearing head sets. The others weren't and had to either rely on their own power or the microphone front centre. All of this made for a very off-putting mix of sound levels and impaired my experience and understanding.

Thirdly, the two judges should have been middle-aged. (I assume). No attempt was made to even try to make them look or act any older than their tender twenty-something years.

This is an Off-Broadway Show which in my mind should have stayed there. UMMTS made a very good attempt at it, and all credit to them for so doing. The Music was excellent, (Aine Mallon), as were the costumes (Grace Griffiths). But the show is an American show, with American humour, and the personalities and characters of the spellers are stereotypical Americans with stereotypical 'issues' caricatured in every US teen comedy ever written! The music belongs Off-Broadway too. The whole style of show - even down to using audience members as extra spellers and creating ad-libbed humour from them is a very American concept. This is possibly also one of the reasons why this show will always stay on the Fringe circuit. It’s fine to have audience members participate in an Amateur / Student / Fringe theatre production, but it wouldn't work on the West End! [But it DOES work Off-Broadway!]