This amateur performance by members of Zodiac, a Cheshire based amateur musical theatre society (ZAOS) is set in the 70’s disco days and tells the story of Roddy O’Neil, the local lothario, superbly played by Anthony Farrell growing up in a world of ridiculous fashion,(did we really wear clothes like that?) The music and hits which are now iconic, the loves and lives of family and friends the hopes and dreams of the young.

Before the musical even starts you know it’s going to be fun as you take your seats and on stage are a few members of the cast, on the set of a disco, with a bartender, DJ and the cleaner mopping the floors not forgetting the bouncer wandering around the audience, the audacity of wanting to search my handbag! And throwing in some comic moments.

The opening scenes are based in the disco and a wedding reception is taking place, perfect timing for a rendition of’ ’Celebration ‘featuring the whole cast. It is obvious that a lot of hard work has gone into the dancing as it is performed effortlessly and energetically and is credited to choreographer Kriss Hubbard’s belief in each member and has certainly paid off with his first time with this show.

Roddy’s girlfriend Debs, (Nicola Holland), is pregnant and is fearful of his reaction. The story tells of her attempts to tell him, her friends and his friends’ reactions and the eventual outcome. 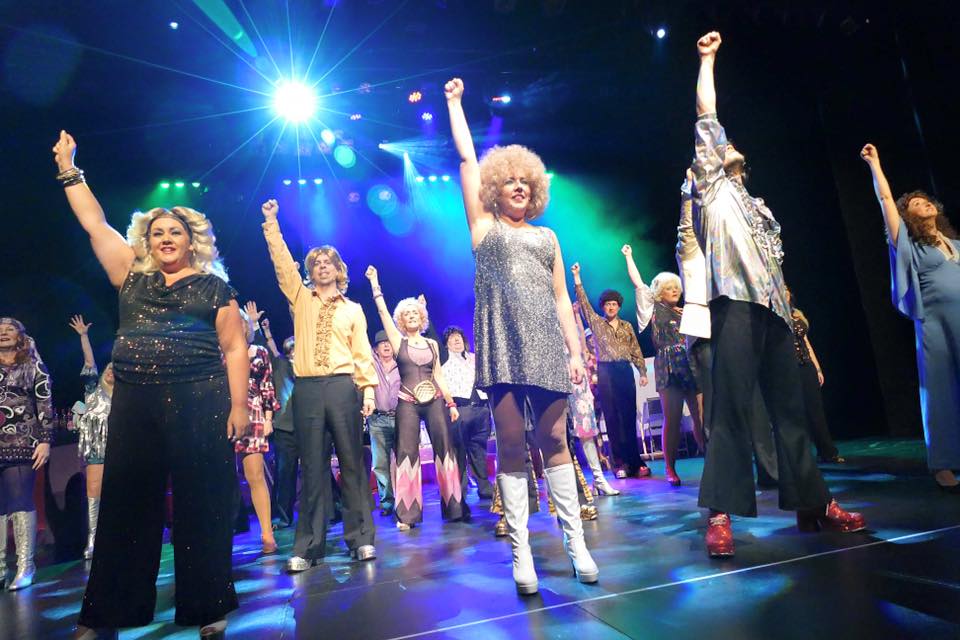 Interspersed with scenes of home life and the cinema with simple but effective sets and 70’s props with a genuine chopper bike, you can’t help but be taken back to that decade.

Whilst a vocal talent may not have been everyone’s strongest point it simply did not matter….. The acting and dancing and portrayal of their characters took over. Casting of Rachel Kirkbride as Lorraine, the clubs singer, was probably the wisest move as she did have the best vocal range. I loved the classic ‘Sugar Baby Love ‘ song scene at the local flea pit, hilariously acted out by Chris Doyle as Terry, who gives a brilliant performance for the whole musical with his futile attempts of seducing Trish (Emma Humphreys) who also gave a creditable performance. Little touches such as the theme from Jaws being played bring back memories.

Our DJ of the Boogie Nights Disco, Dean (Aaron Cawley) acts the part out well as does Spencer (Kortez Lopez) Lorraine’s boyfriend/manager. Loved the ‘Shaft’ moments. Eamon, (Mike Kelsall) Roddy’s father is a big Elvis fan and heavy drinker but can certainly hold a note and his Elvis’s ‘Always on my mind’ was plausible. He gave a brilliant performance with comedy and sadness and a parent’s frustrations and difficulties with their offspring.

Featuring the entire cast on several occasions with hits of Kung Fu Fighting, Happy Days a version of YMCA or was that CYMA? and of course Boogie Nights to name a few, the audience is singing along and there is a general feel good atmosphere in the theatre.

The main characters of the night are Debs and Roddy who both acted and sang their hearts out with their performances. Farrell has an exceptional likeable personality and inter connects with the audience from the start, definitely one to watch out for in the future.

Mastering the balancing on the platform shoes and boots and on top of that be expected to dance in them cannot have been an easy challenge but there was not a single stumble so well done to you all. The costumes and wigs brought back memories, I really did have a wardrobe consisting of those outrageous outfits! My husband wondered where the shoes were obtained from and worryingly says he misses his platforms. May the 70’s fashion never return is all I can say! But the music will live on forever.

Set at the back of the stage, the four afro wig clad band members should not be forgotten for their musical talents this evening. Shame we didn’t get to see you at the end as you were obscured by the smoke!

I thoroughly enjoyed Boogie Nights and it is a credit to the dedication of the cast and production team of Zodiac and I cannot wait for their return with the musical Hot Flush in October.

Showing until 12th March 2016 Tickets for further performances are available on https://tickets.thebrindley.org.uk/en-GB/shows/boogie%20nights/events