The King And I - Oldham Coliseum

Presented by Ashton-under-Lyne Operatic Society, The King And I, based on the book, 'Anna And The King Of Siam ' by Margaret Landon, based in turn upon the true story of Anna Crawford being hired as governess and teacher to King Monghut of Siam, was a colourful production very faithful and true to composers Rodgers' and Hammerstein's writing, immersing us in the culture and traditions of Siam (Thailand) of the 1860s.

Rarely performed these days, along with similar Musicals such as South Pacific or Flower Drum Song, since they are likely to cause some degree of racial stereotyping and in this PC world in which we live could easily cause offence. However, full marks and massive kudos to anyone who is brave enough to produce these shows - they are wonderful shows and fine examples of the golden age of Musical Theatre, when a Musical was a joyous celebration of song, dance, acting and spectacle. There was a libretto - or in other words, a play script - and although mostly quite banal dialogue and just a plot contrivance to bring the character to another song, still requires to be well acted; there was nearly always a ballet where the dancers were allowed to show off, and of course, no Musical would be complete without fantastic costumes and sets.

It is a very long time since I last saw a production of this Musical, and I had forgotten just exactly how both tragic and racist it actually is. With most Musicals there is a happy ending, a wedding celebration or a full company toe-tapping tap dance routine to send us all out of the theatre smiling and happy. Not here. Here the final scene is one of heavy dialogue, music underscore, and the death of the protagonist, and as the curtain closes all mourn his passing. We also see his 'barbaric' side earlier in the show, as he prepares to whip one of his concubines for trying to escape and elope with her lover, whom he has put to death. But it is not these actions which are the most shocking. No. Actually the 'joke' is on us. We the English are the ones who are being racially mocked. There are so many references to this throughout the Musical I simply cannot list all, but my favourite is the wearing of such elaborate and shape-obscuring dresses with many undergarments, and yet baring décolletage (off the shoulder) is acceptable. (Sadly the dress Anna wore for this little scene did not bare the shoulders, but the point was nevertheless relevant). But it is the Victorian mentality of 'if they are not like us then they are barbaric and should be subjugated' which really hits home hard, and in this regard, no punches were pulled last night at all. The highly stereotypical Sir Edward Ramsey and the threat that The British Empire, who already own swathes of the East, will simply come in and conquer because they find Siam to be a 'barbaric' nation was certainly not underplayed. - Nor should it have been.

The set was certainly colourful and the space well used. I need to do a little more research into this before I am able to write with impunity but I am pretty sure the Buddha figure at the rear of the stage was not a Siamese (Thai) representation of him. All the ones I have seen from this part of the world have had pointed helmets - like the one the young Buddha wore in the ballet. I also think that for a set such as the one you used, one set for all scenes, then the omnipresent and omnipotent Buddha should have been a statue rather than a cardboard cut-out. The gong was Japanese. (Thai gongs are similar but without the pagoda style decoration at the ends of the top wooden bar), and the lanterns and dancing ribbons used in act 2 were Chinese. The lanterns even had Chinese writing on for goodness' sake! I really liked the front side flats though. The golden panels were much more authentic looking and provoked the correct image. 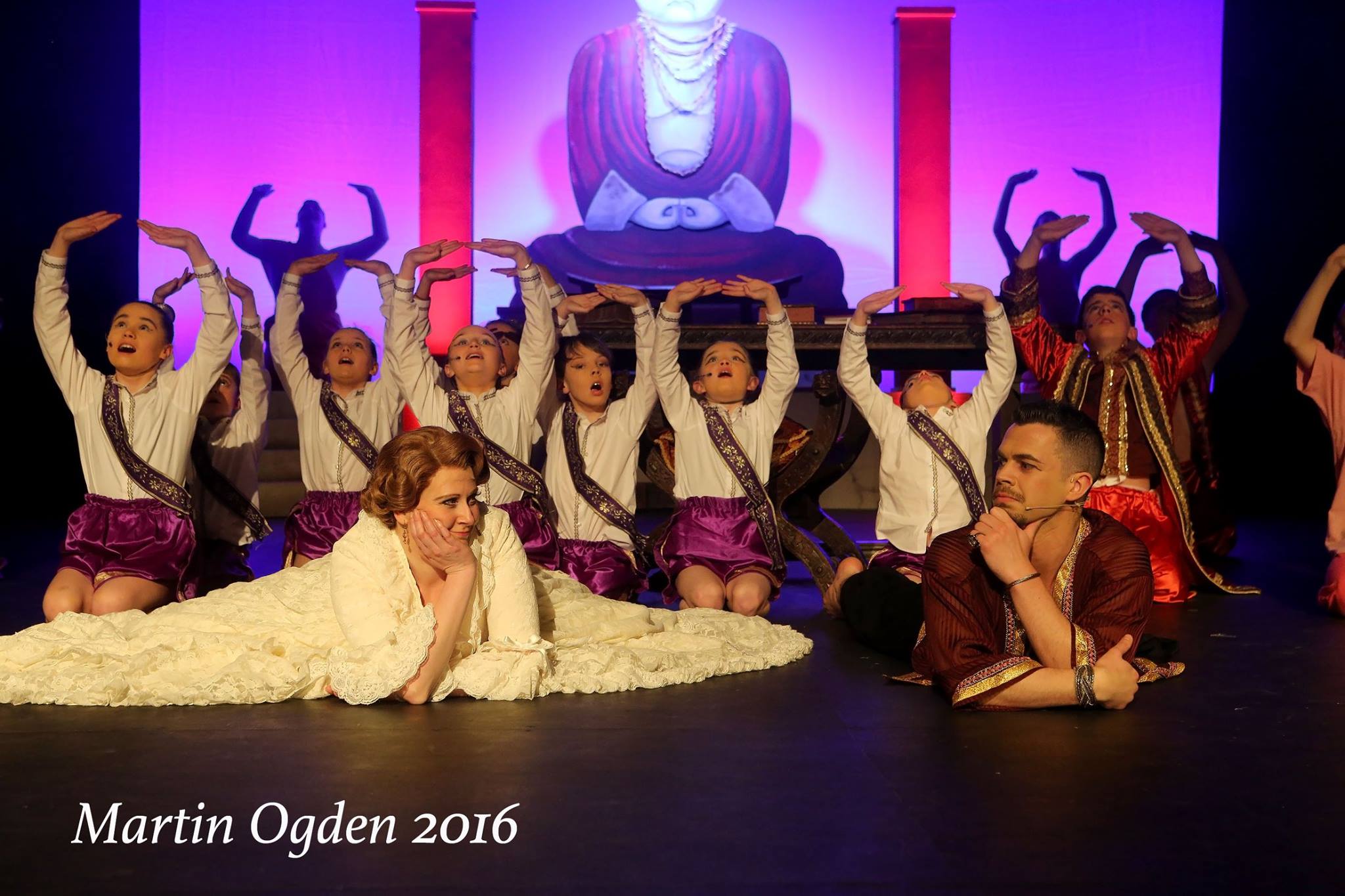 Going back to the idea of having just one multi-purpose set. It was an interesting idea, and one which actually with a lot more thought could have worked and worked well. However, there were two very large problems with this the way it was presented last night. The first problem stems from the fact that in order to change the scene, white trellis ornamental screens were brought in and out in an attempt to mask the change. They did not do this since we could see through them and they weren't large enough in any case - especially when the King walks on with is own bed sheet in full view of the audience to get into bed behind the screen. Further, if this is to work, then the changes need to be smoother and the stage crew not bump into other parts of the set! However, all of that pales into insignificance when looking at the screens. They were of European design. These screens screamed at me and were totally out of place in the palace of the Siamese King!

The set was not a composite set - i.e., one set that can be used for all scenes - but was most definitely a single set, that of the palace interior. No attempt was made at the beginning to try and create on board ship and a landing stage, and various other scenes throughout suffered greatly from their being placed in the midst of this set which was visible the whole time. Even a simple spot covering a small area with the rest of the stage in darkness would have been preferable. The star curtain came in very handy for the evening outdoor scenes but there was still too much interior to be seen.

The LX was a little shaky at times, and the spot operators weren't sure when and where to light which was off-putting. But maybe they'll know for the rest of the run now. Props and costumes on the whole were good. Some chorus members were wearing leotards which were more than visible, covered only on the top by a sash, which looked totally out of place, and the new map just sent over from England was a child's drawing and also quite laughable. The costumes used for Uncle Tom's ballet though were really stunning, and Anna's dresses were good too.

The acting, on the whole, was of a high standard. Anna, {Sarah Thewlis} gave a wonderfully real interpretation of this role showing truthful emotions and I enjoyed her singing very much too. Playing opposite her was The King {Sam Maurice} whose accent was somewhat shaky last night - it kept shifting around a little - but his acting ability and characterisation of this role was not in question. He understood the role and he nailed it. Lady Thiang {Elizabeth Phillips} was the most impressive supporting role, again with very truthful acting and such a beautiful singing voice.

The two youngsters, Anna's son, Louis {Riccardo Atherton} and The King's number 1 son, Prince Chulalongkorn {Zach Atkinson} both impressed me with their stage presence and ability.

As I have already said, then the directing, by Michael James McCaw, was certainly being truthful to the writers, which is, although often forgotten or overlooked, the director's primary responsibility. His work with character and characterisations was good and he managed to build a nice progression in the relationship between Anna and the King. The first few scenes though were rather sluggish and it took a while for things to warm up. There was no tension created with Anna's meeting of The Kralahome on the dock side for example, and the dialogue simply didn't sparkle and tensions were not really built until much later in the first act; in fact, it was when the King entered the schoolroom to tell his children off. Uncle Tom's ballet was excellently choreographed and performed, [choreography by Jean Johnson] and the final sequence of the dying King was extremely touching and superbly directed and acted. I would have preferred though for there to have been some hint before this scene that the King was unwell. His transition from healthy and potent ruler to bed-ridden and at death's door was too quick to be believable.

I appreciated the fact there was a decent sized band, and despite the odd 'bumpf' note or so, they played well, under the direction of Paul Firth. They were just a little too loud when they played under dialogue, especially their crescendo finish as the two boys are talking (Puzzlement Reprise).

This is a very traditional show and highly entertaining. High production values, a strong cast and a truly excellent bunch of Siamese children must surely make this another production the society will be able to look back on with fond memories.

The show runs at Oldham's Coliseum Theatre until Saturday and tickets can be purchased from the Coliseum's box office. Get them quickly - they're going fast!