The Jewish Theatre Company (amateur) present this extremely lively and highly satirical parody of Broadway Theatrical Producers during what could be described as the Golden Age of Broadway in the 50s and 60s.

First of all came a film in 1968, which starred Zero Mostel and Gene Wilder, then, years later, the stage Musical, and then in 2005, another film version from the Musical this time starring Matthew Broderick, Nathan Lane an Uma Thurman. It is now 2016 and interest in and affection for this absolute genius piece of writing by Mel Brooks has certainly not diminished.

Mel Brooks was a man who was certainly not afraid to put himself and his work on the front line; with his masterly mixture of parody, satire and comedy genius, alongside his unabashed ability at self-mockery have made his work so durable and fresh.

The story, as if you don't know the storyline!, follows a down-on-his-luck and slightly corrupt producer Max Bialystock, reduced now to seducing little old rich ladies in order to finance his projects. Enter Leon Bloom, accountant, and after finding a large discrepancy in Bialystock's books, makes an off-the-cuff remark that one could actually make more money by producing a guaranteed flop, than by trying for a success. Bialystock ropes Bloom in - it doesn't take much convincing since he always wanted to be a Broadway producer anyway! - And the two set about finding the biggest sure-fire flop through a pile of scripts. They find it - a Musical Romp glorifying and adulating Adolf Hitler entitled 'Springtime For Hitler'. It is the most offensive play ever; how could it possibly not be a flop. After convincing the author of the play - a neo-nazi from Bavaria living in New York - they find the outrageous and overtly gay director Roger DeBris and a cast of no-hopers - including casting the writer himself as Hitler - and the two sit back and wait for the curtain to fall for the first and last time before coining in their ill-gotten gains and retiring in Rio. Of course the audience love the show - they see it as satire and parody - (the irony of this!) - And so Bialystock and Bloom are sent to prison. However, whilst in prison they set up a similar scam with the guards and prisoners and start work on a new Musical before being released.

The production by The Jewish Theatre Company was played very much for laughs. That was both its saviour and its downfall. Brooks' characters are well grounded and based on reality and truth. The comedy coming from a real place - an exaggeration of a real gesture, an exaggeration of a real voice etc. I felt though that with this interpretation, many of the characters already had as their starting point the caricature, and so when they exaggerated their behaviour and mannerism they became too OTT and therefore became a parody of a parody. However, the actor's themselves cannot be blamed for this. This is all down to how the show is directed and in this production the director was Robert Margolis. Toned down even only slightly and the whole evening would have been extremely enjoyable and much more 'real'. 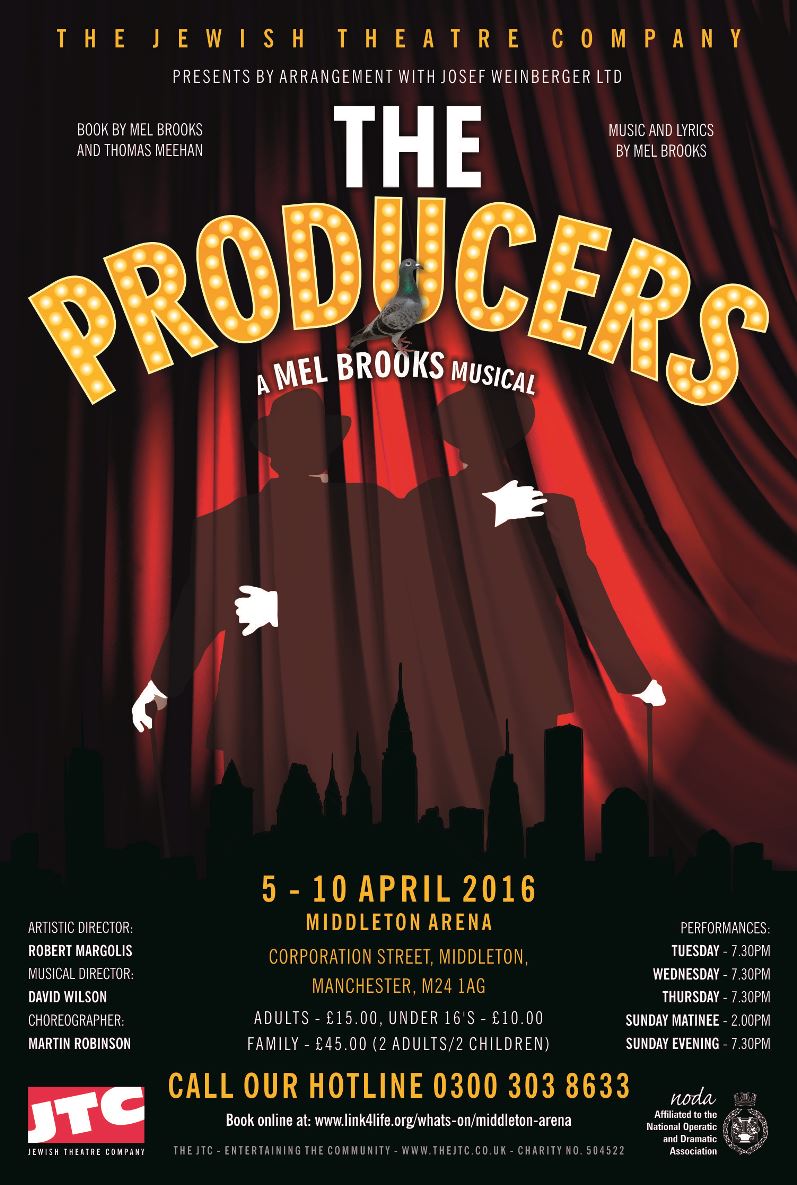 Fortunately the two protagonists Max Bialystock {Jeremy Kay} and Leo Bloom {Dean Simons} were not guilty of this. In fact I really liked Kay's interpretation of the role and proved to be a truly great all-rounder. His acting, and his NY Jewish accent, consistent, a powerful and sonorous singing voice and capable dancer. A great sense of comic timing, and knew when to have fun with the role and when to play it seriously. Simons' almost autistic
interpretation of Bloom was a little strained at first - and his rant over his comfort towel too much too soon (if you noticed none of the audience laughed at this) - but once he got into his stride and became a more real person, he became immensely likeable and the perfect partner for the double-act; again proving that he too was a true all-rounder.

Supporting these two saw Debbie Hilton as a Swedish 'actress' who came to audition for the producers and ends up getting a lot more than she bargained for, even ending up marrying Bloom. Her Swedish accent was inconsistent, especially during her singing, but she was a very proficient performer and worked well with the two producers. I have to admit though that I found it really quite odd that her character is obviously much more of an 'exotic dancer' rather than an actress, and her song is clearly a strip-tease and seduction rather than anything else, and yet, during this song she was more clothed than she was when appearing in the Springtime For Hitler section.

Howard Jaffe played the openly gay, dressed in a dress, Broadway director Roger DeBris, who ends up by default, performing the role of Hitler himself after the writer literally breaks a leg. This was a nice interpretation and a good balance between being rooted in reality and living with the fairies was struck, it was his sidekick lover and his 'team' which really irritated me. His PA, in every sense of the word, Carmen Ghia, was played by Michael Shnek, and it is here where the boundary lines had been crossed. There was sadly nothing in Shnek's interpretation which I found to be true. It was a parody of a parody, which most of the audience found funny, but sadly it came across, in 2016, as mildly offensive and ridiculous. It was a send-up of a send-up of a character that has already been sent up. And worse than this was the visual gag of having a huge penis in the ballet dancer team member. It added nothing to the show, just to his tights.

However, I leave the worst until last. Matt Mikler was a very shouty, loud and completely unreal caricature of Franz Leibkind. Sadly there was nothing in his interpretation that I could hold on to as being grounded in reality at all, and he shouted a lot, even when he wasn't supposed to be shouting, he shouted. This is a real shame since it is quite a pivotal role and although a cameo and actually quite a fun part, Mikler was unable to find the humour in the role, and instead shouted his way through it.

In an even smaller, but no less important a part, was Richard Basker, looking very much like Christopher Plummer, except in a Nazi Stormtrooper's uniform, proved to be a very pleasant and personable opening singer in the Springtime For Hitler routine.

As already mentioned the show was directed by Robert Margolis very much for laughs. It was a swift, fast-moving and energetic show, which I found really quite superficial. Only Kay finding real depth in Bialystock, while others content to play only the one dimension of their characters. Fortunately the genius of Brooks' writing means that even playing just the one dimension gets you laughs and audience appreciation.

I really liked all the costumes. All looked good and in period, and even the props of Variety Magazine and wheelchair were authentic. Such a shame then that the zimmer frames were all far too modern. And the plaster on Leibkind's legs was unfortunately nothing short of laughable. It didn't even look like plaster, and was so flexible he even sat down on the sofa with two broken legs. (If this was a directorial joke then it didn't work).

The set could have been very good indeed. I liked the IDEA of the set, but it just didn't work in practice for two reasons. First, it was far too flimsy and insubstantial. Watching a wall waft in a draft and a prison wall wobble when leant on might have been a directorial idea to get yet another (cheap) laugh - but I seriously hope not and doubt it. And secondly, most of the sets were placed too near the apron front meaning that chorus scenes, especially the opening songs, were extremely cramped. Further, the changes weren't executed quickly enough. We were only shown the full extent of the stage during the Springtime For Hitler sequence when, even with the Nazi Youth Chorus and Brunhilde with her three German 'foods' still had plenty of stage to spare.

The musical direction, by David Wilson, was first rate. A large band who played exceedingly well and never too loudly, were kept under a firm and proficient reign. All the songs were very well sung and I particularly liked the chorus singing.

Choreography, by Martin Robinson, was also of a good standard. I really liked the idea of giving those who could manage it something a little more adventurous, whilst giving only simple movement to those less able or confident. The swastika created in the Springtime sequence was a lovely idea - a Busby and Berkeley throw-back - but would only have worked if viewed from above. The stage was not raked and the audience was not particularly high up.

The lighting and sound were generally OK. The only effect that really disturbed me was the purple spots at the very end when Bialystock and Bloom sing their finale and walk off into the horizon, they were covered in purple circles from 6 lamps above them. Very odd and very distracting.

It is very easy to see how a show such as this - one that draws it's humour from ridiculous accents, caricature, homosexuality, Nazis, and theatrical in-jokes - can easily descend into the realms of superficiality and become completely over-the-top. However, trusting in the genius of the writing and grounding everything in reality makes for a superb and highly entertaining (even if it is still slightly offensive) production. I would say then, as a summing up, that this is basically where this production fell down. The director allowed some of the cast to base their performances on the caricature rather than the character, and went for cheap laughs without really finding the verity and progeny of that laugh.

It was, nevertheless, a very enjoyable and highly camp romp, and played very much tongue-in-cheek; which gained a standing ovation (from an audience made up almost entirely of family and friends). It is a high-energy, feel-good, (almost)-family show and runs at Middleton Arena until Saturday.