Cardinal Newman College presents the incredibly inventive Game Of Gnomes: A Mirthical Musical. Based lovingly on the hugely popular Game of Thrones, it combines the hit TV show with brilliant all singing and dancing gnomes!

The very unique story was at times confusing and unnecessary but did seem to work with well with the actors and music. At its simplest, it's a community of Goblins who are looking to take over the Gnomes for their castle and to rule the whole of the garden! Through all there trials and tribulations all they want have I make a better life and not be the congregation to be forgotten about, plus a great selection of the battles and ballads! It should be noted of the ambitious project this musical was, not only to put on a full scale music but also an original production, so big congratulations to be putting on this show!

An enormous ironstone arch stood in the middle of the stage and from the beginning of the piece the set was a very creative idea and did a good job of filling scene changes and keeping the audience aware of the surroundings and location. It was wonderful to hear a talented 11 piece band that brought a wonderful element to the production. The only problem however being that they were incredibly loud, I always am a lover of a band playing at full volume but it was extremely difficult to hear any of the performers on stage once a song would start playing. 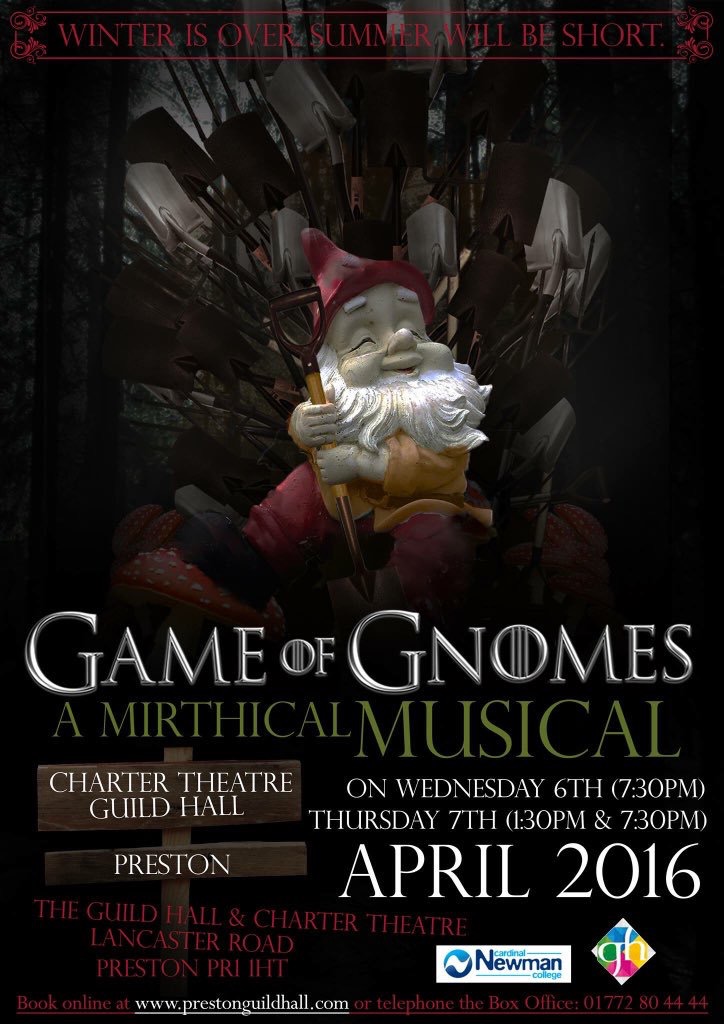 This also had a knock on effect where the performers themselves would be screaming (not singing) down the microphone, just to be heard. A lovely detail of making the microphones out of swords worked terrifically and made the piece very true to its source material.

All performers who were part of this musical gave 100% dedication and passion into the show from start to finish.

Every actor, singer, dancer and musician should be very proud of their involvement in this production. There were a particular few that shone; especially Helen Aylcott who played the wonderful Compost who played Lady of the Goblins, Aylcott was not only a spectacular singer as my jaw did drop once I heard her, but also was a fantastic character actress and stayed in character throughout the entire performance. Additionally, Ed Shears was performed by the hilarious Nathan Ousby, he had the greatest physical acting ability and had a walk or the similarity of Charlie Chaplin. Finally, Oliver Dunkley played many roles and even sometimes a more narration role but was published as playing The King Kobolds. He is also a fantastic character actor and also had great protection when speaking and even, to top it all off, was a brilliant and adaptable dancer.

The show as a whole was a terrific and enormous challenge, but certainly did not detour the very talented performer I had the pleasure of witnessing in an utterly unique musical. I am certain members of the company will excel in the future and I wish them all the best of luck! Game of Gnomes is a fantastic production that had been tremendously produced by all involved. From the set builder to the poster designer, costume designer to the vocal coach everyone involved should be thrilled.