Last night, Last night, New York came to Stoke Last night. The Stoke Rep was transported to 1950’s New York last night as Stoke Youth Musical Theatre Company gave us a performance of West Side Story. The show opened with some of the best theatrical choreography I’ve seen in a very long time, the choreography was provided by Olivia Birkin and the dances throughout were executed with such attack and energy that we as the audience could have quite easily be been watching a professional performance of the show. Two standout dancers in the show were Charlie Stubbs and Sadie Gardner the stage presence these two have could rival many professional dancers in West End shows. However every dancer on the stage could have been professional. The dancing from start to finish was simply incredible no one dancer showed any signs of slowing. The only downside as the stage wasn’t big enough for some of the dances which did account to a few bumps between dancers this didn’t affect the show at all it was just a massive shame. But we will call it opening night nerves and I’d love to watch it’s completely sold out and quite rightly so this show is not to be missed.

Two show stealing performances came from Maya Tudor and Emily Di-Silvestro who played Maria and Anita. Tudor as Maria was the absolute embodiment of the character and her vocals were flawless she was the perfect casting for this role and wouldn’t be surprised if in ten years she was playing Maria in the West End she is definitely one to watch! Di-Silvestro should be professional right now she is in a word incredible. The girl could do no wrong as the character and give her 5 years she should be smashing every west end role possible. The two of them worked together and the relationship of the caring sister in law and younger sister came across perfectly a massive round of applause to the two of them and I look forward to seeing them both in future shows professional or not. 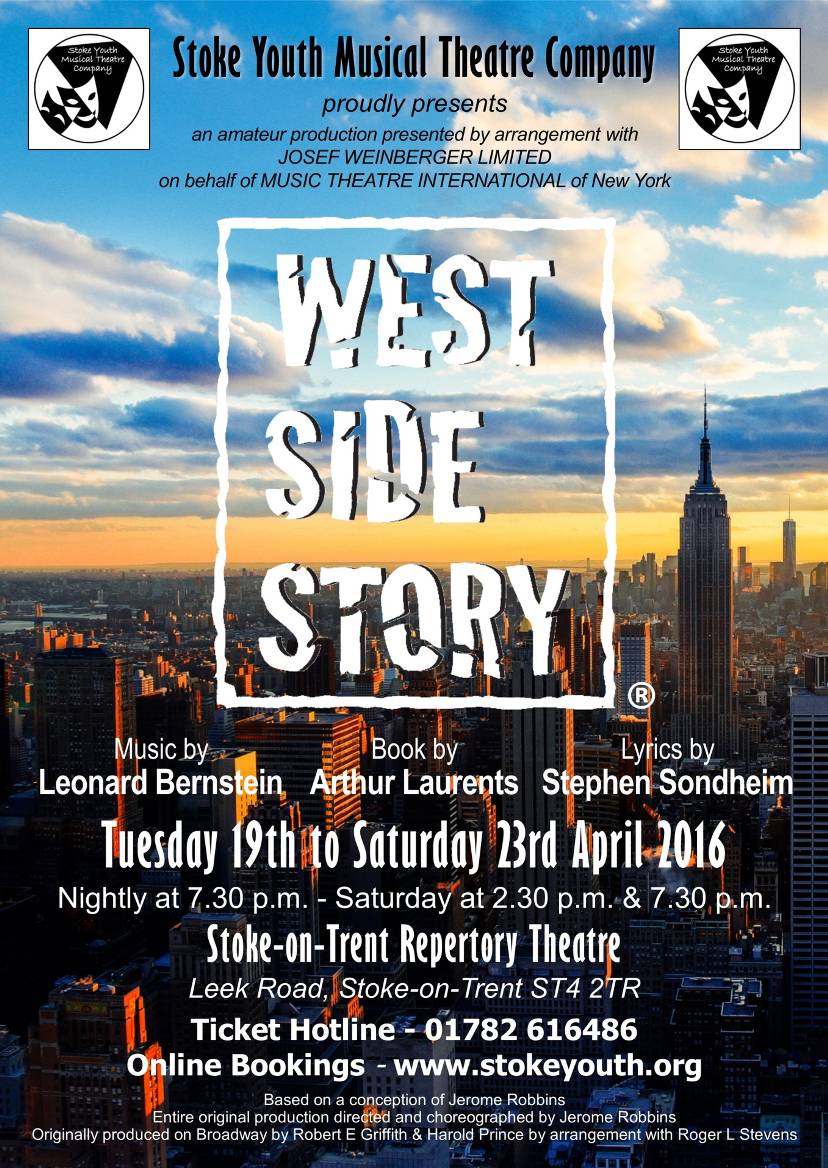 However, the boys in this production were mesmerising never have I seen such talent especially from youth boys. You could throw anyone of these boys onto a professional stage and they wouldn’t look lost. Gee Officer Krupke was a standout moment of the show it was the comedy relief needed in the show and was given every possible thing it could have been I also applaud the boys who all did a push up on top of each other for the length of time they did because honestly I can’t even do one so I massively take my hat off to you to be able to hold it for so long in one of the most complex pieces of choreography I have seen. Every Jet on that stage was incredible it’s amazing to see so many young lads from stoke with such a passion for theatre and even better to see them excel in such a hard show as this and every shark could have easily rivalled the jets. Max Birkin as Riff was every inch as cool as the character should be and had the dominance needed for the character and still had that relaxed stance making him the perfect leader of the Jets he was rivalled by Joe Readman as Bernardo who perfectly portrayed the caring older brother/boyfriend but also the vicious leader of the Sharks this was a brilliant performance and the fight scene between Birkin and Readman was choreographed and executed remarkably.

Joe Matthews as Tony was a lovely performance. He was ever the heart throb and it was so sweet too see the love blossom between the two of them. They portrayed this instant love perfectly and I applaud the director for every point surrounding these two as the audience was eating out of their hands. I feel the pair couldn’t do any wrong. There were a few adults in the show who played Doc and the inspector both were portrayed brilliantly.

The set was simple yet effective, however some of the scene changes were slightly lengthy as an audience. But that will be something that will improve over the week I’m sure. I did however love the use of the scaffolding and thought this was the best way to set the show. The music was brilliantly performed throughout my only gripe is I was sat on the very back row and a few locals were lost due to the volume of the music at points but that was quickly sorted in the second half.

The whole chorus was brilliant and it’s an honour to see so much youth talent in the Stoke-on-Trent area. The whole show was beautifully executed and everyone in the creative team should be massively proud of the show they produced as honestly the show could have been professional and anyone of the performers could be on a West End stage in the future. A huge well done to all involved and I wish you all the best of luck for the future and I’ll definitely be at Legally Blonde.