Tonight I visited PADOS Theatre Group in Prestwich and their beautiful studio theatre. A very unassuming building from the outside, but inside it is compact yet versatile and possibly one of the nicest studio venues I have visited in the last year. Tonight’s entertainment was the musical comedy I Love You, You’re Perfect, Now Change, a rarely performed piece by Joe DiPietro and Jimmy Roberts and one I must confess I had never heard of before.

The advertising for the show states “68 characters, 4 actors, 3 musicians, 2 acts.” This is a very cleverly written musical and also very well performed by the cast of just 4. The cast comprising of Angela Grady, Sophie Lord, David Livesey and Ryan McMyler work very hard during this 2 hour show changing costume more times than I could count, but never missing a cue.

The musical examines love and relationships in the form of short scenes that can stand alone, however weave together to form a timeline of life for the two hour show. From young blossoming love and awkward first dates right through to the final scenes showing how love can flourish in the later years of life. The directing from Mark Rosenthal was solid throughout and the pace of the performance didn’t dip as can often happen with a series of smaller scenes and the associated scenic changes. The scene in the car was both genius and played to perfection. 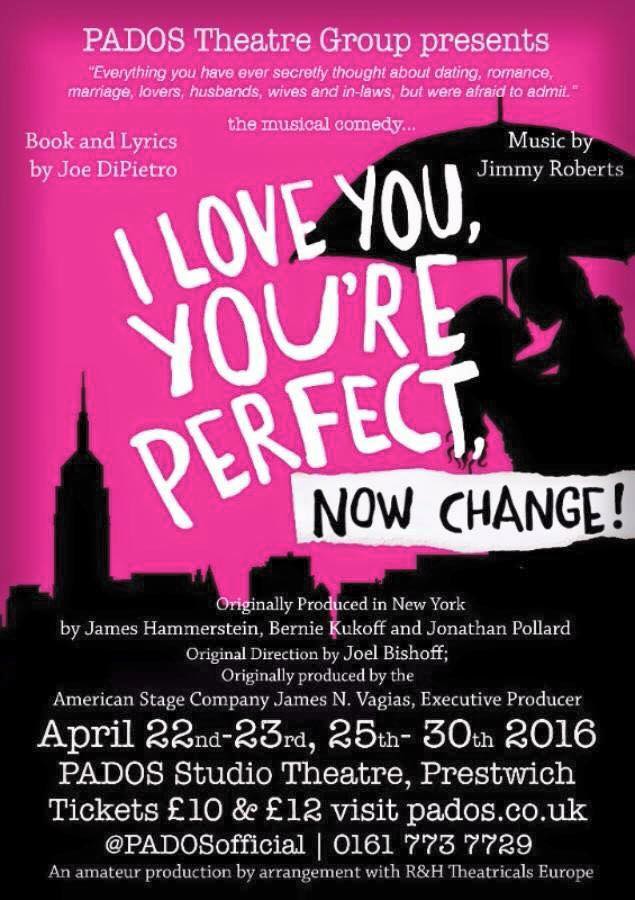 I must say that the stage crew should be commended as there are a lot of scenes in this show (20 in total) and each one had its own set by way of props or small items of furniture that needed to be positioned accurately to ensure they were within the reach of the lighting. From memory, not one item missed its mark, my only concern was where they kept it all off stage as there seemed to be little or no space!

Musically the show is OK, there are some good songs in there, some clever songs but also some that fall a bit flat. “I Will Be Loved Tonight” sang by Lord in act 1 and “Always A Bridesmaid” in act 2 sang by Grady being particular highlights. “Wedding Vows” and “I Can Live With That” also proving particular hits. But for me the stand out song of the piece was “Marriage Tango” in the second act and was performed to utter perfection.

There are many points in this show where you will not fail to connect with what is happening on stage and make connections with your own dating woes and triumphs, and this for me is the appeal of the show. I won’t divulge just how many scenarios I connected with, but there were a fair few.

Returning to the cast, each one played on their strengths making each of the 68 characters believable. The costume changes at times along with a good use of wigs assisted in this with the two women undergoing the most varied transformations. It is maybe a touch unfair to single an actor out more than the other as they all worked so incredibly hard, however for me the star of the show was Lord, displaying strong vocals and a myriad of facial expressions to complement her acting performance.

A three piece band situated at the back of the stage were faultless all night under the musical direction of Sarah Osmond.

Overall this is a fantastic show performed by a very talented cast and supported by a glorious band. I mentioned at the beginning of this review it was a show I had not seen before, I will now add it is one I must see again. I also need to return to PADOS studio theatre, a true gem.

I Love You, You’re Perfect, Now Change continues tonight and then resumes after a day off on the 24th to play all next week. Tickets are still available and can be booked at www.pados.co.uk