I have always been a great fan of Mel Brooks’ The Producers as it was the first occasion I witnessed such dark humour within a musical. The Producers (based on Brooks’ 1968 film of the same name) first opened on Broadway in 2001 with a new musical twist, and this proved extremely popular with the show going on to win a record breaking twelve Tony Awards. Due to this success the majority of the original Broadway cast were involved in the film adaptation of the musical in 2005, which unlike the hugely successful stage show, received mixed reviews upon release. Nevertheless, The Producers has continued to tour and bring in audiences around the world.

The award winning musical follows the demise of a previously well acclaimed Broadway producer, Max Bialystock (James Sidgwick) who manages to entice his sheepish account, Leo Bloom (Fraser Wilkinson) into the world of scamming and debauchery that is Broadway. In their plan of creating the worst show Broadway has ever seen, the two get involved in various sticky and controversial scenarios involving making pledges to Hitler and joining an incredibly camp conga line. 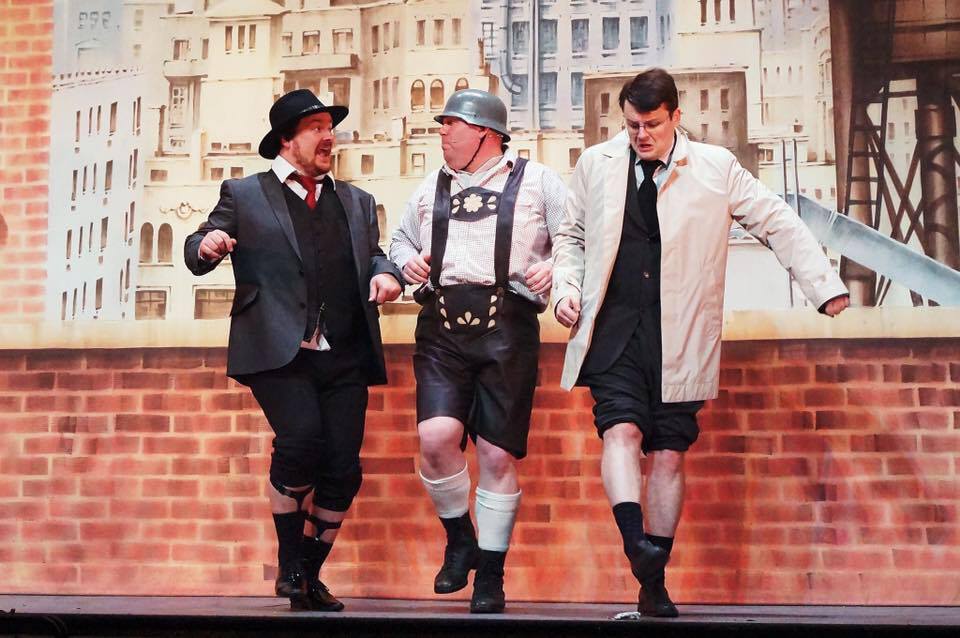 With talented actors such as Nathan Lane and Matthew Broderick in the original Broadway (and film) cast, KAOS (Kippax Amateur Operatic Society) certainly had a challenge ahead of them taking on such a large production. However, with direction from Mark Waters, KAOS provided an outstanding evening of entertainment, with the whole production executed very professionally throughout. The elaborate set pieces and costume collections involved in the production emphasised the slightly offensive yet playful atmosphere intended for the audience. We observed a variety of looks, such as S&M Nazis and boisterous pensioners, all complimented by the enthusiastic ensemble.

In my opinion, Sidgwick executed the complicated role of Max Bialystock perfectly, with a performance that could match any of the talent seen in a professional company. The continuous energy shown by Sidgwick exhausted me as an audience member just watching him. The highlight of his performance was definitely his musical monologue, Betrayed. The exaggeration, variation of mood and breath control displayed in this moment was simply magnificent. Providing the perfect contrast to the role was Wilkinson’s portrayal of the shivering wreck that is Leo Bloom. Leo Bloom goes through a large transformation during the narrative of The Producers and Wilkinson was engaging throughout this transformation, particularly during his emotional breakdowns due to the chaos on stage. The two principle actors benefitted enormously from equally talented supporting roles and a passionate ensemble, with the audience clearly enjoying the dark humour involved in this disastrous narrative. David Hall in particular received ample laughter and appreciation from the audience in his role of the flamboyant theatre director, Roger De Bris. I imagine it is incredibly difficult to perform the role of someone performing the role of overly camp Adolf Hitler, but this play within a play format worked extremely well and Hall’s physical comedy only added to the success.

I enjoy nothing more than a night at the theatre, in which my overly active brain is shut down by a totally immersive and entertaining production. KAOS took on this challenging musical, and with the help of a fantastic cast and production team had the audience laughing from start to finish. It was a lady in the bathroom que during the interval that perfectly summarised the evening's performance in my view; ‘it is very rude...but incredibly funny’.