Two Into One - The Garrick Playhouse, Altrincham

There can be few things more iconic in the recent history of British theatre than The Whitehall Farce, and those expert exponents of this genre, with Ray Cooney being right at the top of the pile. Fallen somewhat out of favour at the moment, this style of farce - trousers down and more tea vicar - has probably had its day. It's appeal is only to reminisce times gone by when actors like Sir Brian Rix would grace the stage and you would see more people in lingerie on hotel corridors than you would in a brothel.

Comedy has moved on. Younger people - in fact more than likely anyone under forty - will never have heard of Cooney, Rix or The Whitehall Farce, and if last night's audience is anything to judge by, then once the current pensioners stop going to the theatre, they will die a natural death. I am not saying that I don't like them or that they shouldn't be performed, no. I am simply saying that they will become products of their time and museum curios to be replaced by current farces and absurdist comedy.

This style of farce requires both actor and audience to accept that grown men can hide behind a newspaper or wear a pair of sunglasses and not be recognised, their behaviour can be completely OTT and inappropriate and it not appear in the slightest odd, and conversations cannot be overheard even if standing next to them. These 'conventions' are the backbone of this particular style of farce - and Cooney was the master. 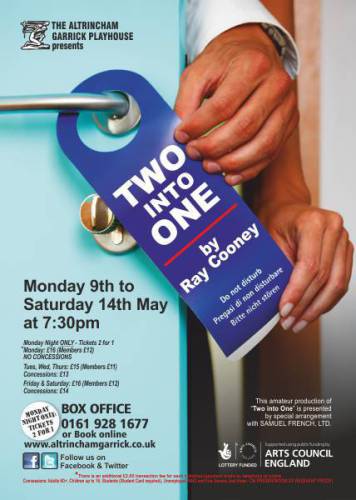 Two Into One tells the story of a politician and his wife staying the night at a hotel in their constituency. The husband has arranged to have a romantic dalliance with a married secretary from another department, and asks his PPS to arrange it for him. Of course thing go from bad to worse and then to complete anarchy as every time someone tries to right a wrong they only compound the issue in true farce style. The time is 1984, and Thatcher is on her 'throne', and there is a big pornography bill going to be debated in the House.

The set design for this production was a good idea. I liked the idea. Sadly it really didn't work too well in practice. The first thing to note was that despite my attending on the second night of the run, flats were visible in the wings: actors could be seen waiting for their entrance behind black curtains and through the door behind the set on the revolve; the exits from the hotel reception stage left were left uncovered and so we could see them step off the set and onto the stage floor and disappear and meet in the black curtain and beyond; a door that should have been able to be locked clearly wasn't or couldn't; and it was possible to see actors in one bathroom from the other bathroom. Using the theatre's revolve the adjoining bedrooms did work quite well, and using stage hands in brown smocks to move the set and sweep the stage also worked well. Sadly though, it was just a little too insubstantial and the exits weren't covered.

The acting in general was of the high standard that one has come to expect from The Garrick. Jonathan Black was the MP who was ready to risk everything for a couple of hours of lust with a younger and sexier model than his wife, and played that extremely tricky balance of keeping it real and hamming it up really rather well. I liked his body language and his mannerisms, and he carried, even when all the odds and fates were most definitely against him, an air of optimism to the end. His wife, Mandy White, again playing that tricky balance between realism and surrealism with seeming ease, and certainly not afraid to throw caution to the wind.

The star of this particular production though was without doubt Mike Shaw's delightful interpretation of George Pigdon. His physicality and comic timing were just a joy. Obviously a seasoned actor who understands this genre, he was able to squeeze every last morsel of nuance from his lines and his character but still managing to remain real and believable. If we are not able to empathise with Pigdon, then the play doesn't work. We were with him all the way. Superb.

These three protagonists were supported by several others who came in and out in true farce style - just appearing without warning and developing the plot. Of these, Christine Perry, playing Lily Chatterton, was my favourite. Her Yorkshire accent was lovely, and her bustling with indignation and mock prudery just right.

The one thing that really irritated me though was sadly the part of the waiter, played here by Dan Ellis. To be fair, it wasn't really his fault. However, the script kept referring to him as Chinese and much of the humour of him being Chinese would have worked and would have been funny if he had indeed have been Chinese. However, Ellis was clearly NOT Chinese, nor did he act Chinese, despite speaking in a broken pigeon English. This is 1984 remember and taking the Mickey out of silly accents and national stereotypes was allowed. No-one had invented the word 'racist' yet.

The directing, (Alan Clements), surprisingly was a little sluggish. It took a while to warm up, and Clements found little humour and pace in the exposition, only really getting into third gear once the cast went to the bedrooms. I felt the pace could have been lifted throughout generally; there were really quite a few too-long pauses without action or indeed waiting for the action. The worst example of this was the 'slippy floor' scene where the waiter is left standing on one side of the stage holding Edward Bristow's walking stick. We all know that something is going to happen because it is so obviously a set up, but it all takes far too long to affect and for so little a pay-off. His work on character, characterisation and their development was very good, but the pace just simply wasn't frenetic enough.

Saying that though, this is still a very good and enjoyable play, conventionally and traditionally presented, and the themes of this play - politics and sex scandals - are just as relevant today as ever.