Richard Everett's thought-provoking comedy was first staged in 2006 with a celebrated cast and Players Theatre have certainly lived up to that billing with their production of Entertaining Angels, right down to the detail of the running water in the on-stage stream.

As a clergy wife, Grace (Krysy Jorgensson), has spent her life on best behaviour including having 'boiled seven-hundred gallons of water, poured two-hundred thousand cups of tea, made four-thousand six-hundred medium-sized quiches and personally baked two tonnes of light crust pastry'. Following the death of her husband she now wonders 'for what?' as we see her revelling in her new found freedom of doing and saying exactly as she wants when the replacement vicar, who has arrived to inspect the new parish and home, turns out to be a woman, Sarah (Anne Wint), much to Grace's delightfully expressed consternation as she also contemplates her own impending departure to pastures new. 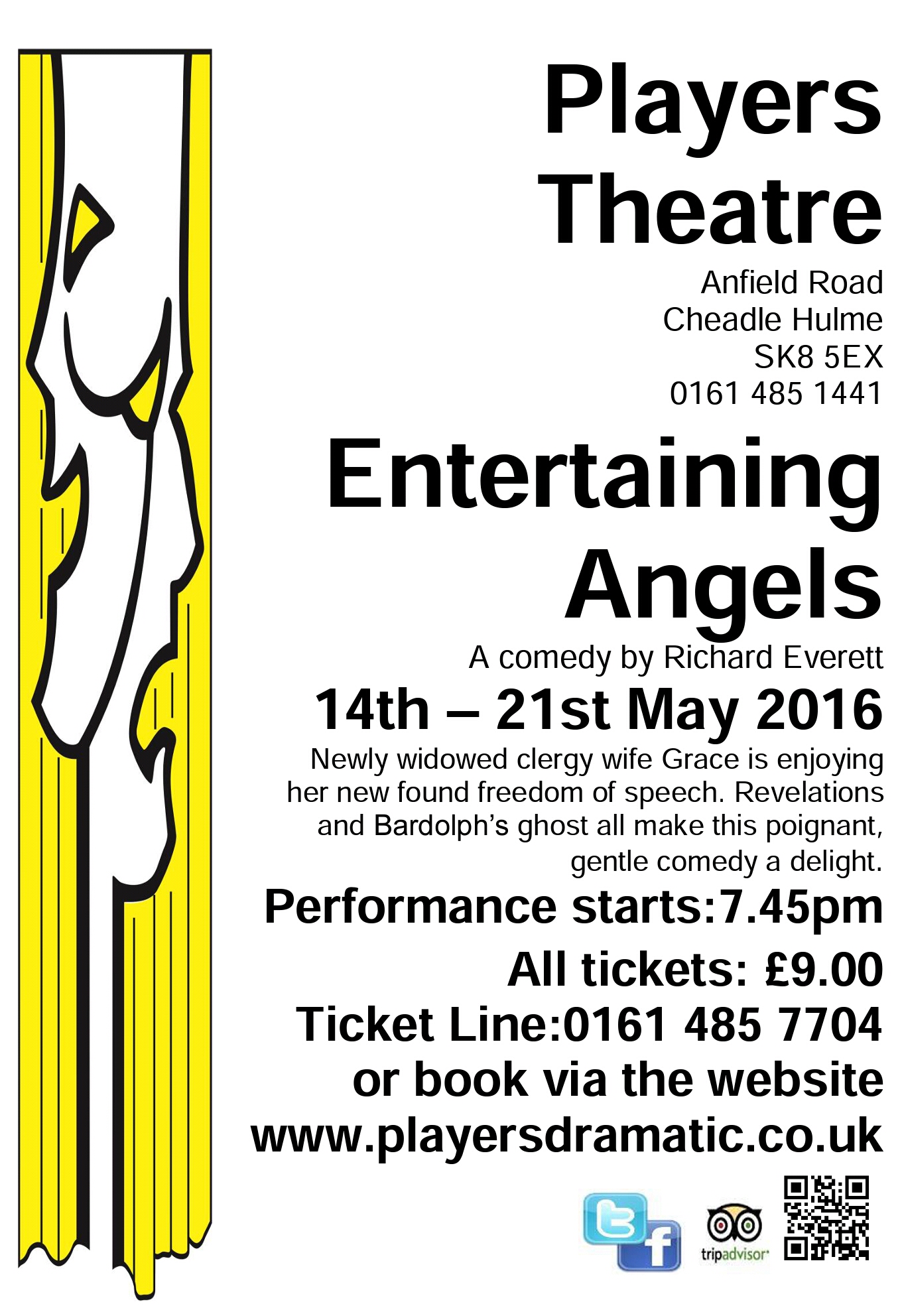 In addition we have, mowing some lovely diagonals, Grace's sister, Ruth (Brenda Brooks), a missionary who has recently returned from Uganda to support her younger sibling in her time of need - until, that is, she throws up some disturbing revelations of her own. Trying to keep everyone on the straight and narrow is daughter Jo (Charlotte Morgan) who is equally caught up in her own marital problems as well as mourning her father.

Oh and of course let us not forget Grace's recently deceased husband, Bardolph/Bardy (Chris Jorgensson), or rather I should say the ghost of Bardy in some scenes and the remembered Bardy in others, who acts as the perfect foil for Grace as she is forced to confront demons at every turn, although this is often misinterpreted as the others observe her apparently talking to herself when she goes into the potting shed to discuss matters with him, something she even questions herself up until the end of the play.

And so set entirely in the garden of a vicarage and played out against the backdrop of a picturesque middle England that has never really left us, the running stream serves as a place for pasts to be recalled and secrets to be shared, as themes of faith, loss, communication and forgiveness are sensitively explored in this delightful comedy which clearly resonated with its almost full-house audience tonight. And I can't say much more than that without spoiling the plot so go and see it.

It is clearly evident from the lines themselves that the part of Grace was written for Penelope Keith, who appeared in the original production, and so much credit is due to Krysy Jorgensson for making the part her own tonight. The obvious natural chemistry with real-life husband Chris Jorgensson as the empathetic Bardy only served to reinforce this in their many scenes together as she learns to let go and he is therefore able to go.

Brooks reflected the eccentricity of missionary Ruth to a tee as we hear how she bats off 'AIDS, abortion and domestic carnage' as part of her daily run-of-the-mill routine. Wint perfectly captured Sarah's self-doubt over her impending new role and questions of faith given her own chequered past.

Whilst all of the cast were superb, Morgan just sneaked it for me with her calm and convincing portrayal of Jo as she mediates between mother and aunt, counsels the vicar and juggles her own grief and problems, all of which served to demonstrate the range of her acting ability following her recent appearance as Liz in Players Theatre's production of Haywire.

The phrase 'entertaining angels' refers to the practice of treating all guests, irrespective of who they are, as if they were visiting angels and is a challenge set to all Christians (Hebrews 13:2). In this context it was refreshing to hear that writer Richard Everett had been in touch with the cast to wish them every success: I can assure him he would be very well entertained if he came to see it.

Players Theatre was founded in 1924 and established its current venue on Anfield Road, Cheadle Hulme in 1949. Following a number of modifications it was fully refurbished in 1985 in just the thirteen weeks that sat between the close of one season and the start of another. Its widened stage belies the intimacy of its 100+ seat auditorium. It has full disabled facilities including a loop system in the auditorium and a stair-lift to the first floor licensed bar and its accessibility is further extended with directional signage on the wider road network leading off from the nearby M56 and M60. A full programme for 2016/17 (September through to May) is already confirmed. In addition they are hosting the Manchester Drama Federation One-Act Festival from 6th - 11th June. Further information is available at www.playersdramatic.co.uk.

Entertaining Angels plays through to 21st May 2016 with performances starting at 7.45pm. Tickets can be secured by calling 0161 485 7704 or book via the website www.playersdramatic.co.uk

Finally I must extend my thanks to the director, Val Middleton-Egan, for her hospitality on behalf of Players Theatre tonight.