Tonight, I find myself in one of my most favourites theatres in all of the word; the beautiful Buxton Opera house with its magnificent carvings and spectacular ceiling, it's the perfect place to take in a play, and that's exactly what I'm here for, to see the Richard Bean modern classic; One Man, Two Guvnors. Tonight's performance was performed by the Buxton Drama League, and although this version didn't star James Corden or a household name as the original on the West End, it was still full of fun, laughter and the silliness we expect from this play.

Without giving too much away, the play focuses on a Francis Henshall played by the capable Anthony Fitzgerald who after being out of work, lands two jobs, but enters a world of 1960s gangsters and even an actor in this comedy based on The Servant with two masters.

Fitzgerald plays the role with comfort and ease, at times I feel he could have been more loveable, and I thought he fit the Frank Spencer role persona a lot better than Francis Henshall in this instance, but then I am used to a more portly version of this character and it may just be my perception of the story, he did give 110% for this role and that should be commended and the audience did get behind him during the participating sections. A 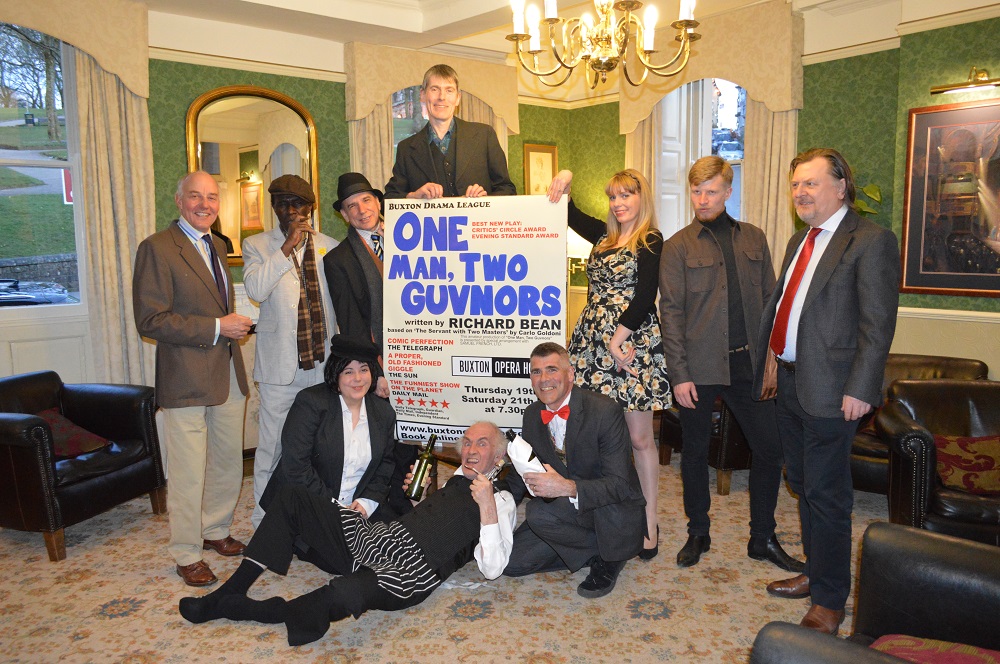 s the play unfolds, we meet his two Guvnors played by Maria Dunford as Crabbe and Tim Warburton as Stubbers, I thought they both played the roles well, with Warburton getting a lot of laughs throughout the night with good timings and expressions. The rest of the cast performed well throughout with Sophie Macbeth who played Dolly being a highlight; Macbeth had the character's personality just right and it came across well on stage.

Felix Newman who played Alan, had the job of acting the part of an actor, easier said than done, he took to it very well and his scenes always seemed very polished; as did Jenny Mather playing Alan's fiancée; Pauline Clench, her facial expressions and mannerisms were brilliant.

This is an amateur performance so I wasn't expecting it to be as slick as the west end version and it wasn't, but it was entertaining, it was fun and I did enjoy it.

The set was quite impressive for a small production and the set changes were not as noticeable with the interlude band playing Beatles and similar throughout, performing in a fun manner which the audience appreciated.

The play includes some great audience participation moments of the show where members of the audience, or as we believe; come up on stage and what Bean does, is really showcase how brilliant British humour is, with all the wonderful awkwardness and nervous tension that a member of the audience on stage brings.

If you’re a fan of amateur theatre, you will enjoy this but you cannot ask too much from a production like this, it isn't James Corden, it offers great value for money and directed well by Geoff Lunn; the whole cast performed incredibly and looked to enjoy it thoroughly, looks like fun; maybe I'll get a second job!