Border Tales is a bold, visceral dynamic attempt to show the lives of multicultural Britain’s today. The company of seven use dance, live music and dialogue to capture what it means to live in post-brexit Britain, which despite the show being first composed in 2013 still has a powerful attachment to the present day. Watching this show leads you through an entire emotional spectrum; you feel embarrassed, uplifted, perplexed, amazed, entranced…… all in eighty minutes.

Luca Silvestrini (Artistic director of Protein and Director of Border Tales) explains how ‘our (Protein’s) shows connect theatrical experiences with the everyday and real-life stories that engage audiences and participants in both on- and off-stage productions’, and Border Tales is no exception.  We see the very real lives of the seven strong cast (Temitope Ajose Cutting, Salah El Brogy, Andy Gardiner, Kenny Ho, Anhar Kharana, Stephen Moynihan, Yuyu Rau), how each culture tries to adapt and incorporate the other, both successfully and not. We see the inherent culture tapped within all of us, the identity we carry around from our fathers, mothers, grandparents. An identity that pours out of us, quite literally in some of Silvestrini’s beautifully choreographed sequences, and hides itself in from its own crippling insecurities. 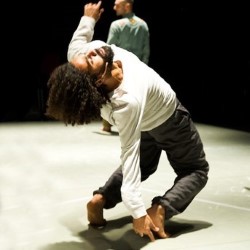 Its tone did feel at the beginning to be too tongue-in-cheek and stereotypical but as the play progressed we soon see the uncomfortable reality of how real these stereotypes can be. It’s hard talking about this subject without wanting to offend, and our stereotypical Britishness - need to be polite and backfooted makes this even more so. The cast have no such restraint, bearing racial stereotypes, ridiculing class and heritage with some scenes being directed entirely to the audience. Some characters were more three dimensional than others but all managed to create a convincing journey throughout. Salah El Brogy and Stephen Moynihan where particular standouts showing sincerity and honest in abundance.

A special mention also goes out to Anthar Kharana who underscored the entire show with music. The haunting quality of his voice sent the whole audience into a deathly silence whilst his delicate and masterful accompaniment added a whole other dimension to the show. A moment of genius was his musical collaboration with Salah El Brogy, a sequence so physically and vocally stunning that we could have let it play all day.

But overall, it’s the movement that takes the lead in this production. It’s hard to place into words how spectacular the movement was throughout the entirety of this piece. Every dancer complemented the other both completely owning their individual movements and moving with fluidity as an ensemble.

What struck me most about this piece of theatre was how it left me. The standing ovation was well deserved but the thoughts that remained with me will last longer than immediate recognition. As quoted before Silvestrini ‘connects theatrical experiences with real stories’, this leaves us to question our attitudes and perceptions towards something which at once might have seemed simple, and Borders Tales did exactly that.

Border Tales plays at Summerhall Main Hall at the Edinburgh Fringe until the 27th. It then tours England during November. https://tickets.edfringe.com/whats-on/border-tales